Baby, you were born to run! 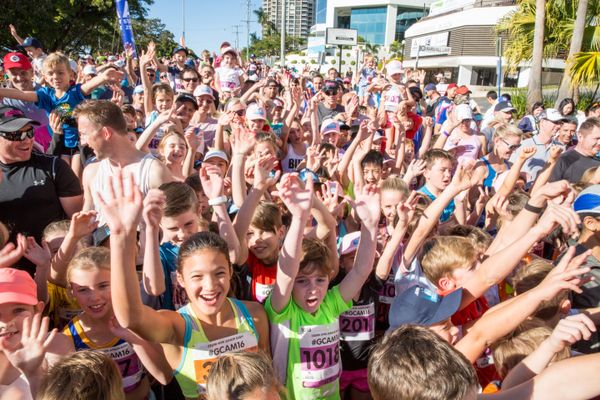 28 June 2018 – Queensland's reputation as a global leader in sporting lifestyle events and fit-cations is driving a “baby” boom of sorts on bucket-list endurance courses across the state.

On the Gold Coast, itself renowned as Australia's sporting golden child, the trend is evident in a record spike in children registered for this weekend's Gold Coast Marathon (30 June – 1 July), including babes in race-ready prams taking on the world's flattest and fastest course.

Great cause for double celebration in the wake of the event's signature race, the marathon (open to runners aged 18+), selling out for the first time in its 40-year history, drawing more than 6,500 competitors, up 35 per cent on 2017. Happy 'Big 40' indeed!

More than 4,000 competitors are travelling from overseas, echoing findings of latest research that positions Queensland as a global leader in fitness and wellness tourism.

Additionally, no age restriction is placed on entries in the 5.7km Gold Coast Airport Fun Run, increasingly punctuated by speed-loving babies and toddlers in prams, while the 10km and half marathon courses are open to competitors with a minimum age of 12 and 15 respectively.

Seven-year-old local Sienna McDonald leads the charge, well on her way to being inducted into the Gold Coast Marathon 10-Year Club before her tenth birthday!

That is, in the 5.7km Gold Coast Airport Fun Run, which Sienna first entered before she could even walk, at just five months of age, in a pram powered by her grandparents.

This year marks her eighth consecutive year in the fun run, with little sister, Harper, 5, gearing up for six in a row.

“We first entered Sienna in 2011 because we thought it would be a cool thing for her to look back on,” says proud father, Ryan McDonald. “If she keeps going, she'll be able to say I was the youngest person ever to get into the 10-Year Club.

“But here's the kicker. She'll likely only hold the record for a couple of years before her sister steals it. Harper started even earlier, when she was three months old.”

Fellow Gold Coast local and mother-of-four, Elizabeth Nipperess, who moved from Sydney 12 years ago, jokes her youngest, Angus, 9, arguably holds the age record in the event's half marathon. She was pregnant with him when she first ran it in 2008.

“So, you could say he did a half marathon before his first birthday,” said Elizabeth, registered for this year's ASICS Half Marathon with husband, Stewart.

“The kids love the whole experience and it's a great way to spend quality time together as a family, to get outdoors, have fun and not be glued to a screen,” Elizabeth said. “Our four kids also train together and get on really well.

“I've lost count of how many Gold Coast Marathon events we've done as a family – it's pretty much one thing we always do together.”

ASICS Global fitness ambassador, Adam 'Adsy' Gordon, who mentors beginner to pro athletes from his Gold Coast base, including working with groups across Australia and in America, Bermuda and Japan, is stepping out for the first time at the Gold Coast Marathon with son, Leo (18 months), in the Gold Coast Airport Fun Run.

“Parents are wonderful role models and can instil healthy habits in their children from a very young age, simply by stepping up and getting active,” Adsy said.

“I started running with Leo as soon as the doctor said it was okay, using a supported neck brace in a top-notch running pram. I really wanted him to see that jogging and fitness activities are a normal part of life – healthy and fun – also giving us the chance to spend extra time together.

“We run about 40km a week, incorporating a great mix of trail and beach-front running on the Gold Coast; a destination packed with open, safe pathways perfect for pram running with lots of water stops.”

To date, Adsy and Leo have completed countless 5km park runs, a half marathon and, most recently, full marathon, coming first overall with a time of 03:02:24. According to Adsy, an unofficial Australian record for the fastest marathon time pushing a pram. Without the pram, his personal best in a marathon sits under three hours (02:52:00), achieved in an IRONMAN triathlon after swimming 3.8km and cycling 180km.

Clock this!
A group of 166 American high school students, aged 15 to 19, travelling to compete in the Gold Coast Marathon's 5.7km Gold Coast Airport Fun Run on Saturday combine to create one of the event's biggest teams.

They form part of a 1,300-strong contingent making the annual trip with US venture, Down Under Sports, to compete in what is best described as a 'mini Olympic-style' tournament on the Gold Coast, also including track and field, volleyball, golf and even American football. Over the past 30 years, Down Under Sports has transformed 60,000 American high school students into Aussie ambassadors.

Not least being athletics world champion (steeplechase), Emma Coburn, who first tried steeplechase on the Gold Coast in 2004, going on to win gold in the 3000m steeplechase at the 2017 World Athletics Championships in London and a silver medal at the 2016 Rio Olympics.

“Like all the kids we bring over, it was a dream for Emma to come to the Gold Coast and literally changed her life,” said Down Under Sports vice-president Brian Pella.

“Our objective is to help these kids live the dream. We used to include Sydney, Melbourne and Auckland in the trips, but in exit surveys the kids always gave highest marks to the Gold Coast. So, about 15 years ago, we decided to come only to the Gold Coast.

“You can't beat it as the ultimate destination – the kids love it. Great weather and beaches. “Kids from Hawaii love the theme parks, which they don't get at home. Kids from Florida who've never seen sheep shearing can go to Mount Tamborine or the Australian Outback Spectacular show.

“We bring kids to the Gold Coast from all 50 US states and they all love getting a selfie with a kangaroo at Currumbin Wildlife Sanctuary or going sky-diving, scuba diving or on a 4WD adventure.

“Seeing the smiles on the kids' faces is priceless.”

Join the Gold Coast's biggest party weekend
The world is literally coming to the Gold Coast this weekend as the tourist strip celebrates the 40th anniversary of the Gold Coast Marathon and star-studded 2018 TV Week Logie Awards (The Logies).

World at our door: who's coming in lycra, not heels!

Lace up!
In Queensland, there's no shortage of world-class endurance events to tackle with family and friends of all ages and ability. In fact, according to the world's most active, happy travellers, Queensland tops their list for bucket-list fit-cations thanks to the state's natural assets (climate, natural wonders, friendly locals) and chance to spend quality time with family and friends.

More than two-thirds of those surveyed celebrated crossing the finishing line at Queensland's 17 endurance events (showcased on the It's Live! in Queensland calendar), with a post-event holiday in 'must-see' destinations including Tropical North Queensland's Great Barrier Reef and world-renowned beaches on the Gold Coast and Sunshine Coast. What's more, 87 per cent were found to travel in tribes, joined by family and friends (58 per cent of whom also competed). Find out more