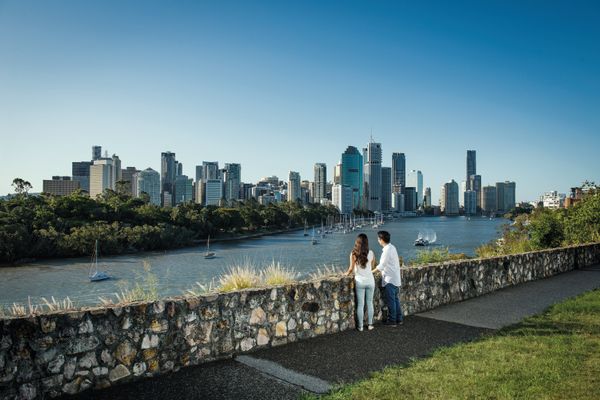 “Clothes make the man. Naked people have little or no influence on society.”
- Mark Twain

Do clothes make the woman?

“Yes, yes! It is true – they really do,” says Masayo Yasuki. Her petite frame clad in a monochrome palette of greys and blacks; always stylish, sometimes quirky, but never too “out there”, echoing conservative elements of her Japanese roots.

As Masayo talks, wide-eyed and elfin-like in her excitement, it becomes clear that the concept of just how clothes “make a woman” is far more than a daily preoccupation, and part of this woman's very fibre; deep to her core.

Tucked away in a buzzing Woolloongabba studio, alive with the whir and clacker of sewing machines and laughter, the creator of cult Brisbane-born label, dogstar, is also delightfully not what you might expect.

In contrast to her bold, edgy designs – created for strong, independent women “who know who they are and what they want” – Masayo is more ethereal-cool than designing diva.

She's never plotted life's big picture. It found her. She gets tongue-tied when describing herself as a “designer”, tripping on the word. And, truth be known, prefers to be the “hidden face” behind the big-personality brand.

“Even sometimes, when I drive the dogstar van, I just want to hide,” she says, mock-covering her face. “Because sometimes people who know and love dogstar might point, and I feel so uncomfortable.

“I'm not a big 'look at me' person; I don't know why. I just don't want to be the focus. I'm quite comfortable not to be seen.”

It is a similar story with the matriarch of Japanese fashion, Rei Kawakubo, whose eponymous label, Comme des Garçons, famed for its deconstructed approach and innate subversion of Western fashion norms, took the world by storm in the 1980s. A uniquely Japanese influence that Masayo takes inspiration from, alongside other pioneering designers like Yohji Yamamoto and Issey Miyake – all of whom featured in GOMA's 2014 summer blockbuster exhibition Future Beauty: 30 years of Japanese Fashion.

Masayo's quiet modesty, however, does not make her an introvert. Nor is she out of touch with a loyal tribe of followers, stretching the breadth of Australia, prompting her to open the first  dogstar boutique off “home turf”, in Melbourne's funky Fitzroy (November 2014).

Instead, Masayo's personality is, in part, a reflection of her Japanese heritage, but also reflects what she describes as an incredible sense of debt to her adopted city and its people.

As she sees it, Brisbane has given her both the freedom and inspiration to discover her calling. She arrived from Japan 23 years ago, “escaping” an IT job that was “never the right fit” in her rural hometown of Fukui.

“I'm still not good with computers,” she jokes. “But I loved watching lots of western movies and always wanted to travel overseas and learn English. Other than that I had no clear direction.”

Masayo ultimately chose Brisbane based on the fact her English teacher in Japan happened to be an Aussie. Once here, she landed a job in a Japanese grocery store and began the slow process of language study: an ELICOS course (English Language Intensive Course for Overseas Students) at Queensland University of Technology (QUT), followed by entry into a foundation program open to international students wanting to pursue a university degree.

“All my class mates wanted to go to university, and so I just followed; it wasn't exactly planned, and I had to borrow money from my parents, which was a big thing.

“You see, I'm from countryside Japan and not many people from Fukui went overseas to study at that time. All parents saved money for their daughters' weddings and so I knew my parents were saving for mine.

“But I'm not a very wedding-type person – you know, I don't like being the centre of attention.”

Now a mother of two young children – devoted, though not married to their father – Masayo used her dowry to fund a QUT Bachelor of Business (Marketing).

It was during that time that fate also decided to give her a shove into the world of fashion. A venture that didn't end well first time round – something Masayo says helped build character and resilience.

“Yes, like the Japanese proverb, fall seven times, stand up eight,” she says with a smile.

Her fall came after she stumbled upon an idea of making “pocket money” by sending end-of-season Australian garments (all small or extra small size) home to Japan for friends to sell privately.

“You know, like a Tupperware party. But then a Japanese boutique in Harajuku became interested and put in a big order. I couldn't source the number of garments they wanted because they were end-of-season in Australia, but I could source the fabric.”

“I went to an op shop and bought a $50 sewing machine and a 1970s text book on pattern making. I taught myself to make a pencil case with a zip, then bought a lot of old seventies fabric and started to make little shorts and flared pants, which sold really well at markets.

“By accident, I made a top that was like an apron that you could change the shape of, which customers loved, and my pants were also popular. Sometimes the right leg was different to the left, and I thought, that's kind of cool – why not? I never learned fashion from school, so everything was okay for me.”

That all changed in 2000, when true to style, Masayo spontaneously decided to rent a boutique space in Fortitude Valley (initially shared with another marketeer). At the time, she had a label in name only, without any clear concept or vision.

Within two months of opening, fate again came knocking. Literally. This time in the form of a holidaying lecturer from Tokyo's Bunka Fashion College – one of the world's most prestigious institutions, famed for producing designers like Yohji Yamamoto, Kenzo and Junya Watanabe (who later became the protégé of Comme des Garçons' Rei Kawakubo, herself untrained as a fashion designer).

“This lady taught pattern making at Bunka and when she walked past my boutique, noticed a Japanese element, so came inside.”

This time fate smiled. The lecturer returned on a one-year working holiday and taught Masayo the art of pattern making, instilling technical know-how behind key hallmarks of Japanese design – structure, sharp lines and flatness – but tailored to fit Australian bodies.

“So, I started to create my own look, through dogstar,” says Masayo, who has since launched two more labels, Laika and Paper Shadow, primarily sold off-shore in New Zealand. She also receives Japanese interns from Bunka and other universities, wanting to help them “find their way”.

For the moment, she's busy finalising dogstar's much-anticipated Summer 2014-15 collection, due for release the same time GOMA raises the curtain on Future Beauty – the centrepiece of its summer season that bows to “Cool Japan”.

Behind the scenes at dogstar, Masayo moves between flights of fantasy (her current muse: steampunk meets futuristic Sherlock Holmes) and “back to earth” grounding, steeped in rigorous quality testing of natural fabrics and design. She even enlists the help of clients to road-test garments prior to release.

“What I love most is when customers come and show me clothes they've had for 10 or 15 years and are still wearing – that makes me so happy because I always want to design timeless pieces.

“I also like to create clothes that can be layered or deconstructed and worn in many different ways, shaped by different personalities. This is because I never really finalise “a look”. I pass that on to you, the client. You finish it and we create a new look together.

Want to get the dogstar look? Visit www.dogstar.com.au for details about the Paddington boutique, online ordering, or drop in and say hello to Masayo at her Woolloongabba studio, which doubles as a warehouse boutique.