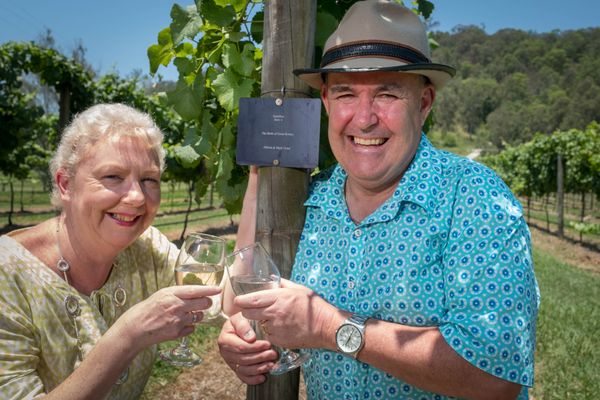 Putting his hand up to help has become a proud habit for Mark Grant.

The 54-year-old business owner from Robina on the Gold Coast was among the first to sign up to be considered as a volunteer at the Gold Coast 2018 Commonwealth Games.

On his track record, there's a good chance Mark will get the nod to help welcome more than 6600 athletes and officials from 70 Commonwealth nations and hundreds of thousands of visitors to the Gold Coast in April 2018.

Mark volunteered at the 1982 Commonwealth Games in Brisbane and also the 2000 Olympics in Sydney.

The avid hockey fan and keen cyclist says getting involved in the Gold Coast's hosting of the XXIst Commonwealth Games, from April 4-15, 2018 was a no-brainer.

“All my life I have been a sports nut and with the Games being in my backyard, I thought why not be part of it?,” Mark says.

“Why just sit at home and watch it on TV? Why not get out and live it, breathe it, smell it and grow with it?

“I love learning about different cultures and we will have athletes, officials and visitors from 70 different countries here at the one time. You'd be crazy to miss it!”

Being involved in major sporting events is also a bit of a family tradition for the Grants.

Mark's late father, Ian “Stripey” Grant, was in the Australian hockey train-on squad for the 1956 Melbourne Olympics, only to miss out final selection due to injury.

He also was a legendary sailing and hockey writer for publications including The Courier-Mail and The Sunday Mail newspapers and his name was synonymous with the annual Brisbane-to-Gladstone Yacht Race.

Mark, who was born in Brisbane and has lived on the Gold Coast for more than 10 years, says his hometown will welcome the world with open arms next year at what organisers pledge will be one of the most diverse and inclusive Games ever staged.

“We are one of the most diverse nations in the world and that's how we grow up. That's how we accept people,'' Mark says.

“Australians are unique because I believe we are so friendly, warm and welcoming.

“Every visitor will be part of our family while they are here and they will go home knowing where the Gold Coast is.”

As a Games volunteer, Mark says he will be telling visitors that the Gold Coast, and indeed Australia, is the “land of opportunity”.

He also will advise visitors that “there's more to the Gold Coast than just the sand between your feet”.

“The Hinterland is so untouched . . . you could be a million miles from anywhere but in fact you are less than an hour's drive from the beach.”

True to his word, Mark and his wife Allison love the Gold Coast Hinterland so much – they bought a tiny piece of it.

The couple “own” a row of Semillon grapes at O'Reilly's Vineyard near Canungra, about 36km inland from Surfers Paradise.

A nameplate at the top of the row signifies their support for the vineyard and they get a case of wine from the first harvest.

“Every time we go down to the beach, or the Coast's great shops or sports facilities, or go up into the Hinterland, I always think how lucky we are,” Mark says.

“That's what I will be telling visitors in 2018 – they really are in the lucky country.”

Former Queensland Premier Peter Beattie, who is chairman of the Games organising committee GOLDOC, said 2017 would be vital in the preparations for the 2018 Games and delivering on the slogan Greatness Rarely Seen.

“We leave behind 12 months of very good planning (in 2016) and head into a new year of delivery that will see us launch more eye-catching elements of Greatness Rarely Seen and some very significant community programs,” he said.

“These include our call for volunteer nominations in February, the start of the international leg of the Queen's Baton Relay in March and the beginning of our ticket sales, the GC2018 Transport Operations Plan and One Year to Go celebrations in April.

“It is our hope that everyone - every man, woman and child in the Commonwealth - gets swept up in the excitement.”