Hanging with the kool kids 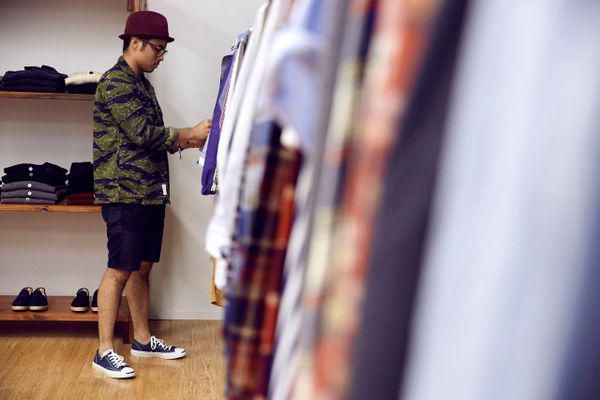 One's destination is never a place, but a new way of seeing things
-Henry Miller

Step foot in Apartment and you start to see things very differently. A destination in its own right for Brisbane's hip and happening crowd, tucked away on Albert Street in the heart of the city.

It's a destination that superstar Pharrell Williams (the American singer-songwriter behind the defining global hit of 2014, Happy) shopped at when last in town. And, he left very happy indeed.

The only destination given the nod to stock cult Japanese label Comme des Garçons, which currently commands centre stage among a who's who of Japan's pioneering designers at GOMA's summer blockbuster exhibition Future Beauty: 30 years of Japanese Fashion.

“To me, street wear is really like a religion because it's a community that has so much more than just the clothing; it's the music, it's the art, it's the food,” continues Nick, decked out in a shirt by another über cool Japanese label, HEAD PORTER, and Apartment's 'home-brand'  jeans (proudly made in Japan).

“When people see Kanye West or Pharell wearing it, they start to understand the context of street wear. But, you know, even people in fashion don't always understand the street wear culture, because it's one of those things you have to absorb in your own time.”

Renaissance-man, Pharell Williams, a leading proponent of street wear culture, recently developed a perfume with Comme des Garçons; a label he hails as 'your favourite designer's favourite designer… the top of the top, the best of the best'.

Nick stocks other Comme des Garçons fragrances at Apartment and, on the surface, tries not to overplay Pharell “popping in”, but was “dancing like a dervish” on the inside.

“We were super chill – we didn't even ask for a photo,” he says. “Ben and I are not like that – give the guy space and treat him like everyone else.”

Nick confesses, of course, that the thought crossed his mind about Pharell being the perfect guest artist to front an A Love Supreme gig.

“How amazing would it be, right? Oh, it would have been ridiculous, trust me. I was kicking myself for days. But we were like, no, that's not cool – he patronaged our store and supported us that way.

“We started the parties because we had a space to throw them, but primarily because we understood that music is an easier way to communicate to people than fashion – and especially in Brisbane, where people can't necessarily understand something just by looking at it.

“The street wear scene here is not as developed as it is in Tokyo or New York. So our aim has always been to build community in Brisbane by offering a mechanism for street wear culture to grow.”

While eighties and nineties fashion was “something else” – and, yes, Nick has banished all memory of it from his wardrobe – he reckons kids had more natural groove back then.

“I think it was better in the 80s and 90s… I mean, the 90s! Oooh, very fun: the disco and the dancing and that's a part of what we're trying to do. Make people dance, because people have forgotten how to dance.

“At our first A Love Supreme gig we had an American hip hop artist. But sometimes it's soul, sometimes it's disco, sometimes it's boogie. We're going to do a Christmas party for everyone on 28 December, because that's when a lot of people are back in town, visiting family.

“We've got a guy called Sadar Bahar coming over from Chicago, who's been in the game for 20 or 30 years, and was one of the original Chicago soul funk DJs who played a lot of the legendary clubs, like Chicago's famous Music Box, in the late 1980s and 90s.”

Born and raised in Brisbane by 'fully westernised parents' – a Chinese mother and Malaysian father – Nick is the first to admit that he wasn't always 'in the know' about street wear culture.

Growing up, he developed his own groove, dressing 'completely differently to friends – just throwing stuff together', but it wasn't until he chanced upon a golden opportunity to study in New York that his life changed forever.

“Actually, it was pure chance,” he says. “I was in a group assignment at university [in 2003], and one guy said, 'I I just went to America on exchange' and I thought, oh that sounds like fun.

“I went to the exchange office and said 'Can I go on exchange?' and that was it. I studied business at university, which made it easy to exchange because you could do anything.”

After six months in New York, Nick returned home with a new-found business concept. Sneakers. He talked Ben into partnering with him to open a New York-style sneaker store, which, by 2010, became the 'Number 1' sneaker store in Australia.

“That was originally where we built our reputation, our name and our connections – and that's how we actually got all the other brands that we have today – because we ended up being one of the top global accounts for all the most forward sneaker releases.

“And then we kind of stopped doing sneakers, because the market changed a lot, and we started being able to get the Japanese brands that actually were exclusive, rather than a product that's now at hype.”

Here, Nick says the Japanese market is renowned for being hard to crack, with top brands and designers selectively choosing who they deal with globally.

“With a lot of Japanese brands – certainly in our scene, anyway, to get the labels that we have – it's all through personal relationships. So, you have to get introduced. It takes time.

“And this is because the Japanese just do things so well – it doesn't matter if it's street wear, if it's high fashion, ceramics or even cooking.

The moral of the story, Nick says, is that you have to truly earn the respect of Japanese brands before they will even consider doing business with you.

Today, Nick works hard and has the highest business ethic. At the end of the day, however, he reckons he's also one of the luckiest guys around, with a job that's “all about the vibe”.

He and brother, Ben, still pinch themselves every day, but have given up trying to convert their father to the “religion” that is street wear.

“Our Dad's been pretty supportive, even though he understands none of it,” Nick says, with a smile. “He's like the classic old Asian dad. He's superstitious and wears the same thing forever because it's good luck.

Experience the vibe: While GOMA has secured a temporary Comme des Garçons pop-up shop during its Future Beauty exhibition, Nick and Ben Chiu's Apartment offers a permanent avenue to buy the cult label alongside a heady range of Japanese street wear. Check it out: www.store.aptmnt.com

Plus, rediscover your groove at A Love Supreme events: www.facebook.com/alovesupreme.co

This Press Release or Biography or Copyright Free Story is supplied courtesy of Tourism and Events Queensland. For more information, please go to www.queensland.com or www.blog.queensland.com. For images, please visit https://visuals.queensland.com/.