Life from the streets: Tokyo style 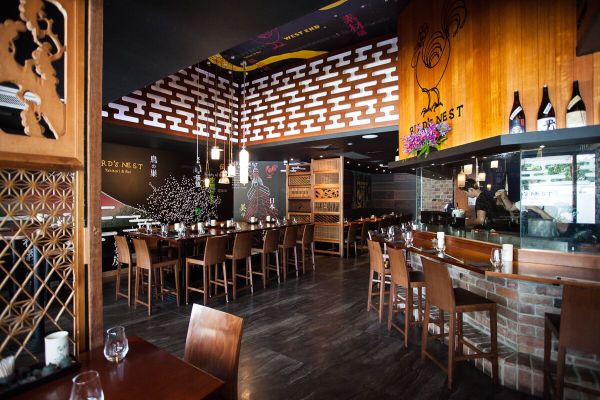 “Grilled chicken – how hard can it be, right?” says Emi Kamada, one half of the kick-ass duo behind Brisbane's new culinary kid on the block, Bird's Nest (Yakitori & Bar) in hip and happening West End.

The girls first noticed each other back in the late nineties, when they were “probably the only two Asian girls” at one of Brisbane's private girls' schools, only to become “besties” after landing jobs together in the hospitality industry.

After more than a decade working for others, including in management positions at luxury hotels, Emi and Marie decided to take a leap of faith and start their own business.

Tapping into their Japanese heritage, they struck upon the novel idea of introducing authentic Tokyo street food to Brisbane. While countless thousand yakitori dens lined the streets of Tokyo, the girls noticed an absence of “the real thing” back home.

Despite always putting in “1000 per cent effort”, they initially presumed that importing the age-old concept of skewered, charcoal-fired chicken would prove a relatively simple, yet culturally meaningful venture.

They were right on the culturally meaningful front, embarking on what they refer to as their “biggest adventure”. Simple? Absolutely not.

“Our first idea was to bring over a yakitori chef,” says Marie.

“Well, you can't! Yakitori chefs mostly own their own shops in Japan. They're all men. They train. They open a 10-seat store with their wives. They cook and their wives serve, and that's pretty much it.”

As a workaround, Emi and Marie turned heads, likely among the first female students to shadow yakitori masters in Tokyo, learning the fine art of preparing, skewering and grilling chicken over white charcoal (Binchoutan). A method of cooking that dates back to the 17th Century.

Day in day out, the girls studied everything from individually weighing each skewer to balancing flavours in the perfect dipping sauce and how to fan charcoal “the right way”.

That was close to three years ago. Today, their persistence and insistence to introduce a truly authentic yakitori dining experience has paid off, already earning them a cult following after opening Bird's Nest in August 2013. They even import white charcoal – from Vietnam, although sourced through a Japanese supplier.

“Our objective in building Bird's Nest was to strike a balance between what you'll find on the streets of Tokyo and the ultimate in fine dining, which you might experience in maybe three or four yakitori restaurants in Japan that have one Michelin star,” says Marie.

“We also wanted to try and make it accessible for the Australian public.”

By “Australian public”, Marie means just that, with plans to grow Bird's Nest even further, into a quality group of restaurants reaching into other states.

“I think we'll start with a second restaurant in Brisbane, as we're nearly maxing out here [in West End], but we also have to balance work with family,” she says.

For Marie this means juggling time between running a restaurant and raising two young boys, aged four and five. She took the boys and her husband (of Japanese-Brazilian heritage) to Tokyo for her three-month immersion with a local yakitori master. Emi, meanwhile, underwent a more intensive one-month course with a different master.

“We wanted to get two different types of teaching and methods, because if we both learned under the same yakitori master, we would come home with exactly the same way of thinking – and we wanted to get more recipes and more ways of doing things,” says Marie.

“My teacher was definitely surprised when I turned up,” she says. “He thought I was going to be a guy because I only wrote using my surname, Kamada.

“When we first met, he was like, 'Oh, you're so young and you're a woman!'. He said he'd never taught any girls or ladies.”

Through hard work, patience and determination – a bit like The Karate Kid, but with chicken skewers – Emi and Marie learned everything they could, returning home with a fire in their bellies and a new-found respect for the “old ways” of Japanese culture in their souls.

“I was born and raised here, in Brisbane, so I'm really Australian and my way of thinking is Australian,” says Marie, the daughter of a Japanese mother (who died from cancer when Marie was 14) and Australian father.

“But Emi was raised in Japan and both her parents are Japanese, so her way of thinking is more Japanese than mine. So, what I found difficult was when my teacher said something like 'This is the way you do it', I always asked 'Why?' – and that's not part of the culture; you just follow and do.

“It's funny, because now when we get new staff at the restaurant, and especially western waiters who come for a trial and ask 'Why are you doing this and why are you doing that?', I say 'I'm telling you, just do and don't ask why – be patient and it will all become clear'.

“So I learned to embrace that side of my heritage a bit more. My sensei (master) told me something for a reason and I learned to respect that and also to respect others.”

The fact that Emi and Marie have also become “just like” their traditional Japanese mothers is an irony not lost on them. A sea-change from growing up in Brisbane (Emi arrived here when she was 10) and begging their mothers to pack them “normal” school lunches.

As Marie recalls: “My mum would wake up at 6am and spend an hour cooking lunch, same as Emi's Mum, because that's a Japanese mother's job, to make a beautiful three-level lunch. A bento box of rice with furikake, then last night's leftovers, a boiled egg and mayo, and some salad on top.

“And chopsticks… always with chopsticks, which I'd hide because I was so embarrassed. Now, I have to laugh, because my son's in Grade 5 and my husband packs him a bento box; his primary school has sushi on the tuck shop menu; and everyone brings rice for lunch, which is a big change from 25 years ago.”

Fast forward… and the girls are busy educating Brisbane diners, encouraging them to be more open and adventurous with their palate. At Bird's Nest, true to the yakitori way, this means using “all the chicken”, including organs – hearts, livers, arteries and even skin (with fat removed).

Emi and Marie pride themselves on using only the freshest free-range chicken and organic produce, describing their menu as “almost 100 per cent gluten-free and vegetarian friendly”.

They've also built a fine reputation for pairing dishes with the perfect saké, thanks to the expertise of an in-house saké sommelier, also stocking a wide range of ice-chilled Japanese beer, shochu cocktails and yusushu (liqueur made from yuzu citrus fruit).

Aside from its unique “foodie” experience and hypnotic waft of charcoal aromas, Bird's Nest's design and décor also creates the sensation of stepping into another world, with its ranma screens and funky lanterns. The girls flew in a Japanese designer three times to create just the right ambience.

On one wall, a message written in Japanese subtly reveals another important aspect of their Japanese heritage; something they stand fast to. In a word: omotenashi.

“That's part of the Japanese way,” explains Marie. “Omotenashi means thinking ahead about all the things people may need. To provide without being asked – even the little things like umbrella bags, a place to store luggage or an oshibori (hand towel).

Want to experience Tokyo street food in style? Bird's Nest is open for dinner (Monday to Sunday) from 6pm to late; and lunch (Monday - Saturday 12pm-3pm). For more: www.birdsnestrestaurant.com.au