May the J-Force be with you 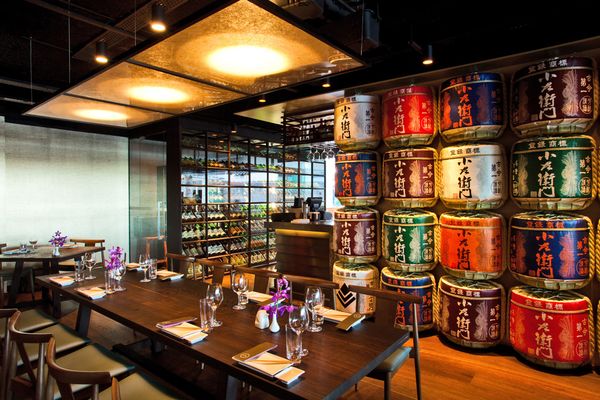 “The Force is strong with this one”
- Darth Vader, Star Wars

At 43, Shaun's more Obi-Wan than Vader, standing firmly on the side of “good”. Indeed, he's never been tempted by the Dark Side – or in culinary terms, fast-food sushi – having dedicated the past 20 years of his life to mastering the fine art of Japanese cuisine.

Today, he's better known as Australia's “Sushi Guru”, also becoming something of a household name on the back of regular guest appearances on TV's MasterChef.

Despite this, he shows no hint of an ego. He still puts in the hard yards; on any given week jetting between Sydney, Brisbane and Melbourne in his role as executive chef overseeing the acclaimed group of Saké restaurants.

Each one branded with Shaun's signature fusion of authentic Japanese cuisine and stellar Australian produce, with a fun, contemporary twist. As he sees it, fresh produce is always the hero and Australia has “what the rest of the world craves”, including his favourite, Mooloolaba tuna.

Yes, the J-Force is indeed strong with this one. This Brisbane boy, who grew up on the streets of West End, before its transformation into a hip and happening hub, finishing high school the year Expo '88 came to town.

By contrast, Shaun's the first to admit it was like travelling to another universe when, in 1994, he borrowed $1,000 from his parents, packed his bag and ventured to Japan. At the time, the closest he'd come to “Asian” cuisine was Aussie icon, the Chiko Roll, which, ironically, his father played a hand in marketing nation-wide.

What happened over the next two years, not only changed his life forever, but the face of Australia's contemporary food scene.

Fresh from university (graduating with a Bachelor of Business, majoring in hotel management, from University of Queensland's Gatton campus) and a stint with the Australian Army Reserve (where he pocketed his cook's trade papers), Shaun landed a job as a kitchen hand in Japan.

A turning point based purely on chance: a stamp-sized newspaper advert that caught his eye after multiple employment knock-backs in Brisbane and on the Gold Coast.

The rest is history, with all the makings of a blockbuster film script.

Shaun's own Hundred-Foot Journey. One that started in the city of Tendō, not Tokyo (as the newspaper ad promised), some 300km north of the capital, before fate led him to Ginzan Onsen (Silver Mountain Hot Spring), a secluded hot spring village, famed as the setting of cult Japanese TV drama, Oshin.

“It's super remote and stunning,” says Shaun. “A village built along a little river, with 14 small ryokans (inns) and a waterfall at the end. No cars, no mobile range, no internet, nothing…”

For the first three months, he was given a job scrubbing volcanic baths. Then came his baptism as a chef, literally learning age-old cooking methods “from the ground up”, whether shadowing village artisans specialising in tofu, fish and saké or wandering up the mountain with elderly women to source  wild vegetables.

A “school of life” experience that instilled in him the ultimate appreciation of locally sourced, fresh produce.

“We worked with what we had, which meant a lot of river fish and mountain vegetables,” he says.” One day, one of the men shot a bear, so we had bear stew. And crickets, sautéed in soy sauce and sugar, are like crunchy chips.”

Shaun's chef gig was a lucky break that came after “mentor”, Jeanie Fuji, an American woman married to the owner of 400-year-old wooden ryokan, had a fight with her mother-in-law, who doubled as the chef.

Shaun, of course, had no experience cooking Japanese dishes and hit the ground running. Over the years, he catered to countless thousand tourists who descended upon the village at weekends (mainly Japanese people on bus trips from Tokyo).

“At the start, it was crazy. There were three menus – the cheap one for one night, mid-range for two or three nights, and a third one with 20-odd dishes. Everything's laid out on a tray, it goes up to the room, door slides across, and you put it down.

“So, it was all preparation, rather than being on the pans or à la carte. And the food was rustic, country-style. I learned to make simmer dishes, steam dishes, and dress dishes; pretty much everything but sushi.

“And the more I understood the culture – and language – the more the people adopted me into their lives, and the more I could see I was going to aspire to learning everything I could about this food.”

Shaun's “education” didn't stop when he returned home to Brisbane in late 1995. Within days, he scored a job at Sydney's ANA Hotel (now Shangri-La), spending five years under a chef he still calls “sensei”, Hiroshi Miura, a master of Kaiseki cuisine (Japanese degustation).

It was here that Shaun learned “knife skills” – three years mastering Kaiseki, then two years on the sushi bar. It taught him discipline and patience.

Shaun recalls he was far more nervous earning the respect of his teachers in those “training” years, than standing before a line-up of celebrities who sat at the bar – among them Keanu Reeves and his Matrix co-stars, who became Sunday regulars while filming in Sydney.

“At first I felt a little freaked out, but I knew I couldn't let that interfere with what they were eating, so I decided there and then to make celebrities feel like real people and make regular people feel like celebrities.”

Over the years, Shaun's rubbed shoulders with many more celebrities and, indeed, people from all walks of life. Honouring the tradition of a true “Sushi Master”, however, he knows the importance of “keeping Mum”.

“When I first got to Japan, I read in the Lonely Planet guide that a sushi chef is the man of the town, especially in small towns.

“His sushi bar is the gossip hub – he knows who's cheating on who and who's gone bankrupt. People go to his bar to unwind and talk. But he keeps his mouth shut.

Everyone gets the “star treatment” at the stable of Saké restaurants, which this month [November 2014] expands to four, with the much-anticipated opening of a second Sydney location in Double Bay.

As he says: “You can't beat it in terms of the view – and layout of the kitchen – and its lovely vibe, with a deck overlooking the river.”

Since opening, in November 2010, Saké Brisbane has also twice picked up a coveted Chef's Hat in the Queensland Good Food Guide awards.