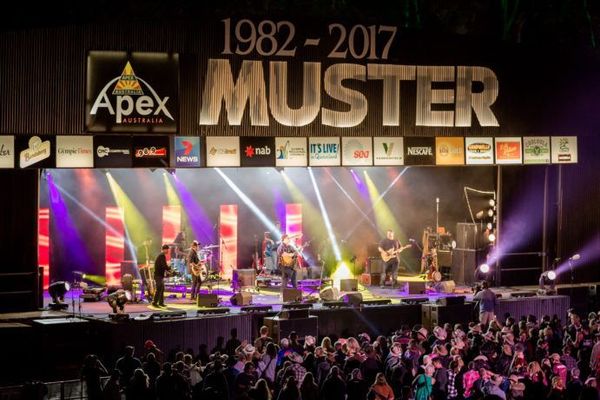 Driving a vintage Volkswagen Kombi campervan is just the start of a loved-up adventure through Queensland's Mary Valley, including camping under a natural forest amphitheatre with close to 27,000 others at Australia's iconic Gympie Music Muster… renowned for more 'true love' hook-ups than Tinder. As Shelley Thomas discovers, love is all around… with even resident platypuses getting in on the action.

“They like to cuddle up when it gets cold,” says Ian Harling of a platypus love-in within cooee of Queensland's idyllic Sunshine Coast, tucked behind the misty mountains of the Mary Valley, just an hour's drive inland from Noosa (or two hours north of Brisbane).

Before he can draw breath, the most peculiar of all Aussie icons – an evolutionary enigma, famously prompting funny man Robin Williams to suggest God must have been tripping – cuts a wake in front of my kayak; more reminiscent of a wind-up bath toy, resplendent with duck-bill and beaver tail.

Having previously searched for platypuses in far-flung locations, I'm rendered speechless. To the notoriously shy platypus, I could be a floating log, causing no alarm as it pootles along, cheeks stuffed, munching on a dawn breakfast collected from the creek floor.

“They swim with their eyes closed and can sometimes swim under the kayak,” says Ian, who started Ride on Mary Kayak and Bike Bush Adventures in 2009. Originally from Surrey, England, he, like so many others, stumbled upon the township of Imbil on a road trip, fell in love with the place and stayed.

Within five minutes of launching from Imbil Bridge, smack bang in the middle of town – the first stop for James Nash, who discovered gold in the Gympie region in 1867, starting the gold rush that saved Queensland from bankruptcy – we've paddled with four platypuses, including one that plops up almost touching my kayak. Now, that's 'gold'!

Winter (July – September), Ian says, is the best time to spot the little monotremes. Why? It's their season to find a mate.

In this neck of the woods, platypuses are not alone in their quest for love. Just over the hills, in Amamoor State Forest, the Gympie Music Muster – Australia's largest charity festival, raising more than $15 million since its inception 35 years ago – stakes its claim as the nation's biggest love-in.

Truth be known, organisers have lost count of love matches at the event – itself a country music treasure in a region that ironically changed its name from Nashville to Gympie. Even multi-award winning Country Music superstar, Troy Cassar-Daley met his missus (Laurel Edwards, presenter on Channel 7's The Great South East and host of Classic Hits 4KQ) at the Muster in 1993.

“I had just finished my spot on main stage and a friend introduced us,” says Troy, who joined this year's artist line-up. “I remember she was beautiful, brunette and sharp as a tack. I proposed to her two years later in the same spot… backstage!”

It's a similar story for Michelle Storey and Clinton Anderson, from Woodford, who met at the Muster in 2006, married in front of the festival's Crowbar seven years later and introduced their daughter, Ariya, when she was just six-weeks-old, in 2014.

“I wasn't expecting to meet anyone, but I thought Clinton was so good looking,” says Michelle of her husband, who moonlights as 'Mr December' in this year's inaugural Muster Men Calendar. “You know, there's something irresistible about a man in a Drizabone and a cowboy hat.”

Muster nuptials have also drawn couples from across Australia, including Tracy and Darren Cummings, from Clarence Town, New South Wales, whose first Muster, in 2012, doubled as their wedding day. They exchanged vows near the Crowbar and lassoed country music star Lee Kernaghan into a wedding snap. He dedicated a rendition of Fire to the happy couple.

“It was incredible; much better than eloping to Las Vegas,” says Tracy. “When we snuck back to our tent that night – our honeymoon tent – our camping neighbours recognised us as 'the couple who got married' and, in the morning, we found all these flowers outside our tent door!”

“We'll see 10 lads sitting around a campfire with couches they've just bought from Vinnies for $20 and they're having the time of their lives,” says David. “Next door, there's a camper van with grey nomads… and they all get on really well. That's what I love.”

For those who love camping, there's simply no better place to pitch a tent, park your camper or book into a five-star tent city, aptly named 'Banjo's Gold', offering everything bar a butler. Hands-down, the showers are the best I've encountered at any festival when it comes to endless hot water across the entire site.

A good thing too when overnight temperatures drop to near freezing – also great for cuddling up around pit fires; dancing with new-found friends; and tucking into an array of gourmet food-truck offerings, from arancini balls to pulled pork and Turkish gözleme. What's more, the Muster, which has never experienced any fights, is also the only major music festival in Queensland still allowed to serve full-strength alcohol.

A firm believer in the journey being part of the adventure, my road trip to the loved-up festival with a group of friends is made all the more special in Molly and Ketut – two vintage Volkswagen Kombi campervans, fully equipped with bedding, pop-up roof, kitchen facilities and board games.

Like all good things in life, VW fan, Paul Ryan, came up with a winning business idea after a few cold beers in the garage one Saturday afternoon – launching Hireadub, only the second venture of its kind in Australia (self-drive category), last October. He currently has five restored Kombis available for hire, but hopes to expand to 15 within five years.

“Initially we were renovating and selling VW Kombi campervans, but you get really attached and it's hard to let them go,” says Paul who moved to Beenleigh (south of Brisbane) from Coventry, England, nine years ago.

“I just love 'em to bits, and it's brilliant to see the reactions from people when they first meet the dubs – I've just had a woman screaming down the phone with excitement.

“We get lots of visitors coming from interstate for surprise getaways… for many, it's a trip down memory lane, a romantic weekend getaway or lots of fun with great mates.”

Molly and Ketut certainly turned heads and melted hearts at the Muster. On the love front, however, Paul says: “We're still looking for Rhonda. A lovely redhead to add to the fleet.”

Set your heart racing: A recent survey of 1,000 Australians by Eventbrite reveals 49 per cent met a 'significant other' at live events. With Queensland home to more than 116 of Australia's best live events in the best destinations, including the Gympie Music Muster, there's no better time to start looking for love in all the right places.

Muster been love: staged each August, the Gympie Music Muster is located in Amamoor State Forest (40km south-west of Gympie). The area is a gold mine for campers year-round, home to more than 120 bird species in its riverine rainforests and plantations of hoop and bunya pines.

Wild at heart? Don't miss a kayak with platypuses in nearby Imbil.

Foodie's heaven: make a pit stop at That Place in Pomona (18 Reserve Street, Pomona), an eclectic venture that is all about 'sharing the love' – bringing together a to-die-for licensed restaurant, microbrewery, permaculture demonstration garden and boutique tattoo studio. #signyournameacrossmyheart
Check it out on Facebook