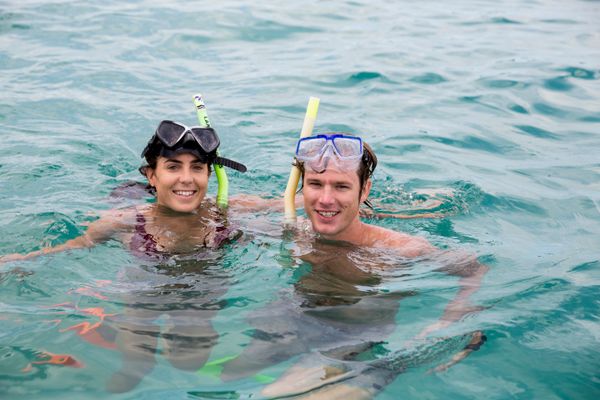 “Just drive north along the beach towards the Cape and we'll put a stick at the top of the dunes so you'll know where to turn in,” the world triathlon No.2 said.

It sounded a bit like those people who tie balloons to their front gate to signify a kids' birthday party inside. What could go wrong?

Like the commonplace birthday balloons, it seems the stick in the dune idea is a favourite idea among escape-seeking campers on the eastern side of Moreton Island, the world's third largest sand island and just an hour's barge ride from the Queensland state capital Brisbane.

After a handful of nervous “this stick or that stick” moments we came across THE stick - and there was no mistake.

Relaxing in the shade in front of their modest canvas tent was Ashleigh and her long-time partner Josh Amberger, also a champion triathlete who competes on the gruelling Ironman world circuit.

A small table, two chairs, a makeshift pantry, a fire pit and Josh's portable espresso maker for his home-roasted coffee completed the rustic surrounds that Ashleigh and Josh would call home for seven days.

No electricity, no shower, no toilet and most importantly and perhaps surprisingly for a couple who are both in their early 20s, no electronic devices.

And for seven days, the triathlon singlet rag would be the closest thing they would have to any connection with the brutal body-challenging sport that has become a successful lifestyle and a professional job for the two young champions.

It is the seventh annual visit to the camping paradise for Ashleigh and Josh who use it as their end-of-season wind down from the pressure and demands of travelling and competing around the world in one of sport's most demanding disciplines – swim, cycle then run, and all three as fast as you can.

“It's the best escape I can think of,” says Ashleigh, who just days earlier was competing in the cut-throat Island House Triathlon in the Bahamas, where the sport's top stars are invited to compete for a staggering $500,000 in prizemoney.

(Ash was fifth of 15 in an impressive finale to what had been a long but hugely successful 2017 season).

Turning off the phone and the constant links to friends and rivals on the world stage is the annual circuit-breaker Ashleigh craves and needs at the end of each season.

“It is so refreshing not having that blue-light exposure every day. You sleep easily at Moreton.

“Being able to switch off and disconnect from the outside world and connect with the people you are with and your surrounds is something that I really enjoy about camping there.

“It's important to have the downtime, it is like a nature escape for Josh and I.

“It is so diverse and sums up what we love about Queensland - being on the beach but also being in the forest and seeing so many different animals and then chilling out by the campsite at night.”

The Moreton Island getaway in early December would be the last break for Ashleigh before returning for intensive training and preparations for the Gold Coast 2018 Commonwealth Games in April.

Ashleigh is in the first event of the Games, and as the highest-ranked competitor in the field, favourite to deliver a golden start the host country's campaign.

It is also her hometown.

She clinched her selection by being the first Australian across the line when she placed second, just five seconds, behind Kiwi Andrea Hewitt in an ITU World Triathlon Series race on the GC2018 course at Southport in April 2017.

Ashleigh went on to win another leg of the series in Montreal to cement her world No.2 ranking and then returned home in November to win the Noosa Triathlon for a staggering fifth time – the last four in consecutive years.

In emotional scenes, she dedicated her win to the late Garth Prowd, a founding father of the event.

It also vindicated Ashleigh's tough decision at the beginning of the year to switch to new coach, Wollongong-based Jamie Turner, and embark on four months of tough racing overseas.

“There was a little bit of uncertainty this year around what would happen and how long it would take to adapt to new training and new environments,” Ashleigh says.

The focus now is firmly on 2018 and her hometown Commonwealth Games – the biggest sporting event in Australia this decade.

“Every race I do when I put on the green and gold, I want to do not just myself proud but I really want to do Australia proud,” Ashleigh says.

“You have to keep fighting on, no matter what is going on around you.

“That's what keeps me going in a lot of the races when it might be a bit tough.”

Ashleigh predicts the athlete and visitor experience on the Gold Coast in April will be like no other Commonwealth Games before.

“There's parts of the Gold Coast that are iconic but it is also so diverse,” she says.

“There's a lot of little hidden gems that people might not think of when they first think of the Gold Coast.

“No matter what you like, whether it is shopping or beaching or exploring the hinterland, the Gold Coast can offer that.”

And her best tip for visitors?

“Ask some locals what they do or where they eat,” Ashleigh suggests.

“Lots of people can get some pretty amazing experiences by just talking to us Gold Coasters.