All Aboard The Pumpkin Island Xpress 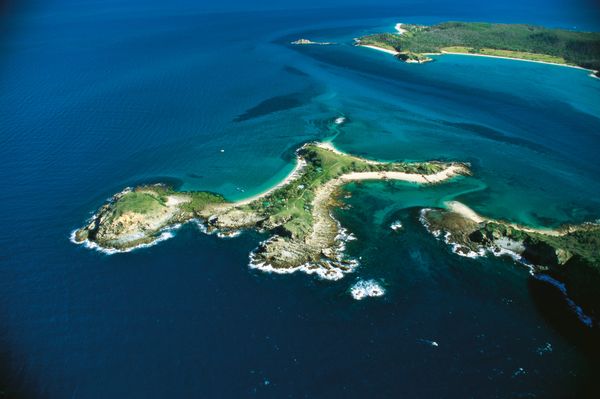 Leaning on the rail of my luxury cabin's deck, I watched the couple on the beach with interest. They appeared at odds. He stood at the sea's edge, willing the incoming tide. She
stood, hands on hips, glowering at their boat, stuck fast on a sea of sand. I saluted the husband's courage with a raised glass of bubbly – it was a hell of a way to get
an extra night on Pumpkin Island.

Pumpkin Island lies north of Great Keppel Island, in the beautiful Keppel Bay, just off the Capricorn Coast at Yeppoon and within the Great Barrier Reef Marine Reserve. It is
secluded and romantic, reminiscent of Fantasy Island. Encompassing 6.1 hectares, it is skirted by coral reefs and prolific marine life.

The island has been privately owned since oyster collector, Snigger Findley, secured it in the 1930s. The fresh oyster stocks are still plentiful.  Local legend says that Snigger lost the Island to the Masons, a Yeppoon family, in a poker game, but reality is the island changed hands for a few bob. The Masons devoted the next 41 years to developing the Island as an unpretentious getaway for families and fishermen. They built five cabins, the last completed in the 1980s.

Pumpkin Island is now in the hands of a young South African couple, Wayne and Laureth, who have recreated the Island as an eco tourism destination with accommodation options
that range from camping sites through to artisan inspired luxury cabins powered by wind and sun.  Island days can be as active, or relaxed, as you like. I opted for a snorkel over a colourful
coral reef in a shallow lagoon where Pumpkin Island and the neighbouring Little Pumpkin Island join at low tide.

I'd explored the area by kayak a few hours earlier and the water was inviting and safe.  The marine life on the reef is prolific. Turtles, rays, dolphins and reef fish abound. Female
turtles lay their eggs on the island's secluded beaches in January, and the eggs hatch in April. Humpback whales can be seen passing both sides of the island during their northern
and southern migration.

My hosts invited me to join a group on a sunset squid fishing excursion. We hauled in two, but the biggest prize was the amber sunset that formed a backdrop for the twinkling lights
of Yeppoon on dusk. I returned to my cabin to unpack the sumptuous feast supplied by the Waterline Restaurant, at the Keppel Bay Marina, in Yeppoon. The Island has no store or restaurant, so guests bring their own provisions.

The Waterline Restaurant offers a range of catering options. My selection for dinner was fresh local prawns and a whole local reef fish marinated with lemon, garlic, chilli and olive oil, with salad.
As my fish sizzled on the outdoor BBQ, the warm breeze rustled palm fronds and waves lapped the crystalline shore, I saw that the tide had rescued the beached boat and the couple had returned to Yeppoon. I wondered what I could do to lengthen my stay on Pumpkin Island.

Getting there:
Fly to Rockhampton. Qantas, Virgin Blue and Tiger Airways operate regular flights from all Australian capital cities.  Travel 42 kilometres north‐east of Rockhampton to Yeppoon. Little Johnny's Tours provide a transfer from Rockhampton Airport to Yeppoon's Keppel Bay Marina, or there are plenty of car rental options at Rockhampton Airport. Keppel Security Car Park provides guests with
both short and long‐term secure car parking. They have drop‐off and pick‐up facilities available and can be contacted on (07) 4933 6670.

Boat transfers to Pumpkin Island from Keppel Bay Marina are available on board the Pumpkin Xpress, which carries up to 20 passengers.
Check out: www.queenslandholidays.com