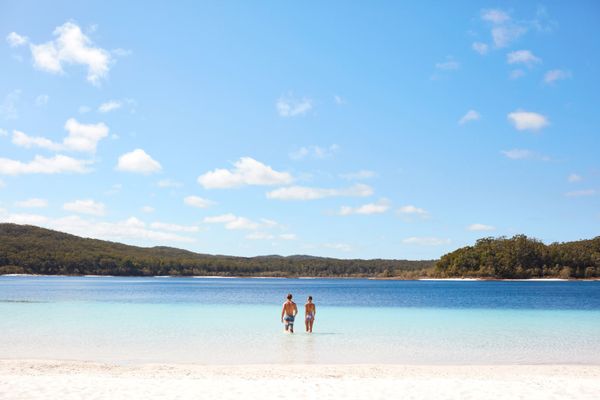 DESPITE being in one of Queensland's premier grape growing regions, this is not really a story about wine. That would be too obvious, and if there's anything that can be said about the South Burnett, it's anything but obvious. Understated, genuine, down-to-earth - yes. But flashy or showy? Never.

This is a tale peppered with characters, entrepreneurs and optimists. Shirt-off-your-back Southern Queensland Country people, the sorts who wave when they drive past you on their wide roads. Where pooches with names like Merlot make it into books about Wine Dogs, but you'd never know it from the look of them. This is a place of dappled sunshine and dimpled smiles. Welcome to the South Burnett.

Fat Hen Farm owner Bronwyn Wood admits she cried when she first moved to the region because it was in the middle of one of Australia's worst droughts. These days, those eyes are sparkling and with a few less worry lines than in her days as a Sydney magazine editor when she dreamed of a tree change.

That change came when she and her husband Alan moved to the beautiful Belle Villa property, along Fat Hen Creek, four kilometres from Kilkivan. It had 600 olive trees, and a glut of the fruit, combined with a lifelong eczema problem, inspired Bronwyn to think more creatively. The result: a skin care product range made from olive oil. Standing outside the old Queenslander built in 1907 and the region's first, it's been a long journey since those crying-on-the-verandah days.

“The countryside is looking beautiful at the moment. Driving through countryside so lush and green is so uplifting,” she says.

“The first week I moved here I sat on my verandah and felt like I was the only speck on earth. But now I know everyone.

“We are trying to create awareness to get people out on the road and visit the area.

Even if you can't get to the farms, visit the café that's using the produce”.

Drive past Kilkivan Meats where you can buy beer sticks, wurst, bilton, cabana and smoked products. Across the road, The Left Bank is the original 100-year-old Union Bank building which has been transformed into a café and B&B. Look up, and you'll see a chandelier of Akubras hanging from the ceiling and the old bank vault is now the office. Bruce, who runs the Left Bank, has sold 5000 jars of his tomato relish which sit along a host of locally-made products and art work for sale.

At Goomeri, the Pumpkin Pie Coffee Shop still sells delicious slices of its tart made from the vegetable which has made this town famous. Further on, amble through towns such as Moodooner, past the Bjelke-Petersen Dam and along the Barambah Ridge Wine Trail to Clovely Estate – the largest producer of Queensland wine, which churns out one million litres on a good year.

Here, you can try Wally Pesudov's “Gypsy Pork” – a dish he has created from local pork which has been smoked especially for him by the Murgon Butcher – they do this kind of thing out here. Eat it in the Old Dairy Restaurant – which, as the name suggests is an old dairy – or in the former hay shed, which is now the cellar door.

In a bold departure from the everyday shirazes and cab savs for which this region is famous, Wally also produces a rare Italian Nebiolo wine which he describes as a “full-bodied, medium-coloured red.”

“People grow shiraz and cabs and merlots and it is so common and we just wanted to be different so we picked the best that Italy has,” he says.

It's a similar tale being told at Kingaroy's Taste South Burnett where Manager David Gillet says the region is on the edge of a wine revolution, eschewing its more traditional varieties such as Shiraz, for lighter, Italian styles more suited to the climate. Think: Sangiovese, Barbera and the Nebbiolo that is being sold at Clovely Estate.

“The oldest vines out here were planted in 1995. We are in a fantastic position to experiment. There is so much happening in the South Burnett wine industry at the moment,” he says.

“Without realising it, we are recognising that Italian styles are going to be the way forward for us.”

Hillview Cottages owner Cathy Davis, who describes herself as a “tourism activitist”, and her husband Steve have recently built “Paddock Practice”  - a 200 metre golf swinging range. It just adds to the ambience of this property whose four buildings clock up a combined age of 290 years. That's the house, plus dairy, church and cottage that have been converted into accommodation which celebrates each of the building's original heritages.

“We just saw these beautiful simple buildings and fell in love with the place. Everyone who comes out here comes out for the simple life. We've tried to capture the history here and the presence,” she says.

“There's not too many communities that have what we have to offer within 2.5 hours of Brisbane and the Sunshine Coast.

“We are really self-sufficient here without being too big or too small. This community doesn't happen without people. We see tourism as a huge economic driver for this region.”

Over at the Captain's Paddock Café, the menu is largely based around the peanuts for which this region is famous with dishes such as spicy peanut soup and peanut pesto. But it's Maryanne Pidcock's shiraz and chardonnay jellies which are creating a new taste sensation.

Maryanne saw the mechanical grape harvester was damaging the grapes at the end of each row, so turned those grapes into jelly to be served with their savoury and sweet scones.

“It was an unintentional success,” she says.

“As for the peanuts on the menu, it is such an obvious connection with the region.”

At local state schools dotted around through the valleys, the kids are country skinny, spindly childhood legs doing for what they are designed: running, playing tiggy, lungs full of that clean air you wish you could bottle.

Serpentine, Emu, Wallaby, Dingo and Fat Hen. Stop in for an ice-cold beer at an historic pub that has stood the test of time.

It's emerald green out here and the dams are brimming again. And so, too, are the people. With that quiet confidence, the hallmarks of this region.