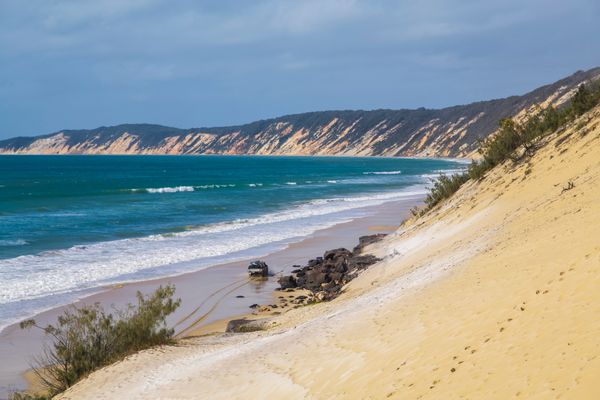 Rainbow Beach may be the gateway to the world famous Fraser Island for most people, but for some, it's a real dive ­– of the most spectacular kind!

The famous coloured sands, which draw tourists as they motor their way up the beach highway to reach Fraser Island, also act as markers to two spectacular dive sites, Wolf Rock and Round Bommie. They are, however, recommended only for experienced and Open Water accredited divers, not for novices.

Located about one kilometre off Double Island Point, Wolf Rock barely breaks the surface ­– but what lies beneath is one of the most impressive dive sites in Southeast Queensland. My most recent dive at Wolf Rock was simply spectacular. Upon entering the water the visibility was around 20m, which allowed us to see a large school of barracuda moving off into the distance.

Descending onto the rock we decided to swim around the sheltered southern side, which drops straight into 30m of water. Following the wall we quickly spotted many beautiful deepwater corals, including black coral trees, soft corals and spiral sea whips. The fish life mainly consisted of reef fish - including angelfish, butterflyfish and morwongs.

Wolf Rock is made up of five pinnacles lined up almost north to south. The two at the southern end break the surface, and heading to the north the others get progressively deeper. Moving up the eastern side we explored the gutters between each pinnacle, finding more bushy black coral trees.

Reaching the northern most pinnacle we found ourselves in the current line and surrounded by an explosion of life. A dozen spotted eagle rays were hovering over the pinnacle; as we got closer they broke formation and started to swim circuits around the pinnacle, it was like watching the Roulettes perform at an air show.

Looking down to the gutter below, two Queensland gropers started moving in our direction. These large fish, over 2m long, came in close to inspect the bubble blowing visitors. Looking around there was a constant influx of fish, schools of batfish, trevally and surgeonfish were sweeping by, but we could also see sweetlips, bream, angelfish, goatfish, globefish and fairy basslets.

Suddenly out of the blue a bronze whaler shark zoomed in with effortless grace. I was ready with my camera to photograph this streamline predator, but as with most sharks it shyly turned away about 8m from us. The whaler made two more passes, but always kept its distance. We then drifted with the eagle rays for a while, swimming in midwater with these majestic creatures.

Grey nurse sharks can be seen here almost year round. Today, though, the main attraction was a school of Queensland gropers. First one, then four, then six, then eleven. Swimming around us were 11 massive gropers. These amazing giants were once senselessly killed by spearfishermen, but are now fully protected.

As we headed back to the anchor it got quite dark, like a cloud was passing. I looked up to see a dense school of trevally, hundreds of then swimming in a tight formation. But as quickly as they appeared they were gone – and the light returned.

We spent the final minutes of our dive looking at some of the smaller critters that live at Wolf Rock; including moray eels, nudibranchs, gobies, scorpionfish, sea stars, shrimps and coral crabs.

Summer is one of the best times to explore Wolf Rock as both grey nurse sharks and leopard sharks are at their greatest numbers, plus manta rays are also likely to be seen.

Also located off Rainbow Beach is Round Bommie, a large slab of rock rising from 15m to 6m. Surrounded by sand, Round Bommie seems to attract marine life like a magnet, making for some wonderful marine encounters.

The rock is a large oval shape monolith, about half the size of a football field, and the best way to explore the site is to swim circuits around the whole bommie.

On the sand at the base of the bommie you'll usually find schools of stingrays – blue spotted, black blotched, cowtail and leopard stingray species are all common, and easily approached for photographs, along with huge flatheads, flounder, large white spotted shovelnose rays and dozens of leopard sharks over the summer months.

Watch out for spotted eagle rays, at times a dozen or more will sweep past, or if a current is running they may just hover in formation. Manta rays also cruise near Round Bommie, occasionally stopping to get a sprucing by the resident population of cleaner wrasse.

At the eastern end of the bommie is a cave where sweetlip, lionfish, squirrelfish, stripeys and the odd estuary groper can be found. This is also where a couple of huge Queensland gropers can be seen. They are more likely to appear when the water is a little dirty, and suddenly loom close, give you a wary once over, and just as quickly disappear.

Loggerhead and green turtles are quite a familiar site around the bommie, and are found sleeping on the bottom or feeding.

The top of the Round Bommie is well worth a look, as here there are many ledges that shelter a variety of species. Morays eels, wobbegong sharks, cuttlefish, nudibranchs, cowries, sea stars, feather stars and shrimps.

There is also a very healthy population of octopus. These masters of camouflage are difficult to spot at times as they can change their skin colour and texture to blend in with any background.

Visibility at Round Bommie can vary from 5m to 20m. The site is generally washed by currents, but they are never strong enough to stop you enjoying a brilliant dive.