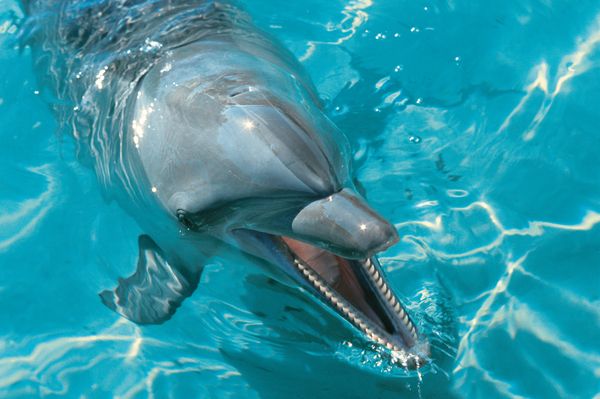 Jason Brigden is every bit the skipper. Scanning the horizon with an eagle eye, he's looking for a group of dolphins using the tide, the time of day and the topography of the sea bottom along with a special sense he's developed for finding these creatures in their natural habitat.

"You never know what you'll find out here," he says, never taking his eye off the sea. "The day we figure it out, we'll quit!"

Jason and his wife Virginia operate Whalesong Cruises and Jason has come to know this big bowl-shaped body of water backwards.  He takes people out all year round; when the whales leave town, there are plenty of lesser known marine creatures to discover. Jason says he is continually fascinated by the way things change, not only from season to season, but from day to day.

Fifty kilometres from top to bottom and “another” stretch of sea at first glance, Hervey Bay is partly designated as a marine park and is home to a surprising variety of marine wildlife. Much of it lives out of sight, but the larger and more gregarious creatures seem to enjoy sharing their lives with humans, especially the dolphins, who live here year round unlike their enormous cousins who only visit.

Jason can show people four types of dolphins in Hervey Bay, with the most common being the two types of bottlenose dolphins – the smaller ones found mainly inshore and the larger further out to sea. Then there's the sousa, also called the Indo-Pacific humpback, which comes from their habit of arching their backs when they leap out of the water. Less common are, oddly enough, the common dolphins, which Jason usually finds up at the northern end of the bay.

Then there are five varieties of sea turtle, green, loggerheads and hawksbill being common and the flatback and leatherback more rarely sighted.

Close to the Fraser shore, in the seagrass beds, live the shy, vulnerable dugongs, which are very hard to spot because they live mainly in muddy water and are not gregarious. Also under the briny waters are manta rays, eagle rays and sharks, but you'll have to be sharp-eyed to see them.

Much more obvious and always a pleasure, are the birds – pelicans, curlews, terns, pied oystercatchers and snipes winging about.

Whale Song cruises are strong supporters of the idea that if people fall in love with nature, they'll be more likely to help protect it. Jason is keen to show people that the marine environment is as deserving of protection as any other ecosystem.

"I used to shoot as a kid and I was into game fishing at one stage, but now I have come round to believing that we need to protect wildlife and that goes for marine wildlife as well."

"Hervey Bay is a great destination," he says, as he throttles back the engines at the sight of a pod of playful dolphins. "And it's a great day out on the water whatever you see, but I'd like to see some research done on dolphin numbers and the state of their habitat so we can be sure we're doing the right thing to keep them here for people to enjoy."

The people on today's trip certainly seem to be enjoying themselves. They rush forward when a crew member sings out that the dolphins are bow-riding, rush back to the stern again when the playful creatures decide they prefer surfing the wake, and then sit with rapt attention on the trip back to port, watching the videos taken with an underwater camera of the dolphins surfing the bow of the boat that day, reliving the experience.