Following the footprints of whales: My not-so-secret humpback obsession 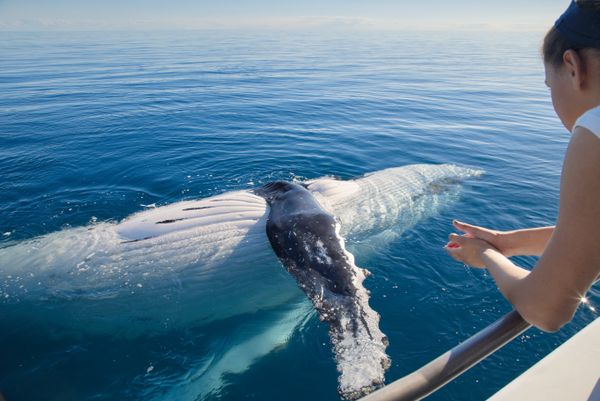 If Guinness had a record for the most number of times on a Hervey Bay whale watch boat, then Sue Brown of Port Stephens would be a definite contender for an out-of-stater. This retired mother of three lives in Port Stephens - arguably the Mecca for whale watching in New South Wales - but, like her forty-tonne humpback counterparts, chooses to migrate north to whale watch in warmer waters over winter.

“I've never really been an animal person and I don't actually know how it all started,” Sue says of the whale watching addiction which has seen her ride the Hervey Bay whale boats more than 50 times; snap more than 10,000 humpback photos; hang five whale canvases in her bedroom; purchase a four-foot humpback statue for her hallway; and have two songs written about her obsession.

“I guess I was living in Sydney about 13 years ago when I saw a TV program about how absolutely amazing the humpbacks were in Hervey Bay,” she said. “Back then, the whale watching wasn't that good where we lived - in fact, you were lucky if you saw anything when you were out on the water.”

Self proclaimed as the whale watching capital of Australia – and with good reason as the region pioneered whale watching in the country – Hervey Bay is the only place on the planet where humpbacks indulge in a genuine rest-stop during their gruelling annual migration, making it a really special place to watch whales.

Armed with holiday inspiration, Sue promptly booked her first ever whale watch from Kingfisher Bay Resort and was, she says, instantly mesmerised.

Awe-inspiring, spiritual and life-changing: something about these gentle ocean giants captured Sue's soul and trips north to Hervey Bay for the winter soon became permanent fixtures on the Browns' holiday calendar.

“I fixate on things I love doing – like my beloved Sharks football team, I never miss a game. It was the same with humpbacks. After that first time, we went up every year except when my children got married.”

Sue says she tried her sea legs on several boats in the Hervey Bay fleet over the years before chancing upon Captain Keith Reid and the crew of Freedom III. It was the start of a beautiful friendship that has spanned more than ten years and four times that many whale trips.

“Captain Keith is a funny, funny man and the crew were just so lovely and made me feel instantly at home. Now, I go up for two weeks at a time and go out every day with them. I get really disappointed if I don't see a breach. I just love the breaches,” she laughs.

Whales are such a constant in Sue's life that she recently brought her family up to celebrate her sixtieth birthday aboard the Freedom III, where she was promptly serenaded with her very own whale song by deckie, Bill Bailey. Sue says that was just another highlight to add to a very long list.

Smitten with their Hervey Bay holidays and the friendships, the Browns started whale watching their way around the globe – Canada, Alaska, in Western Australia and from cruise ships – but Sue says the experiences just don't compare.

“I was in Canada telling the whale watching staff about Hervey Bay and they'd all say “yeah, we've heard about it, we really need to get there”,” she said.

“You just can't beat the intimacy of the experience off Fraser Island.  You can go out in Port Stephens and you'll see a whale, but I've never had a good whale experience anywhere else because they are on the move.”

“It's different in Hervey Bay. The humpbacks aren't migrating, and watching them in the glassy water is magical - they just glide with ease.”

Humble little Hervey Bay has been creating a steady buzz in the tourism world for the quality of its humpback experiences for thirty years, but it's also the planet's most important habitat for endangered whales with a whopping 95% returning to its safe waters each year.  The region is also the only place in the world where more females than males are seen moving south, which is why local operators are lobbying to have the region officially recognised as a Whale Heritage Site and sanctuary.

“In Hervey Bay, I've see mothers and calves approach the boat, had double breaches and four spy hops – when a whale rises vertically in the water – all at once,” Sue said. “I've never had that anywhere else. I just love watching them. I always want to see more, which is why I keep coming back.”

She's not kidding.  The ink's hardly dry on this year's booking and Sue has already locked in dates for 2018.

This year around 55,000 people are expected to clap, cheer and hoot their way onto the waters of Hervey Bay in a sure-fire move to attract the humpbacks' attention from July until the end of October when the season officially closes.