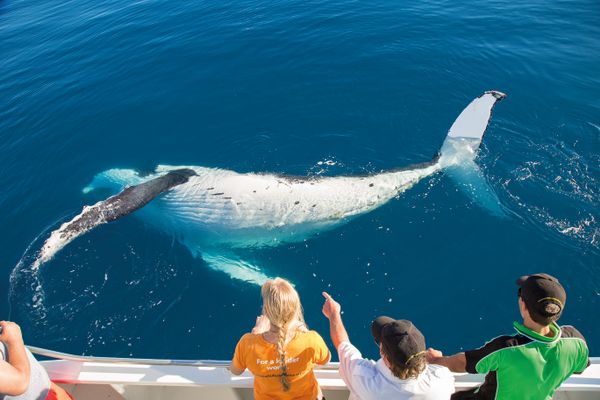 She might not have the bulging physique of Arnold Schwarzenegger, but Fraser Coast local, Pam Swain, maintains there are hidden health benefits to frequent whale watching in Hervey Bay. And she should know. - the veteran humpback watcher has been on the whale watch boats so many times in the last thirty years, she says she lost count after the 150th cruise.

“Whales are really attracted to movement so you put your right hand up, you put your left hand up, you charge around the boat and you do it all over again until the whales come for a look and so they stay once they arrive,” she said.  “Some people call the encounter a mugging, but I call it a whale watch workout.”

Pam and her husband Paul travelled from Derbyshire, in the UK, to Hervey Bay in 1988 at the very start of the humpback whale watching revolution in Hervey Bay and emigrated in 1991.

“The very first time I went, they used a spotter aircraft to go out and locate the whales and they'd drop toilet rolls back then so the vessels would know where to go. It was a source of great excitement for those of us on-board,” she said.

“Up close, the eye is beautiful – it's tiny and in proportion, but it's lovely when they roll it slightly so they can eye you up. I love their beautiful tails – all spotted and barnacled. I love the folds in their belly and, when they pec slap, you can see the nodules on the surface – it's almost like they are waving at you, you know.”

Pam was smitten from the first but husband Paul was instantly banned after a couple of outings.

“Twice he came out with us, but he was banned because he's bad luck,” Pam says of her preference for solo cruising.  “I tend to keep to myself on the boat, but the crew normally points me out. A few days ago, some visitors called me the Whale Whisperer – I don't mind, it's as good a nickname as any.”

As seems to be the way in Hervey Bay, guests not only form emotional attachments with the whales – Pam's had the privilege of naming a calf, Goodwill, after the 2001 Goodwill Games that were on at the time – but also with the boat crew, and often come back year-after-after year chasing the ultimate humpback high.

Being a daredevil at heart, Pam says she quickly graduated from the bigger boats towards Peter Lynch, skipper of one of the smallest boats in the fleet, the Blue Dolphin.

“I went out on a research boat for a week and that was incredibly wonderful as you have the ocean to yourself after all the other vessels have gone,” Pam said. “The first night we had a whale singing all night. You could hear it through the hull and the vibrations kept me awake all night, but it was lovely.”

“Then, I went out with Skipper Pete aboard the Blue Dolphin last year on a day trip and one whale was singing so loudly, that we didn't need a hydrophone.  Another time, whales exhaled and we saw a beautiful rainbow dancing across in front of us and heard the little growls – it was wonderful.”

“Quite often on Pete's tours, we'll sit down to lunch and suddenly there's a whale right next to the boat. Food flies everywhere as cameras and iPhones are grabbed, and I just think to myself, ahhh this whale wants a krill sandwich."

Pam says that visiting friends and relatives who've never whale watched before tend to gravitate to the bigger boats, while she prefers the intimacy of the 11.6m catamaran.

“I try to persuade them for the smaller vessels by putting them in a headlock, but not everyone wants to get so close to these giants,” she laughs.

“I do. I just like being out on the water and seeing them so close and, of course, that first blow. I just can't put it into words – the excitement of watching such a large, gentle animal and, when they spy hop, they really are looking at you, looking at time – it's spiritual.”

Back on dry land, the award-winning romance novelist uses her experiences out on the calm waters off Fraser Island as inspiration for her short stories and was actually on-board the Blue Dolphin when Skipper Pete met the woman who would later become his wife.

“I said to Pete “Oooh there's a little spark there”.” And he said: “I think you might be right,” she laughs.

There's also a definite spark when it comes to the spiritual connection that Pam has felt with Hervey Bay's humpbacks from that very first visit - to the point that she just hasn't felt the need to chase whales anywhere else.

“Hervey Bay is just the best place to go,” she said. “Oh look, I wouldn't know anywhere else, would I? But I don't need to go anywhere else.”

“It's so calm in the bay and crystal-clear. Then you spot that initial blow and you see the whale and the white of their belly and it's beyond beautiful. I really was addicted from the start.”

“When we moved to Hervey Bay, I got a job here pretty quick, but it interfered with my whale watching,” she laughs. “I've been retired for three years now, so I'm back in the game.”

It's not a word of a lie. As she tells her whale tales, Pam's multi-tasking and checking Bureau of Meteorology forecasts for the following week so she can book her next workout.

Don't wait for hump day to join the humpback migration in Hervey and treat yourself to a little Queensland wintery warmth. The whale watch season runs until the end of October, when the last of the whales turns tail for the nutrient-rich Antarctic waters and toned whale watchers start marking the days until the start of the next season.

Visit http://www.visitfrasercoast.com/whales for all your humpback holiday needs.