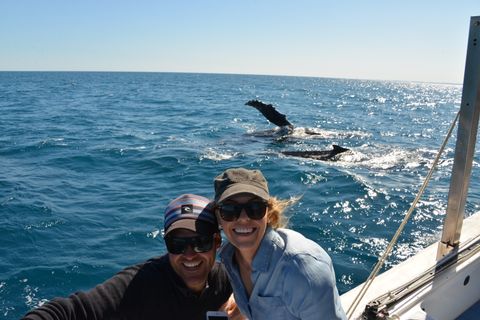 FRASER COAST: In a scene that could be straight out of a Hollywood Rom-Com, a pretty girl named Janette strikes up an online conversation with a charismatic boy named Tim, who lives in a different town. Sparks fly and, after two-and-a-half months of intense chatter, they decide to meet smack-bang in the middle. Enter Hervey Bay, the start of the humpback whale watching season and a boat called the Blue Dolphin.

In these parts, coming eyeball to saucer-sized eye-ball with Hervey Bay's humpbacks has a profound affect on watchers… some weep or whistle, others sing with joy, some laugh out loud in the moment and, a select few, fall in love… for life.

For Janette Irwin and hubby, Tim, their tale of sea-duction has the happy movie-style ending and their first official date aboard the Blue Dolphin went off without a hitch despite the knowing glances from crew.

As Skipper Peter Lynch says: “they came eye-to-eye at the back of the boat, shook hands and were inseparable for the rest of the day.”

“Humpback females send very clear behavioural signals to males that they're looking to mate and males, in turn, sing to woo their women, so I reckon we witnessed the human equivalent that day,” he said.

“The both loved the water and the whales and were in a totally safe environment, so it really was the perfect seduction.”

There were nerves and excitement when the big date day finally arrived, but Janette says it was all for the humpbacks as she knew Tim and her would be firm friends. What she didn't expect was other lasting friendships to develop on the water.

'You cruise for around 45 minutes from shore and then for four or five hours you have constant whale activity around you. They come up close and they go under the catamaran, and you're in absolute silence as you watch these mammals, that are metres and metres long, cruise around the crystal-blue waters.”

“Every sense you have as a human being is overwhelmed by the humpbacks,” she says. “You you can hear them, you can feel them, you can taste them when they spray, and you can smell them – it's incredibly fishy, but you're really not thinking about that at the time.”

“There's an energy that comes from it all, your whole body buzzes and you're sharing it with strangers, but at the end of the day, you become the best of friends because of it.”

First impressions clearly count and it seems Tim and the humpbacks were a winner.  The Irwins married in July 2015 and spent their anniversary and honeymoon back aboard the Blue Dolphin, almost three-years later to the day from that fateful first date.  They're returning again in 2017 for their fifth anniversary and another spot of humpback watching.

“We're local celebrities,” Janette laughs as she explains how a photo from the couple's second trip on the Blue Dolphin graces a giant whale watching billboard near the Hervey Bay airport.”

"We have such a great time here that we have decided we'll come back every two years and do it over," Janette said. “But this year we're bringing Canadian friends who love wildlife and always have the worst luck with seeing animals. We've told them they can't go wrong in Hervey Bay.”

It seems that love actually does rule the roost aboard the Blue Dolphin, not only with the incredible humpback encounters, but in the romance department too. Skipper Pete also fell victim to Hervey Bay's silent sea-duction when he met his wife whale watching aboard his own boat.

Jodie travelled again in 2001 and love blossomed out on the water.  Pete just laughs when asked if he's deliberately playing cupid or whether there's something mystical happening on his 'love' boat.

“Whale watching is such an emotional experience and Blue Dolphin offers small, intimate encounters that resonate with romantics, that's all.”

Hervey Bay's whale watch season runs like clockwork every July to October and offers up some of the most intimate humpback interactions on the planet. And from all accounts, the human-to-human encounters aboard the Blue Dolphin aren't too bad either.

For more information on the best deals or romantic getaways on the water, visit http://www.visitfrasercoast.com/whales.