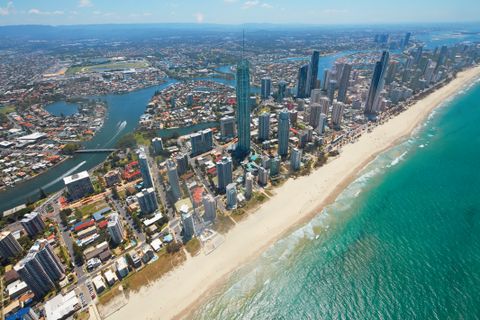 Gold Coast is a city riding an exciting wave of change.

Glitz has made way for sophistication. Adventure, discovery, healthy living, innovation and the arts are now firmly weaved into the fabric of the country's fifth largest city.

Welcoming the world for the Games has reaffirmed the Gold Coast as a world-class destination.

And the journey of transformation is far from over.

There is no doubt the Gold Coast will shine during the 2018 Commonwealth Games – no major games have ever been held in such a stunning beachside location.

An estimated 1.2 billion viewers around the world will see the region showcased like never before.

More than a million Games ticket holders will experience the Gold Coast first-hand, many riding on the $5billion G-link light rail network.

The legacy of the Games will be even more impressive. And it will go far beyond stadiums and venues.

From the changing skyline of Surfers Paradise to the trendy cafés of Burleigh and the laid-back vibe of Kirra and Coolangatta, the Games have raised the bar higher than ever.

The Gold Coast, as a place to live and a destination to visit, is booming. The coastal city is once again a magnet for investment.

The $345 million expansion of The Star Gold Coast Hotel and Casino is a prime and proud example.

It's new tower, known as The Darling, is the Coast's first six-star hotel and just the start of a proposed $850 million upgrade and expansion of The Star's Broadbeach property.

Across the road at Pacific Fair, a $670 million upgrade has taken the Gold Coast landmark into a new era of retail experiences.

The complex now has more than 400 stores (including numerous high-end labels) across a staggering 14,500 square metres which includes a stunning outdoor leisure and entertainment precinct.

The Commonwealth Games arts and culture program, Festival 2018, will add a further layer to the legacy.

The association with Festival 2018 has ensured the Gold Coast's annual Bleach* Festival has been elevated to an unprecedented level of world-class arts and entertainment.

The live music scene is electric with venues including Night Quarter and Miami Marketta leading the way with integrated food and entertainment.

Top chefs have also brought their awarded hats to the Gold Coast while the city boasts a bevy of boutique brewers.

The Coast's film industry is buzzing again and, of course, the Gold Coast is the new home of the Logies.

Annual events including the Magic Millions, the Airport marathon and the Quiksilver Pro, to name just a few, have already highlighted that the Gold Coast is a successful event location.

Hosting a major international event like the Commonwealth Games was as deserving as it was inevitable for a city with a proven can-do attitude. It begs the question, what's next?

Whatever the answer, there's no doubt everything Gold is new again!