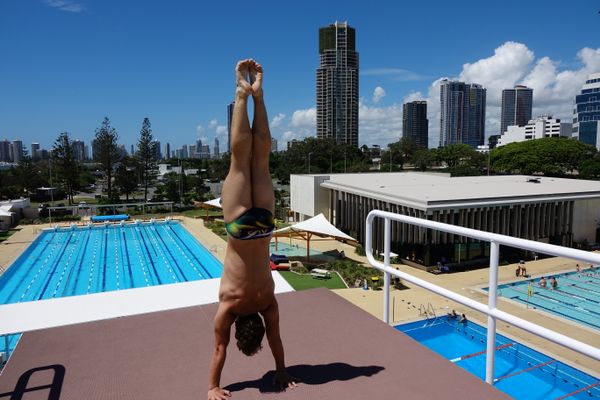 This is the gold medal view that awaits Domonic Bedggood and fellow divers if they are selected to compete at the Gold Coast Commonwealth Games next year.

The Gold Coast Aquatic Centre in the Southport Parklands is not roofed like many Games pools in the past.

That's because the Gold Coast enjoys, on average, 300 days of sunshine each year.

With a sun-drenched climate like that, who would want to swim or dive indoors?

And the 10m diving platform at the Aquatic Centre is the perfect perch from which to take in the spectacular views that surround the Games pool.

To the south is the world-famous Surfers Paradise skyscraper skyline. To the north is the Southport Broadwater and Parklands that will host the GC2018 triathlon competition.

“It's an amazing view and will be great for people watching on TV, but I am thinking divers during the Games will have their focus on what they have to do to perform to their best,” Domonic says.

Domonic lives and competes to a simple motto: “Limits, like fear, are often just an illusion.”

And the 21-year-old Gold Coast resident has pushed himself to the limits, and beyond, to achieve success.

It has been a back-breaking commitment – literally.

The former Belmont Primary and Holland Park High student first tried diving after he broke his back in a frightful fall while doing high-bar gymnastics.

And he stared any fears directly in the face by becoming a specialist in the 10m platform dive – where any mistakes can see a diver crash into the water as if hitting a concrete pathway.

In Domonic's case, under the guidance of expert Belarusian coach Sergei Chinkar, it has been all grace and skill with his efforts including a gold medal in the 10m synchro with Matthew Mitcham at the Glasgow 2014 Commonwealth Games.

Domonic, who lists super healthy Acai Bowl as his favourite food, also dived at last year's Rio Olympics (12th in the 10m platform) and won a silver at the 2015 Spanish Grand Prix.

He is hoping to maintain that form and earn selection for the Gold coast 2018 Commonwealth Games.

And when it's his turn to do hand-stands on the 10m platform, keep an eye out if he peeks at the view before tumbling into the pool below.