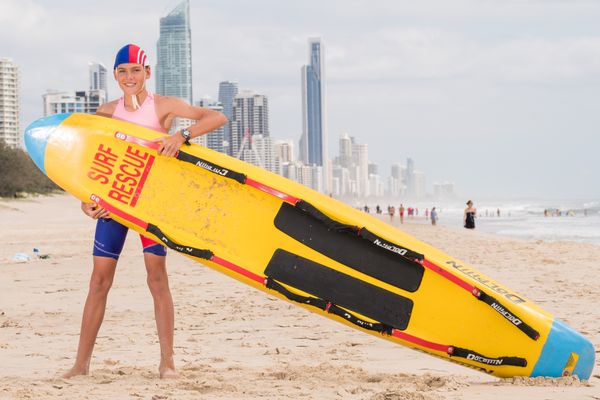 Share the Dream is the slogan for the 2018 Commonwealth Games on the Gold Coast. Teenager Gabriel Pither is already living it!

As a 10-year-old, Gabe was the “Gold Coast kid” - representing the city's youth – in the Gold Coast's presentation during the Closing Ceremony of the 2014 Commonwealth Games in Glasgow, Scotland.

He danced with pop star Jessica Mauboy, chilled with surf champion Mick Fanning and smiled into the cameras in a telecast beamed worldwide to millions.

Three years later, as the countdown clock ticks towards One Year to Go to the GC2018 Opening Ceremony (April 4, 2017), Gabe is more than ever still a typical Gold Coast kid.

The now 13-year-old is not only living the Gold Coast dream but is thriving in an outdoor healthy lifestyle that has produced so many sporting champions – hurdler Sally Pearson, swimmer Cameron McEvoy, sailing's Mat Belcher, tennis player Sam Stosur and surfing's Fanning, to name just a few.

A surfboard atop a Kombi van during March's launch of the Queen's Baton Relay from Buckingham Palace and the surfboard countdown clock at Surfers Paradise prompted an approving nod from young Gabe.

The Emmanuel College Grade 7 student rides a surfboard whenever the Surfers Paradise swell is pumping and is a surf lifesaving Nipper at Mermaid Beach, specialising in beach sprinting.

He also plays AFL football and field hockey (a 2018 Commonwealth Games sport) for club and school.

His ties to the Commonwealth Games even run through his family.

His dad Cameron represented Australia in rugby 7s at the 1998 Kuala Lumpur Commonwealth Games (winning bronze) and in 2002 in Manchester.

As the Queen's Baton continues its 388-day, 230,000km journey from Buckingham Palace to Carrara – the Gold Coast suburb where the main stadium is located –  the Ashmore-based Pither family are typical of the growing excitement across the Gold Coast as the city prepares to stage the biggest sporting event in Australia this decade.

In addition to Gabe and dad Cameron, mum Vivienne and sisters Charlotte and Lucca are all eagerly awaiting the launch of the full Games program on April 4, 2017, and the first round of ticketing on April 24. They want to attend as many Games events as they can.

As the typical “Gold Coast kid”, Gabe is proud that his hometown is about to host more than 6600 athletes and officials from 70 countries in the XXIst version of the four-yearly sporting event that brings together the British Commonwealth.

Many are already tipping that Gold Coast 2018, with its surfing koala mascot Borobi, could be the greatest-ever Commonwealth Games.

“This is going to be a massive event and being able to stand there and say 'this is my city' will be amazing,” Gabe says.

“The Gold Coast is beautiful,” he says.

“We've got everything . . .  theme parks, great restaurants, beaches, you name it, it's here on the Gold Coast.”

And his advice to GC2018 visitors is to take the plunge and have a go at riding a surfboard.

“Don't be scared of the wave and paddle for it,” Gabe advises.

While Gabe's matter-of-fact advice possibly simplifies the finer skills of surfing, there's no doubt the Gold Coast surfing schools will be in high demand over the next 12 months leading into the Games.

Several operate daily on beaches including Surfers Paradise and Rainbow Bay. For a list of surfing schools go to destinationgoldcoast.com

To watch the pros carve up the waves when the swell is pumping, get a blanket and a picnic lunch and find a spot on Burleigh Headland, Kirra Point, Greenmount or near Snapper Rocks.

To discover how surfboards are shaped, take a tour of Richard Harvey's Miami beach shack studio gallery where he handcrafts boards (http://www.harveysurf.com/) or visit the Mt Woodgee surfboard factory at Currumbin, one of Australia's leading surfboard manufacturers (http://www.mtwoodgee.com.au/).