From timber to tourism: How the Gold Coast become an international icon 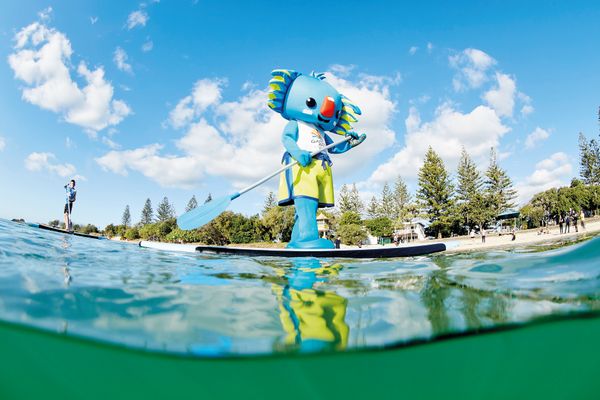 1770: Captain James Cook noted the region as he sailed past in the HM Bark Endeavour and named prominent landmarks Point Danger and Mount Warning, great for sightseeing and hiking. The peak of Mount Warning is the first Australian mainland site to see the sun each day. In 1882, explorer Matthew Flinders sailed past on his way to circumnavigating and mapping the continent but it wasn't until 21 years later that explorer John Oxley landed at what is now called Mermaid Beach.
http://www.visitgoldcoast.com/places-to-see/mermaid-beach

1840: Government surveyors charted the region but in those days settlers weren't really interested in the surf beaches. They were attracted to the Gold Coast Hinterland and its rich supply of red cedar which were harvested and hauled by bullocks back to Brisbane for use in ship building.
http://www.australia.com/en/itineraries/qld-goldcoast-hinterland.html

1865: The inland township of Nerang (named after the local aboriginal word neerang meaning 'shovel-nosed shark') was surveyed and established as a base for the timber industry. Four years later, farmer James Beattie established an 80-acre (32 hectares) farm on the northern bank of the Nerang River, just south of an area which the Kombumerri people called jarri parila (today's Narrowneck).
http://www.visitgoldcoast.com/places-to-see/nerang
http://www.gold-coast-beaches.com.au/narrowneck-beach.html

1885: Governor of Queensland, Sir Anthony Musgrave, built a seaside home near Southport, setting a trend for the Coast as a fashionable resort for the wealthy and influential. His name is recognised in northern Gold Coast landmarks including the suburb of Musgrave Hill, Musgrave Park, Musgrave Community Garden and Musgrave Avenue.
http://www.goldcoast.qld.gov.au/thegoldcoast/musgrave-park-27389.html?override=true

1987: German immigrant Johann Meyer, after buying the Beattie farm in 1877, built a private ferry service over the Nerang River and established the Main Beach Hotel. He soon realised rather than the hard toil of farming, money could be made by providing accommodation and services to travellers. He financed his new ventures by selling what he called the Main Beach Estate. A syndicate bought the land and subdivided it with new streets (sandy tracks) named after world champion scullers of the day: Edward Hanlan, Edward Trickett, Elias Laycock and Thomas Clifford. All four are streets in Surfers Paradise (between Surfers Paradise Boulevard and Northcliffe Terrace). Thomas Clifford's link to the Coast also was the inspiration in the named of Clifford's Grill & Lounge at Watermark Hotel. By 1889, Meyer's Main Beach Hotel was declared a postal receiving office, officially titled Elston. The historic name was the inspiration for the naming of Elston Winebar and Restaurant.
http://www.surfersparadise.com/

1902: Spurred on by the building of a train line from Brisbane to the region, Southport was established as a town in 1902 with an initial population of 1230 (28,315 in the 2001 Census). It quickly became the business centre for the region and a holiday destination.
http://www.visitgoldcoast.com/places-to-see/southport

1917: A parcel of land, north of First Street in Broadbeach, was offered for sale under the name Surfers Paradise Estate. The offer failed, partly because access to the area was still difficult at that time, but the name caught the eye of Brisbane hotelier Jim Cavill, who bought five acres (10 hectares) of land in an area known as Elston - the place we know now as Surfers Paradise. Cavill opened a 16-bedroom mock Tudor hotel at the intersection of the South Coast Road and the old coach track which ran from Meyers Ferry to the beach, what is now known as Cavill Avenue and Cavill Mall. A popular attraction at the hotel was a local dog, which became known as Matey, who would accompany patrons home as they walked back from the beach. A bronze statue of Matey can now be found in Cavill Mall, which was created into a mall in 1976.

1925: A road linking Brisbane to the beaches of the Gold Coast was completed which sparked an accommodation revolution on the Coast with new hotels opening at Elston, Miami and Burleigh Heads. A year later, under Cavill's patronage, a surf club was established which later would become Surfers Paradise SLSC, which still provides surf safety patrols on the famous beach.

1933: After extensive lobbying by Jim Cavill, the area known as Elston was changed to the more glamorous Surfers Paradise. In 1936 the original Surfers Paradise Hotel burned down and was replaced with a more grander structure with art deco styling and its own zoo which included kangaroos and other local wildlife.

1936: An emergency air landing strip was created at Coolangatta for planes flying between Sydney and Brisbane in the same location as what is now Australia's seventh busiest airport, Gold Coast Airport. Regular flights between Sydney and Melbourne to Coolangatta didn't start though until 1947. The air strip was upgraded in 1982 and a further upgrade of the terminal facilities, including the installation of air bridges, is currently underway.

1949: All the beach hamlets along the Coast decided to join as one local council entity to become the South Coast Town Council. It wasn't until October 23, 1958 that the region adopted the name Gold Coast Town Council. On May 16, 1959, the Queensland Government proclaimed the Local Authority of the city of the Gold Coast although it took until April 1980 for the Place Names Board of Queensland to officially gazette the place name. the City of Gold Coast which is now home to more than 550,000 residents and welcomes 12 million visitors each year - and of course, the host city for the XXIst Commonwealth Games in 2018.

1950s and 60s: This was a period of rapid development of the region as a tourist and holiday destination. In 1954 the Coast's first motel was built, the El Dorado, on a site on the Gold Coast Highway now occupied by the Crowne Plaza Hotel. The first Surfers Paradise high-rise Kinkabool opened in 1960 as construction boomed from Southport to Coolangatta as the region became known for its relaxed, fun and glamorous lifestyle, attracting Hollywood stars including Laurence Olivier, Vivien Leigh, Audrey Hepburn and Lauren Bacall. Kinkabool still stands in Hanlan Street and was heritage-listed in 2009. The canal estates of Paradise Island, Chevron Island and Isle of Capri were part of the development boom in the 60s while recent developments such as Q1 and Oracle continue a history of innovative high-rise development which is ongoing with the construction of the spectacular three-towered Jewel Residences on the Esplanade.

1952: While the invention of the bikini is usually credited to Frenchmen Jacques Heim and Louis Réard in 1946, there is no doubt the Gold Coast's Paula Stafford led the introduction of the navel-exposing swimsuit design. Paula and her husband Beverly lived on Surfers Paradise Beach and originally ran a beach hire and massage business. She made clothes on the side and her designs quickly became popular. The astute businesswoman then played a masterstroke in marketing when she got a model, Ann Ferguson, to walk down Surfers Paradise Beach in one of her bikinis. Authorities directed Ann to leave the beach as her swimsuit was deemed (at the time) “indecent”. The controversy created a huge stir and Paula's bikinis were suddenly in huge demand. It was an era when the Gold Coast began building its reputation for fun. In 1957, Bernard Elsey started pyjama parties at his Beachcomber Hotel then in 1965 convinced his receptionist to be the first bikini-clad Meter Maid, dropping coins in local parking meters to avoid tourists enjoy themselves on the beaches from getting fines.

1972: Sea World, the Coast's first so-called theme park opened although it had been proceeded by the Jack Evans Porpoise Pool at Snapper Rocks, Coolangatta, which in the late 50s and 60s gave tourists the chance to feed marine life and view sharks. Currumbin Wildlife Sanctuary opened in 1947 by beekeeper and flower grower Alex Griffiths who fed the local lorikeets as a ploy to keep them off his prized blooms. In 1976, the Sanctuary was donated to the National Trust of Queensland. In the decade from 1981, three new theme parks opened Dreamworld (1981), Wet'n'Wild Gold Coast (1984, originally as Cade's County Waterpark) and Warner Bros. Movie World (1991) helping to make the Gold Coast the theme park capital of Australia.

2005: The Gold Coast is recognised as representing an important part of Queensland's history and cultural heritage and given icon status by the National Trust.

2007-2011: With some of the world's best surf breaks, dozens of surf, surf lifesaving and paddle clubs and plenty of outdoor space, the Gold Coast lifestyle has long been linked to sport and sporting achievement. The region boasts world champions across a range of sports including men's and women's board riding, golf, motorsport, sailing and triathlon to name just a few. In 2007, the Gold Coast Titans made their debut in the National Rugby League following on from previous rugby league teams in the region including the Gold Coast-Tweed Giants, the Seagulls and the Chargers. In 2011 the Gold Coast Suns debuted in the Australian Football League.