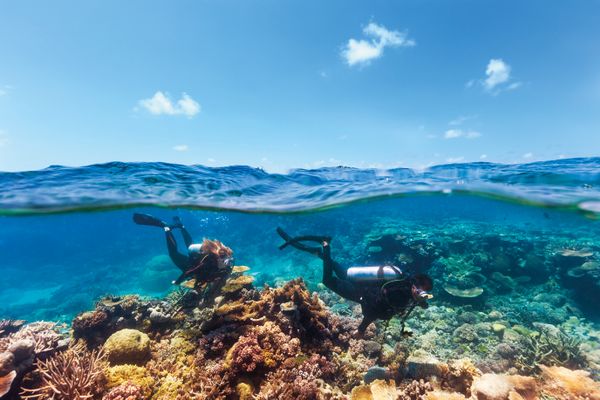 The Great Barrier Reef, in many ways, defies description. The biggest structure ever built by living things and the only one visible from outer space; home to one of the world's most complex and uniquely diverse ecosystems; and, a destination, as Sir David Attenborough attests, that is “better than travelling to the moon…”. But what exactly defines the Great Barrier Reef's outstanding universal value as betrothed by UNESCO when it joined the list 35 years ago?

A very big deal: Bigger than 70 million football fields, the Great Barrier Reef is arguably the largest coral reef system that has ever existed and, in 1981, was the first to be inscribed by the United Nations Educational, Scientific and Cultural Organisation (UNESCO) on its World Heritage List, topping all four natural criteria. At the time of inscription, the International Union for the Conservation of Nature noted: “If only one coral reef site in the world were to be chosen for the World Heritage List, the Great Barrier Reef is the site to be chosen.”

Tall order: While it belongs to “all the peoples of the world”, the operational responsibility of safeguarding one of the Goliaths of World Heritage Areas – or, more precisely, 99 per cent of it – rests with the Great Barrier Reef Marine Park Authority (GBRMPA), a Commonwealth government agency established as a statutory authority under the Great Barrier Reef Marine Park Act 1975. The Marine Park stretches more than 2,300 kilometres along Queensland's coast, covering nearly 345,000 square kilometres.  The World Heritage area is slightly larger, spanning 348,000 square kilometres.

That said, the Australian and Queensland governments have an intergovernmental agreement in place that outlines a cooperative approach to protecting the reef's World Heritage values. No small feat, particularly given the fact that UNESCO's “outstanding universal value” tag is bestowed on the basis that a site's disappearance “constitutes a harmful impoverishment of the heritage of all the nations of the world”.

Fantastic four: Spectacular (adjective): Beautiful in a dramatic and eye-catching way. It's a common term adopted by UNESCO when defining exactly how the Great Barrier Reef meets its four natural criteria for outstanding universal value. In summary, the reef ticks all boxes for displaying:

UNESCO also cites the natural beauty and phenomena of the internationally renowned Cod Hole, near Lizard Island; a magical dive site in the Great Barrier Reef's “Wild North” offering an opportunity to swim alongside 110kg potato cod, as curious and accommodating as labradors. Visitors can similarly observe first-hand other phenomena including nesting turtles and migrating whales, with the opportunity to join swim-with-minke-whale encounters. At the top of list, however, is the Mount Everest of reproduction in nature – the coral spawning phenomenon, first discovered by James Cook University researchers back in the early 1980s, which erupts on the Great Barrier Reef after a full moon in late spring or early summer.

The world's most famous naturalist, Sir David Attenborough, ranks coral spawning as one of the greatest of all natural spectacles and was fortunate to witness the nocturnal fireworks during filming of his latest three-part documentary.

Global gong: The Great Barrier Reef Marine Park sets a global benchmark for marine protected area management, with no-take zones covering about 33.5 per cent of the Marine Park or about 115,374 square kilometres. In a big thumbs-up, the World Wildlife Fund earmarked its highest global conservation accolade – a Gift to the Earth award – to the Marine Park's 2004 rezoning, aimed at improving biodiversity conservation.