Starstruck on the Great Barrier Reef 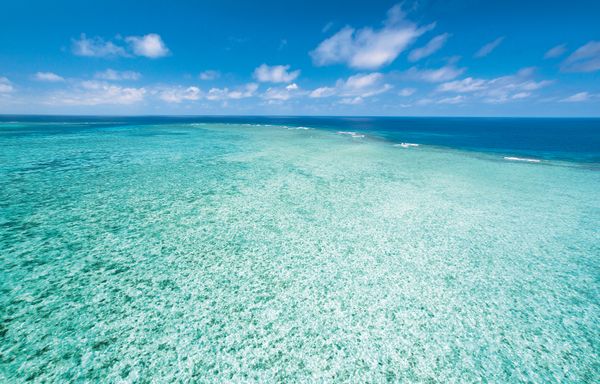 Russell Hore still remembers the day Steven Tyler, of Aerosmith fame, touched down in a helicopter on a floating platform off Agincourt Reef, a popular tourist spot on the outer reaches of the Great Barrier Reef.

Few others gave him a second glance. This quintessential pouting rock god, decked out in signature skin-tight pants, famous for hits like 'I Don't Want to Miss a Thing' from Hollywood blockbuster Armageddon.

“I think he was blown away that not many people took any notice, apart from a few Japanese tourists,” says Russell of the American superstar who visited on a scuba diving holiday in the nineties.

The marine biologist who heads up the environmental division for tour operator, Quicksilver, based in Port Douglas, says it's precisely this laid-back vibe which greets all visitors – celebrities included – that keeps them coming back to a destination where Mother Nature steals the show.

“People never make much of a fuss, which is great because it allows celebrities to be themselves, relax and take things easier,” he says. “Steven Tyler came back with us on the boat and spent the whole afternoon chatting. He'd only just taken up scuba diving and loved the reef.”

Russell has lost count of the celebrities he's introduced to the reef, although still kicks himself for missing Led Zeppelin frontman Robert Plant, who joined a snorkelling daytrip on his day off. Along the way, he's taught American actor/director Ron Howard the rules of cricket on a trip to Low Isles – a snorkelling idyll where actor Matthew McConaughey also enjoyed a spot of frisbee and Rolling Stones legend Mick Jagger hung out on vacation with former wife Jerry Hall and family.

Even former US President Bill Clinton and his wife Hillary chose Quicksilver for a charter with friends to Agincourt Reef in 1997.

“That was probably the biggest coup we've ever pulled off,” says Russell. “We had secret service agents coming out for weeks and swat teams in situ. The Clintons had a great time and Hillary also went to Low Isles.”

During his presidency, Bill Clinton was also rushed out of Port Douglas the day of the September 11, 2001, terror attacks. He was staying at Sheraton Mirage Port Douglas, the resort built by entrepreneur Christopher Skase in the 1980s, forever changing the face of the once sleepy fishing village.

“Clinton was here the night the Twin Towers were hit,” says Steve Hull, joint owner of Iron Bar hotel on lively Macrossan Street. “He came through here and then headed into the Central Hotel when it all went down.”

Steve is no stranger to celebrities. His most memorable encounters occurred during filming of The Thin Red Line (1998), when a who's who of A-list actors descended on the town, including George Clooney, Sean Penn, Woody Harrelson, John Cusack and Jim Caviezel.

“That was an exciting time. We had hundreds of single men in town with disposable income which led to our bar flourishing,” he says. “This is where they all drank and paid $5 for a stubbie and left a $5 tip. Clooney, Harrelson, Penn… all of them.

“No one made too much fuss about them… although one night two bus-loads of girls turned up and all the actors got up and ran, jumped into the next pub and ran off out the back.”

Steve says Pink also pulled up on a motorbike with her boyfriend one afternoon, drank cocktails, watched cane toad racing and played air guitar on a pool cue.

“Apparently in an album she put out, there's a photo of the Iron Bar in the back cover. I've never seen it and I'm a bit old to be stalking bloody pop stars these days. But, like most things in Port Douglas, you don't really worry about it too much.”

“Every week I'd pick up Woody and a few others, including Jim Caviezel, from where they were staying. We didn't have a stadium in town, so went to Mossman for a game with local basketballers. I matched up on Woody and we nearly had a scrap one night because he kept fouling me!”

“Matthew was here three or four days a week,” says Iron Bar manager Alistair Field. “One Saturday night, on his 37th birthday, he shouted the whole bar a drink... it was packed with about 600 people.

“He was talking about how he'd worked hard to get where he was and he was able to have a good time without anyone hassling him. And he wanted to buy everyone a drink, but when he went to pay, his card declined, which was quite funny.

“So, he made a big announcement that his credit card had been refused. Anyway, he had another credit card, which was good. He was just a great bloke and very down-to-earth. He was always riding up and down the street on a bike with no shirt and no shoes.”

“All those guys from The Thin Red Line could sit and have a beer and no-one hassled them and that's a liberating and wonderful thing for them,” says Karen.

“Matthew McConaughey had such a great time in Port Douglas; he pretty much had an opportunity to be Matthew and do what he wanted without a big security contingency.

“Glenn Close also loved the area and was always trying to get a project happening in the Far North. She loved to get on her bicycle and go down to the markets and get what she wanted and no-one hassled her. You know, just 'Gidday Glenn – how are you?' and that was it.”

Karen says it's common for stars to bring their families on location to Queensland, renowned as a safe destination with so much to see and do.

“I spent several months in Brisbane on Unbroken, which was Angelina Jolie's film, and she had her family on set; she's a diligent working mother. She was also up at Airlie Beach to shoot scenes in a couple of private coastal properties.”

A lot of the actors, Karen says, are mad about fishing: “It's the lure of the big fish out there, so when there's down-time they'll go fishing or head up to Mossman Gorge and have a swim without people mobbing them or go to the Daintree or just sit on a beach.”

That said, pretty much every Port Douglas local has a celebrity story. Outside his day job, Russell Hore 'bumped into' David Bowie and his wife Iman as they were leaving a restaurant in Mossman in the nineties called Going Bananas. He's also run into Tom Hanks walking along the beach and spotted Mad Max actor, Steve Bisley, in the supermarket.

Skye Bickford, who, with her husband, runs Shaolin Charters Port Douglas featuring an authentic Chinese junk, once worked in a swimwear boutique in the marina and sold a pair of 'little speedos' to actor Leslie Nielsen, of The Naked Gun. Port Douglas marina is also home to Aussie singer John Farnham's boat, which locals say is often graced by celebrities, including pop princess Kylie Minogue.

Hamilton Island also doubled as a home away from home for former Beatle George Harrison, who built a tropical mansion on a 2.26ha parcel of land in the 1980s, sold after his death in 2001 for a reported $8.5 million. He called the family getaway 'Letsbeavenue' – a pun on the line 'Let's be having you' by British comedian Tommy Cooper.

Set on a private island, Orpheus Island Resort has also welcomed a line-up of stars, including Mickey Rooney and Vivien Leigh in the 1950s; Phil Collins and Sir Elton John in the 1980s; and, most recently Princes Diana's niece, Lady Kitty Spencer. It's a similar story at Lizard Island, reportedly booked out by the Rockefellers for a family wedding, also welcoming Prince Charles, Russell Crowe, Demi Moore, Charlize Theron, Tim Robbins, Susan Sarandon and Tiger Woods.

Back in Port Douglas, Wendy and Hans van der Wolf offer the epitome of luxury and discretion at their Executive Retreats holiday homes, comprising 70 properties from Mission Beach to Cape Tribulation. Among them is, Bali Hai, near Mossman, the location for Australian actress Rebecca Gibney's wedding and, separately, celebrity chef Pete Evans' brother. Dannii Minogue also took up residence during filming of The X Factor (UK) in 2010.

Rumours abound about other famous guests, but Wendy is 'keeping mum'. She and husband, Hans, who in a previous career with Qantas took care of HM The Queen on two occasions, were next door neighbours to flamboyant singer songwriter Peter Allen at Oak Beach – a neighbourhood where singer Natalie Imbruglia and former husband/Silverchair frontman Daniel Johns were married at Thala Beach Lodge.

One thing's for sure, everyone from HM The Queen to the actress who famously played her – Dame Helen Mirren – has fallen under the spell of the Great Barrier Reef, with the latter having first cut her teeth in movies on Dunk Island in 1968, starring in Age of Consent with James Mason.

Now, as then, celebrities (like the rest of us) seek an 'out-of-this-world' escape.

Truth be known, however, with so much else to gawp at, mere human superstars often go unnoticed in nature's biggest playground.