Where the Wild Things are on the Great Barrier Reef 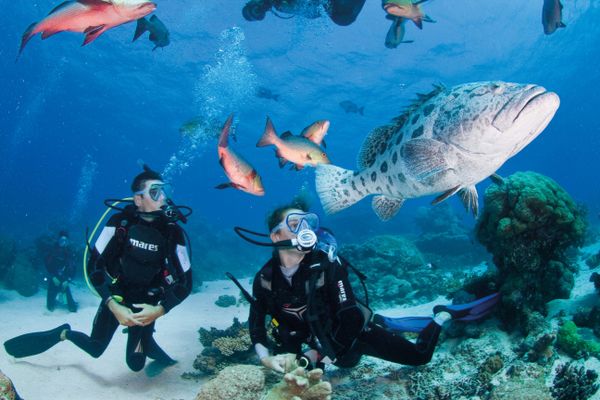 So, you're a bucket list fanatic? Pick a number: five, 10, 101 things or more. The possibilities are endless when it comes to ticking off a to-die-for “To Do” list on the Great Barrier Reef – an icon that tops its own list as the largest World Heritage Area on the planet. Enough said. For the ultimate bucket list of activities, look no further than where the richest concentration of wild things are.

Map your adventure: The Great Barrier Reef promises a whole lot of something for every visitor, whether a drool-factor luxury escape or windswept sailing mecca, über green eco-adventure, lip-biting adrenalin rush or opportunity to dive into the real-world set of *Finding Nemo (*packed with more than 1600 fish species). The only conundrum is where to start. First up, it's important to mentally step through the reef's five distinct experience precincts: the Wild North – Cape York and Torres Strait (marine wilderness expeditions); Cairns and Port Douglas (adventure and adrenaline); Townsville North Queensland  (history and learning); Whitsundays and Mackay (stylish island resorts and sailing); and Southern Great Barrier Reef (uncrowded getaway). Then, do like Men In Black and zap any notion of “traveller type” and pack for every adventure. You won't regret it.

Great expectations: You know you're onto a great thing when Sir David Attenborough says it's “the most magical thing you ever saw in your life” and the United Nations Educational, Scientific and Cultural Organisation trips over its superlatives when defining the reef's outstanding universal value, topping all four natural criteria to make the World Heritage List. The traveller's bible, Lonely Planet, meanwhile, in its inaugural Ultimate Travelist (published August 2015) ranks the Great Barrier Reef at No. 2 in the world's must-see 500 destinations, behind Cambodia's Temples of Angkor, but ahead of Peru's Machu Picchu, The Great Wall of China and India's Taj Majal. While these are all man-made wonders, the Great Barrier Reef, as the largest structure ever built by living things (and the only one visible from outer space), is the work of billions of tiny organisms, known as coral polyps, and has evolved over millennia.

Out on the Southern Great Barrier Reef, Lady Elliot Island Eco Resort is as close as you'll get to a carbon-neutral model, offering behind-the-scenes tours of its “green” infrastructure. The resort generates its own power, desalinates seawater for drinking, maintains a waste water treatment plant, recycles and stopped selling bottled drinking water in 2012. It also developed the first dedicated Climate Change Trail and Tour.

Bucket List #2 – Big is beautiful: From North to South, the wild things are hard to miss when they're as big as whales or take the form of inquisitive potato cod, weighing up to 110kg – both found in the Wild North (don't miss the Cod Hole, near Lizard Island, or a once-in-a-lifetime opportunity to swim with dwarf minke whales, which visit between June and July each year, representing the world's only predictable aggregation). Down south, Lady Elliot Island stakes its claim as “Manta Heaven”. Indeed, PADI lists it in the Top 5 locations on the planet (alongside Hawaii, Galapagos Islands and the Maldives) to encounter manta rays; gentle giants with wing spans up to seven metres and the largest brain to body size ratio of any living fish.

Renowned as being interactive with divers and snorkelers, mantas also perform a fascinating mating ritual, known as the “courtship train” – a bit like an underwater conga line, when males follow and mirror a female's every move… sometimes for days. Other big personalities on the reef, taking their place in the 'Great Eight', include Nemo-like clown fish, 120-year-old giant clams, maori wrasse, turtles and, of course, sharks. Most recently, the largest fish in the sea has cruised in. At the start of 2016, GBRMPA put out a call for sightings of groups of whale sharks, with six reported in the first weeks of January (following the first ever sighting of a whale shark aggregation on the reef in 2015).

Bucket List #3 – Into the deep: SCUBA diving is the best way to explore the reef's underwater wonderland, representing the greatest example of biodiversity on the planet. And, as the father of scuba diving, Jacques Cousteau, proclaimed: “The best way to observe a fish, is to become a fish.” A big fan of the Great Barrier Reef, Cousteau named Heron Bommie (one of 16 dive sites within 15 minutes of Heron Island in the south) among the world's top 10 dive locations, with SS Yongala wreck (off Ayr, near Townsville) also consistently rated in the top 10.

For keen divers, a live-aboard boat is the best option, facilitating trips to outer reefs and, for the more experienced, plummeting Coral Sea wall dives, including the opportunity to witness a live shark feed on Osprey Reef (a beacon for many pelagic species including barracuda, dogtooth tuna and mackerel, and a stunning shiver of sharks, from white-tips to Grey Whalers, Hammerheads and Oceanic Silver tips). SCUBA's not your thing? Try a Seawalker tour (helmet dive) off Green Island. The Great Barrier Reef, as one of the world's most accessible reefs, is also a snorkelling paradise. So, get out there and discover your inner Mermaid by diving and snorkelling every precinct on the reef.

Bucket List #4 – Love actually: coral spawning, aka the Mount Everest of reproduction in nature, was first discovered by James Cook University researchers back in the early 1980s. One thing's for sure: it takes the cake on Sir David Attenborough's bucket list, erupting each year on the reef after a full moon in late spring or early summer. Cairns-based dive operators Tusa Dive and Quicksilver's Silverswift offer special night diving and snorkel tours around the event. In the mood for love? Hollywood's Kate Hudson reckons Lizard Island Resort is “the most romantic place in the world”. For something different, hop aboard Cruise Whitsundays' Reefsleep adventure on a floating pontoon on Hardy Reef (maximum of nine guests) or pop the question on a scenic flight over Heart Reef.

Bucket List #5 – Land ahoy: Coral reefs may have made the Great Barrier Reef famous, but only comprise seven per cent of the Marine Park and World Heritage Area, also punctuated by 600 continental islands, 300 coral cays and about 150 inshore mangrove islands. No bucket list is complete without a turtle encounter, with the reef home to six of the world's seven species of marine turtles. While Raine Island, the largest green turtle rookery on the planet (on the reef's remote northern tip), is not accessible to the public, other popular mating and nesting sites can be found on Lady Elliot Island, Lady Musgrave Island, Heron Island, Green Island (the only one with a rainforest), Fitzroy Island and Bundaberg's Mon Repos Beach (don't miss a Queensland Parks and Wildlife Service ranger-guided turtle encounter at Mon Repos Turtle Centre). November to March is turtle nesting and hatchling season.

GBRMPA offers important tips on navigating turtle traffic as hatchlings make their against-all-odds dash to the ocean. Twitchers are also in for a treat on the reef; home to 215 species of birds, including 22 nesting species of sea birds and 32 species of shorebirds. Accessible from Port Douglas, Low Isles is made up of two islands; Woody Island and Low Isle.

Offering the best of both worlds, Woody Island is uninhabited apart from a large bird population, while Low Isle resembles a picture perfect tropical island, hugged by coral reef that you can snorkel from the beach. Lady Elliot Island, Lady Musgrave Island and Heron Island (all being true coral cays or sandy islands atop the reef) offer a similar prêt-à-snorkel adventure.

Still have energy to spare? For the adrenaline junkies, there's reef skydiving from 14,000 feet; helicopter fishing expeditions; ocean kayaking; yacht racing; and Seabobbing… to name just a few. Golf aficionados: head to Dent Island, Australia's only 18-hole championship golf course that occupies its own island. If camping's your thing, pitching a tent on the Great Barrier Reef is a unique way to get back to nature. You can camp on several islands on the reef (most are national parks and require a permit).

Alongside luxury resorts of the ilk of One & Only Hayman Island or Qualia on Hamilton Island (where pop superstar Taylor Swift chillaxed), there are close to a dozen idyllic camping sites in the Whitsundays. Other popular spots include the uninhabited Lady Musgrave Island, perhaps best known for its massive, protected lagoon (ideal for families and learner divers), Lizard Island, Orpheus Island and Dunk Island. For the ultimate cashed-up Robinson Crusoe escape, rent Haggerstone Island.

And if you're still looking for a million and one things to do, the Great Barrier Reef hosts an annual round-up of world-class events, including the Captain Cook 1770 Festival, Great Whitehaven Beach Run, Great Barrier Reef Swim (Heron Island), Airlie Beach (yacht) Race Week, Great Barrier Reef Marathon, Cairns Airport Adventure Festival, and Mackay Airport Beach Horse Racing Festival (only the third event of its kind on the planet).

Did you know? In 2014-15, 64 per cent of all visitors to the Great Barrier Reef Marine Park were carried by 'high standard' tourism operators accredited under Ecotourism Australia's Eco Certification Program.