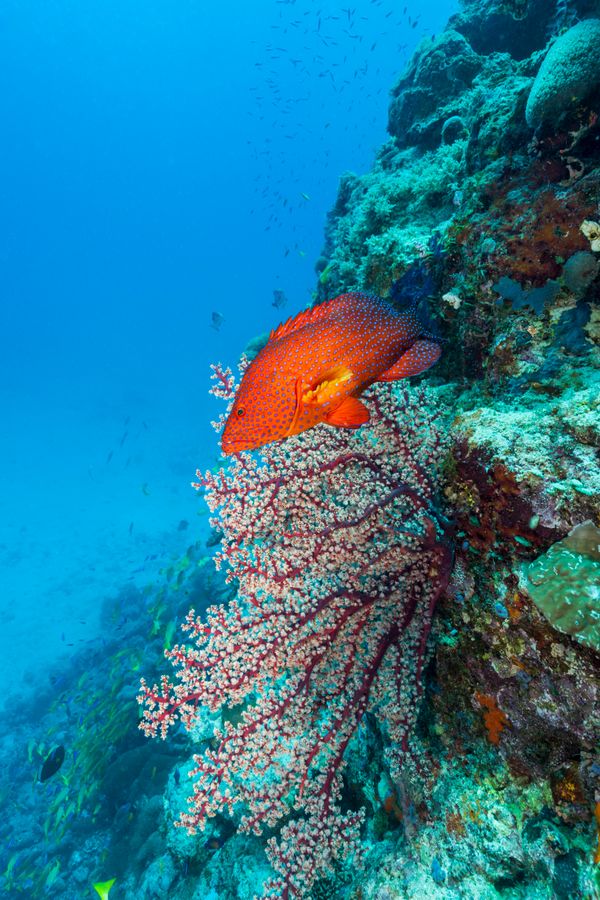 Stretching for 2,300km and covering around 350,000 square kilometres, this World Heritage-listed site is world's largest coral reef and is made up of more than 2,900 individual reefs, and 1050 islands and coral cays scattered along the edge of the continental shelf.

Take the plunge and discover some of our top diving spots moving from the northern-most tip to the mega fauna in the south:

First made famous by internationally-recognised underwater photographers Ron and Valerie Taylor, the Cod Hole is a haven for friendly, giant potato cod (weighing between six and 150kg) which have been hand fed for the past 20 years and giant maori wrasse. Drop to the sandy floor area between the bommies and enjoy the spectacle of tropical fish feeding above. The site off Lizard Island is accessed via a list of liveaboard dive operators leaving from Cairns or Port Douglas. http://www.youtube.com/watch?v=V0MZj89mxRY

2. Pixie's Pinnable and the Ribbon Reefs: The Wild North

The Ribbon (also called barrier) Reefs only occur in the northern part of the Great Barrier Reef extending from Cooktown to the eastern Torres Strait (covering a distance of 670km). They form along the edge of the continental shelf and, in some places, the outer edge is so suitable for coral growth, that the reefs grow high and form narrow walls. One of the sites often visited is Pixie's Pinnacle which rises from 40 metres to the surface. During June and July, dwarf minke whales are spotted on this remote section of reef, which makes it extra special for diving.

Agincourt Reef, off Port Douglas on the Great Barrier Reef, is a series of smaller reefs with around 20 different dive sites. Clear water provides the best underwater visibility and The Channels offer interesting swim-throughs and caves, whilst The Gardens are renowned for their exceptional abundance of brightly-coloured reef fish. Blue Wonder is a breathtaking wall dive to beyond 40 metres while Nursery Bommie is a spectacular pinnacle where pelagic fish gather to feed. http://www.queensland.com/attraction/agincourt-reef-56b2608eaeeeaaf773cf3615

Osprey Reef is one of the most spectacular dive sites in the world, located in the Coral Sea off Cairns and accessed via a liveaboard. The North Horn site on the reef is a remote sea mount rising 1000 metres from the ocean floor offering spectacular wall drop-offs, amazing visibility and a popular shark-feeding location. The northern most point attracts reef fish and pelagic species including barracuda, dogtooth tuna and mackerel. Whitetip sharks and grey whalers cruise off the wall while hammerheads and oceanic silvertips swim in from deep water to check out the action.

Off the coast of Townsville, you'll find Wheeler Reef - a platform reef perched close to the continental shelf drop off. Perfectly circular in shape, this magnificent example of marine biodiversity offers spectacular formations of plate, branching and soft corals in brilliant colours teaming with tropical life. Rated as one of the best night dives on the reef, moray eels, epaulette and whitetip sharks, bull rays, as well as a myriad of shrimps and other crustaceans all await to be discovered by divers who like the dark! Note: this reef is currently regenerating after Cyclone Yasi and Lodestone Reef is a very worthy alternative with brightly coloured coral and plenty of marine life. http://www.queensland.com/attraction/wheeler-reef-dive-site

More than one hundred years after sinking off the coast of Townsville, the SS Yongala is now one of the world's top wreck dives and one of Australia's best dive sites thanks to the sheer proliferation of marine life in, on and around the 100-metre-long wreck. Here, giant Queensland gropers hang beneath the stern while schools of trevally and cobia congregate around the depths of the wreck.

Bait Reef is one of the most pristine diving locations on the outer Great Barrier Reef. With a depth of between four to 18 metres and visibility of 10 to 20 metres, the well-protected Gary's Lagoon is an ideal site for snorkellers and beginner divers. Coral gardens, underwater canyons, swim throughs and dramatic walls provide a range of interesting underwater terrain to explore. This site is also easily accessible from either Airlie Beach (mainland) or Hamilton Island.

The nearest cluster of reefs to the Whitsunday Islands, Hardy Reef is a 42km square 'patch reef' offering a shallow lagoon separated from surrounding reefs by a deep channel of water up to 60 metres deep, ideal for wall dives. Here, divers can expect to see a large variety of soft and hard corals and many species of 'people friendly' fish, including George the Giant Queensland Grouper, a curious three metre resident since the 1990s. The Reefworld pontoon is located here, with guided diving, snorkelling and overnight stays available. http://www.queensland.com/attraction/hardy-reef-56b260842cbcbe7073ada9b7

While it's too far south to be considered the Great Barrier Reef, we couldn't leave this one out. Queensland's newest shipwreck – Ex HMAS Brisbane - located off Mooloolaba on the Sunshine Coast, is an ex-royal Australian Navy destroyer that served in the Vietnam and Gulf Wars before being sunk in July 2005. Kept in its original condition (where possible), the vessel is now sitting upright on the ocean floor, 28 metres below sea level. Only certified divers can access the site through a licensed dive tour operator. http://www.hmasbrisbane.com.au/

Easily accessed from Gladstone, Heron Island is a true coral cay where you can step off the island to fantastic coral gardens and pinnacles, just minutes from the beach. The diving is so good that Jacques Cousteau listed the Heron Bommie as one of his top 10 favourite dive sites in the world. Both Heron and Lady Musgrave Islands offer world-class diving and are just two of the places in the Southern Great Barrier Reef where you can spot the 'Great Eight' marine creatures. www.heronisland.com; http://www.ladymusgraveexperience.com.au/

The Southern Great Barrier Reef is known for its mega fauna and Lady Elliot Island doesn't disappoint. Known as the home of the manta rays, this coral cay – situated within a Green Zone - attracts divers from around the world for its diversity, quantity and size of the marine animals.  Visibility is over 20 metres for much of the year and encounters with green, hawksbill and loggerheads are a daily occurrence.  PADI recently named Lady Elliot as one of the Top Five locations in the world to dive with Manta Rays.  http://www.ladyelliot.com.au/dive

About the Great Barrier Reef:

The Great Barrier Reef is the world's biggest coral reef system and the largest living thing on Earth, stretching 2,300 kilometres from the tip of the Cape York Peninsula to Bundaberg. It is Queensland's most valuable tourism asset with around two million visitors taking trips to the Reef each year. As a custodian of the Reef, Queensland's tourism industry is committed to responsible practices, as well as actively participating in programs to protect Reef health and build resilience. Anyone who visits the Reef with a commercial operator contributes an Environmental Management Charge of $6.50 per day to the Great Barrier Reef Marine Park Authority, which is vital in supporting day-to-day management of the marine park.  In June 2017, Deloitte Access Economics release a report that valued the Great Barrier Reef at A$56billion, with an economic contribution of A$6.4billion per year. Read the full report: http://bit.ly/2A5p6I2