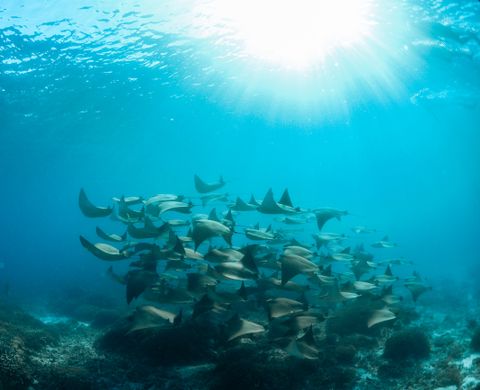 Earlier this month, Lady Elliot Island Master Reef Guide Jacinta Shackleton was snorkelling off Lady Elliot Island, when she spotted a large school of cownose rays, rarely seen in the waters off this tiny coral cay on the Southern Great Barrier Reef.

Ms Shackleton said this surprising encounter took her breath away as she never expected to see such a large fever (the term used to describe this beautiful swimming formation) of this rarely encountered species.

“It looked like they were dancing in sync across the reef,” Ms Shackleton said.

“I've been conducting research on the reef off Lady Elliot Island for three years and I've never seen a cownose ray before.”

She estimates there were between 80 – 110 of the magnificent marine creatures gliding through the shallows, just off the beach.

The cownose ray is aptly named after the unique shape of their head, which from above, looks like a cow's nose.

“It was stunning to turn around and see such a large group of these distinctive rays swimming in only five metres of water. The shape of their heads was just so strange to see, two lobes just like a cow's nose,” Ms Shackleton said.

“It is one of my 'magic moments' on the reef where I'm just blown away by what I'm seeing and completely absorbed in that moment.”

Dr Andrew Chin from the Centre for Sustainable Tropical Fisheries and Aquaculture at James Cook University said not much is known about cownose rays in Australia.

“Because they are rarely sighted, the cownose ray is not well documented across the Great Barrier Reef or in Australian waters, so it's fantastic to have that record from Ms Shackleton so we can try and learn more about them and their movements,” Dr Chin said.

“The species is listed as Data Deficient by the IUCN (International Union for Conservation of Nature) Red List, so we don't really know how they're faring from a conservation or threat point of view. We think they tend to travel in these large groups and that their appearances could be seasonal.

“I'd encourage anyone who comes across the distinctive cownose ray to report the sighting so that we can gather as much information as possible to better understand the species.”

Sightings of the cownose ray can be recorded via the Great Barrier Reef Marine Park Authority's Eye on the Reef App.

This is Ms Shackleton's second extraordinary ray sighting off Lady Elliot Island in twelve months, following her encounter with an ornate eagle ray in March last year. The ornate eagle ray is so rare there had been little more than 50 sightings of the species worldwide at the time.

Lady Elliot Island is home to an abundance of rare and vibrant marine life, making it one of the most sought-after destinations for once in a lifetime Great Barrier Reef experiences. Ocean-lovers are encouraged to start planning their next underwater adventure to this World Heritage wonderland at queensland.com/greatbarrierreef.

Video footage and still imagery of the cownose ray off Lady Elliot Island can be accessed at the Dropbox link below. Mandatory credit: @jacintashackleton: https://www.dropbox.com/sh/ijjgbybvtiil76l/AABqOwDFD6PsNAxR2L4iC36ya?dl=0

Editor's note: For the latest information on COVID-19 travel restrictions and advice in Queensland, click here.