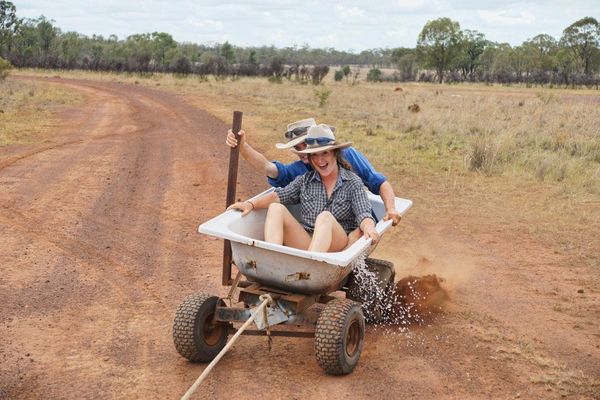 Queensland's outback is big and colourful. It brims with some of the world's funniest characters, biggest adventures and outlandish events like the outback dunny races in Winton, goat races in Barcaldine and a Melon Festival that has contestants ski with watermelons attached to their feet, in Chinchilla.

But there's more to the outback than quirky characters and colourful events. Did you know that parts of Queensland's outback used to be an inland sea? Dig beneath the surface and discover a magical adventure right here on your doorstep.

The journey from the coastal town of Yeppoon into the heartland of Queensland travels along the Tropic of Capricorn and straight into Gondwana to a time when Australia was part of a colossal southern continent crawling with extraordinary creatures.

First stop is Rockhampton's 'Journey of Discovery', a fascinating geo-tour that stumbles upon marine fossils dating back millions of years, rare fauna and flora and a geological dig site located in the above-ground limestone caves.  Travellers can literally look back in time to understand how these magnificent caves were formed and can see some of the native plant and animal life that thrived around Rockhampton millions of years ago. The tour comes after Palaeontologists from the Queensland Museum discovered the remains of mega fauna including the jaw bone of a Diprotodon, a giant carnivorous wombat the size of a four-wheel drive. Imagine coming across that!

Still on the digging theme, head to Anakie, Rubyvale, Sapphire and the Willows and check out the largest sapphire fields in the Southern Hemisphere. Like many of the wonders along the Tropic of Capricorn, the gem fields are a product of incredible time and drastic changes in climate and environment. Grab your pick and pan and get going. Locals say that after this year's rains, the blue and green sparklers are so much easier to spot.

The best place to shed a little dust after your dig is Longreach, home to the 3000 residents, the famous Australian Stockman's Hall of Fame and lookout of the infamous Australian bushranger and cattle thief, Captain Starlight.

Here, you can also tickle your historical tonsils with a gallop on Australia's last operating Cobb & Co Stage Coach – drawn by four massive black horses – or a walk into the bowels of two full scale air planes at the Qantas Founders museum. One of these has a history of magical moments, having brought a young Queen Elizabeth to Australia in 1959, The Beatles to Brisbane in 1964 and Michael Jackson and Madonna around the globe.

Your next geo-stop, near Winton is Lark Quarry Dinosaur Trackways where the only recorded dinosaur stampede on earth happened! A record of those few terrifying minutes is cast in more than 3300 fossilised footprints. The footprints tell us about a cooler, wetter world, when dinosaurs roamed the earth.

If it's dinosaurs you are after then make sure you pop into Winton and the 'Australian Age of Dinosaurs'.

Located in a big tin shed, no different from the thousands of Titan sheds around the country, the Age of Dinosaurs is full of bones.

No ordinary bones. These are the priceless reminders that giant dinosaurs freely roamed Queensland 95 million years ago when the land was littered with cycads and redwoods more telling of a temperate forest.

The Age of Dinosaurs is not just a museum. It's home to the world's largest collection of Australian dinosaur fossils.

It's also the only place in the world where you can get your hands-on dinosaurs by either touring the production shed like we are today, volunteering to prepare dinosaurs by scaling micro bits of soil from the bones, or taking part in a real dinosaur dig each August at a cost of a few thousand dollars.

A few hours north, the town of Hughenden is also hailed as a famous dinosaur dig and The Flinders Discovery Centre houses Hughie, the 7 metre muttaburrasaurus replica of the first entire dino skeleton found in Australia.

Further west have yourself a Min Min Encounter. Are these eerie lights a result of geological forces or something more sinister?

Digging the tropics has never been easier and the quickest way to start your outback adventure is to fly to one of central Queensland's two major airports: Rockhampton and Longreach. There are frequent daily connections from most major eastern cities, including Brisbane, Sydney and Melbourne.

If you decide to take the road less travelled, plan your journey on one of several themed highways.

From Brisbane: travel the inland route along Great Inland Way to Longreach or take the Pacific Coast Touring Route to Rockhampton.

From Sydney: follow Australia's Country Way, which takes you along the New England Highway to Rockhampton, or journey along the Great Inland Way, which follows the Great Dividing Range, travel the coast road on Pacific Coast Touring Route.

From Melbourne: retrace the steps of the famous explorers along the Newell/Leichhardt Highway which takes you to Rockhampton or journey further inland along the Matilda Highway to Longreach