Calling All Cowboys and Cockies... Pack Up The Patrol And Head West For An Outback 'Eventure' 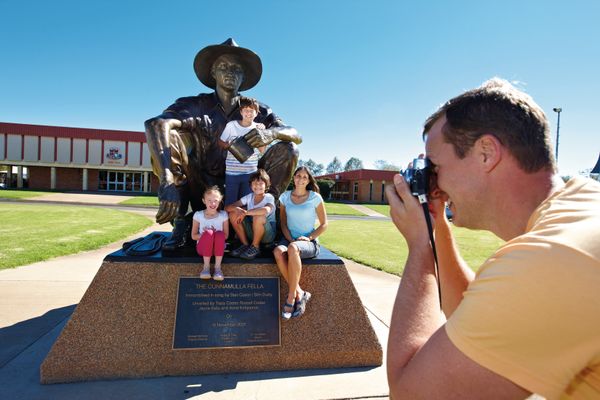 Fuel up the 4WD and get ready, because Queensland's outback is about to explode into a dirt busting riot of colour, cowboys, horse races and oddly enough, Operas, as the state gears up for a spring calendar of events designed to put the best of our country folk, and the beasts behind them, on show.

So, if you're about to head off on that month-long nomadic adventure, why not tie in a little 'eventure' and meet the friendliest folk on the planet from the quaintest towns in the country. Or if you have week spare, pop west for some land-locked action.

Curry Merry Muster Festival, Cloncurry (August)
They call it “the Curry”, and there's no better place to get hot and spicy than Cloncurry for the Curry Merry Muster Festival, a rodeo known for its heart-racing man Vs beast action. Located a short detour east of the Isa, this tiny town features a street parade, local workshops, markets, live entertainment and loads of rodeo action with both bull and bronc riding.

The Drovers Camp Festival, Camooweal (August)
Three decades after the final drover's run mustered cattle through town, a group of former stockmen, ranchers and cattle herders – now in their 70s and 80s - return to Camooweal to rekindle the tales of yesteryear. Anyone can join in and yarn with a “droving darling”, watch the bull riding, or a tour of a massive big shed filled with memorabilia of the droving history of Northern Australia.

Birdsville Races (August/September)
It's not quite the race that stops the nation, but it is the race that fills a town. One of the richest race meetings in regional Australia, the Birdsville Races attracts more than 6000 spectators, owners, trainers and jockeys – most of them pulling up a swag, cracking open a tent, or sleeping under the stars to get a dusty taste of the race track action.

Enroute to Birdsville, stop in at Longreach for the annual Yellowbelly Classic (August 26 – 28) or take box office seat in the main street of Windorah (the only street?) for the International Yabby Races (August 31) where trainers secretly feed the odds-on favourites a fine diet of carrot and corn.

Bedourie Ute and Travellers Muster (September)
Attention all revheads! If you've busted the bank at the Birdsville Races, then head down to Bedourie for a meeting of diesel and dust.  The Bedourie Outback Ute and Traveller's Muster is THE place to be if you own utes, like utes, race utes, or just want a ute. If the peddle to the metal in your own mean machine, there's a huge cachet of prizes and dollars up for grabs!

Opera in the Outback (October)
Three hundred and fifty clicks south-west of Cairns, the outback hits its highest note as the stars of the Operatic circles travel north for a polished performance in the bush. Held in Undara under the spotlight of a million night stars, Opera in the Outback includes a theatrical performance on Thursday and two nights of full blown Opera.

Jundah Annual Races and Oktoberfest (October)
If the clink of a beer stein and the image of an honest Aussie farmer in lederhosen appeals to your sense of humour, then turn the GPS to Jundah for the world's most remote Oktoberfest.

Held outside the town's sole pub, the Jundah Oktoberfest began in 2010 as a salute to the first German beer fest 200 years ago. While there's little link back to the motherland – apart from a motley crew of Deutscher backpackers - there will be traditional costumes, a romp-stomping folk band and the odd pork sausage or two.