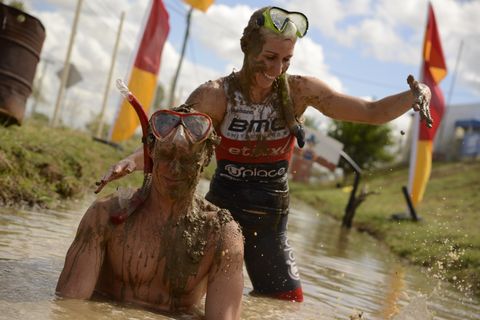 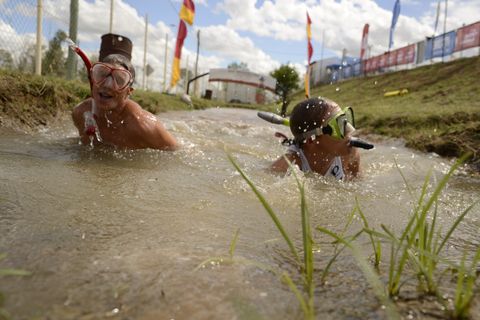 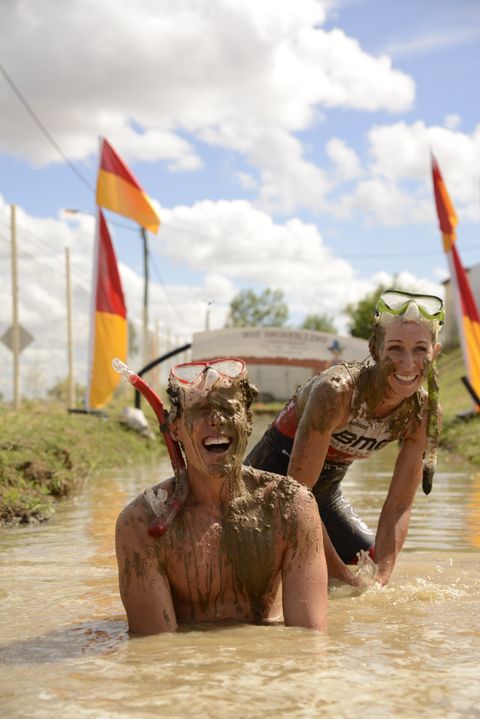 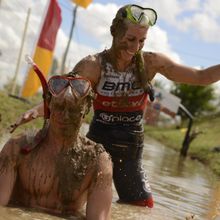 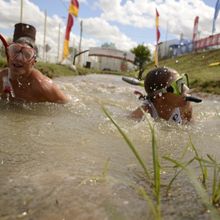 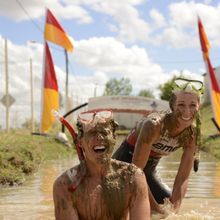 Facing off in the ultimate battle of dirty tactics, the pair pulled out all stops in Australia's only annual bog snorkelling championship at Julia Creek's famed Dirt n Dust Festival (15-17 April 2016). Liz emerged the winner in the 30-metre race by 'a nose'.

Proudly flying the iconic red and yellow flags and something of a veteran in the trench, Reidy said: “It's a bit like warm chocolate pudding that doesn't smell that good… but having been here before [in 2014], I thought I had the upper hand over Blatchie.

“It's definitely the kind of competition you don't play fair and is actually pretty big overseas, particularly in the UK. But I think I'll stick to where it's nice and warm.

“The best thing about travelling to places like Julia Creek is you get to experience the real Australia, real characters and larrikin charm. I'm happier than a pig in mud!”

For Liz, the bog snorkelling challenge doubled as an opportunity to 'get psyched-up' ahead of her debut in the Dirt n Dust Festival's gruelling triathlon on Saturday (16 April). Now in its 22nd year, the event – complete with mud, dust, heat and flies – is renowned as one of Australia's toughest, drawing the likes of Olympians Brad Bevan, Loretta Harrop, Courtney Atkinson and Emma Jackson.

“It's one of the biggest wins of my career – something I'll be proud of forever,” said Liz. “Throwing yourself into a muddy trench with someone like Reidy is also a great way to shake off any pre-race nerves. Everyone should try it!”

Reidy is also lining up in the triathlon. While in 2014 he was disqualified from the festival's crowd-pleaser – Australia's Best Butt competition – for being 'too cheeky', he found his stride in the triathlon; placed eighth with a time of 01:12:32.

“I've been training hard, so I reckon I'll give Blatchie a good run for her money,” he said. “I'm also at a distinct advantage having done the triathlon course once before and experienced some of its unique challenges like dirt, dust and flies. Lots of flies. I reckon I swallowed a few last time.”

British-born and Australian-raised, Liz grew up competing in Surf Life Saving competitions on Perth beaches before changing gears to the triathlon circuit. She came third at the 2013 and 2015 IRONMAN World Championship and has been crowned IRONMAN Cairns' Queen three years running.

Splitting her time between the Gold Coast and Boulder, Colorado, in the US, Liz is also capitalising on Queensland taking the podium as Australia's Endurance State after Melbourne passed the baton to Tropical North Queensland to host the annual IRONMAN Asia Pacific Championship through to 2018 (as part of the Cairns Airport Adventure Festival in June), while the Sunshine Coast hosts the 2016 IRONMAN 70.3 World Championship in September.

“Nothing comes close to the buzz of competing in some of the world's most uniquely beautiful places, from the Outback to the Great Barrier Reef and World Heritage listed rainforest,” said Liz. “To be honest, sometimes it's hard not to be distracted by what's around you.”

For more of Australia's best live events in the best destinations, check out Tourism and Events Queensland's It's Live! In Queensland calendar, showcasing more than 116 events across the state: www.queensland.com/events.

Did you know? Bog snorkelling has a cult following in Ireland, parts of northern Europe and Wales (home to the world championships and listed among Lonely Planet's Top 50 'must-dos' in 2014). Julia Creek Dirt n Dust Festival staked its claim on the global bog snorkelling calendar in 2008, with the town's first two championships won by former world champion, Julia Galvin, who travelled all the way from the peat bogs of County Kerry, Ireland.

Publicist – It's Live! In Queensland