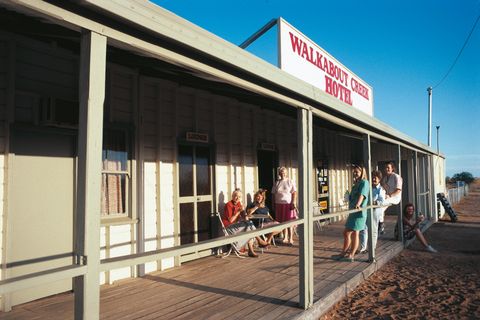 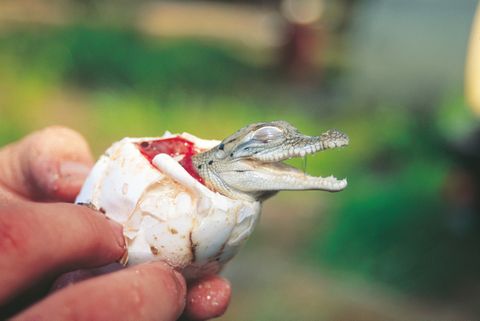 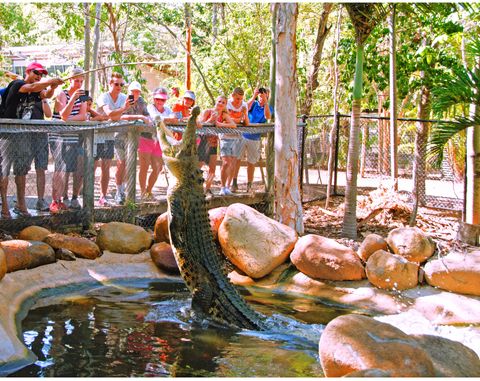 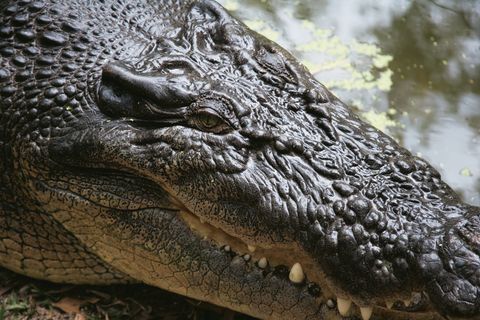 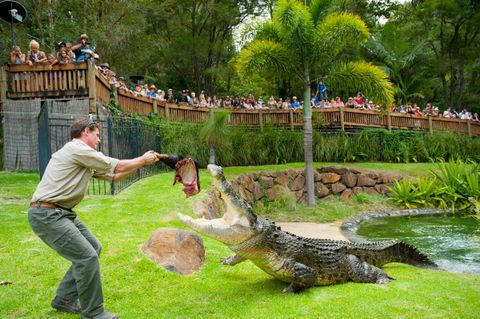 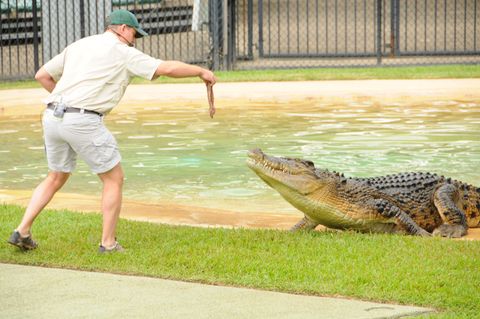 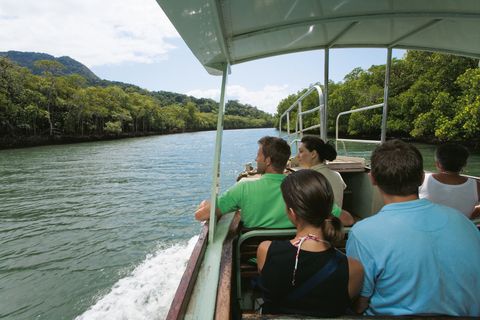 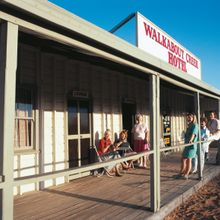 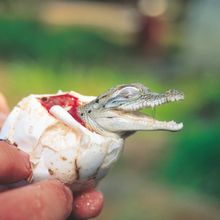 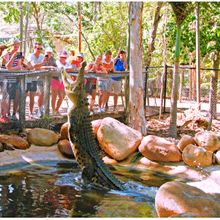 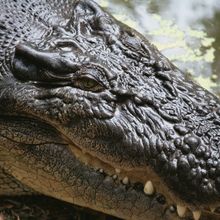 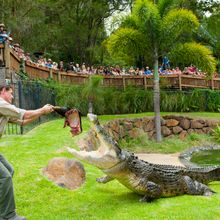 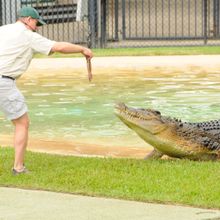 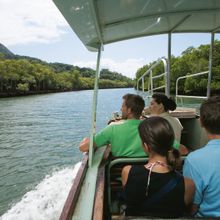 "And then bang, this giant crocodile came up, turned him over, bit half his leg off and dragged him under. I mean any normal man would have turned up his toes and died. But, not our Mick."  Mick's mate, Walter Reilly.

Sunday April 24 marks the 30th anniversary of the hit movie Crocodile Dundee and to celebrate the town of McKinlay – home of the scene-stealing Walkabout Creek Hotel where Mick made his debut –will throw a street party fit for the man himself.

There may not be any croc wrestling, but the "Dundee-fest" will see a reptile show and bush survival skills shut down the main street (population 16) and "that's not a knife, this is a knife” jokes encouraged. Even the publican's daughter, Kelly Wust, has promised to get into the spirit, by roping off a corner of the pub and setting up a mobile hairdressing salon promoting the “Dundee Do”.

For those who can't make it like Mick and get to McKinlay, Queensland has plenty of other ways to smile at a crocodile. Here's seven of our best:

Bindi Irwin once said, "Give me a 15 foot crocodile any day over a bee" and by Crikey! she meant it.

Home of the late crocodile hunter Steve Irwin, it stands to reason that the Crocoseum at Australia Zoo is our top spot to spot a croc. (Say that twice!)

Every day, the team choreographs a jam-packed, jaw-snapping show with power swimming and high-octane leaping, followed by curly crocodile questions like how long can a crocodile can spend underwater at one time. Ps – it's seven hours for those playing at home!

More than just a "Reptile V Chicken", visitors  learn some of the lesser known facts about this apex creature, all tied into a strong conservation message.  www.australiazoo.com.au

Some rescue cats, some rescue dogs but others rescue crocs, giving new meaning to the phrase "adopt don't shop."

That's how it all started for John and Lillian Lever in 1981, when they saved a few rogue crocodiles destined for a bullet in central Queensland.  Fast forward 35 years, and Rockhampton's Koorana Crock Farm is an example of captive breeding success, with space for up to 3000 crocodiles.

By day or by night, visitors can take a guided tour of the farm, watch crocs feed, view active nest sites and get hands-on with baby crocodiles. Being the first commercial crocodile farm in Queensland, there's also a gift shop stocking handbags, hats and belts, all fashionably made from crocodile.   www.koorana.com.au

With a name like Bruce Belcher, you know the man is going to be a real character, and boy, this crocodile-cowboy doesn't disappoint.

Bruce has got eyes like a hawk when it comes to spotting a croc – above, on or below the water's surface. Such precision comes from years of training; he's been in the croc-spotting game for 28 years and has 40,000 tours under his belt, leading guests through the world-heritage listed Wet Tropics of Queensland.

Seemingly for Bruce, the mangrove banks around the Daintree River have the same effect on crocs as Venice Beach has on humans, as they jostle to find a sweet spot on the banks to bake before a cooling dip.  www.daintreerivercruises.com.au

They build things bigger and better in Queensland's tropics and Cassius the 112 year old crocodile is no exception.

You'll find him pottering around his retirement home at Marineland Crocodile Park on Green Island, off the Coast of Cairns, eating a diet of chicken, fish and pork. #paleogoals.  This leathery fellow holds the record as the largest croc in captivity measuring from teeth to tail 5.48m and tipping 1300kg on the scales.

Cassius has a lot to thank his captor and caretaker George Craig for – they've been together for 30 years and have a special bond, which you'll see at the daily feeding show.

Despite being an old bloke, Cassius can still propel his massive frame out of the water once he gets a whiff of a bird  on the end of a fishing pole.  www.greenislandcrocs.com.au

If you thought the Whitsundays was all luxury islands and yachting, think again. Crocodiles have called this paradise home for the past 200 million years.  At least in the estuarine regions.

Join Whitsundays Safari to spot Proserpine's resident crocodiles in the wild estuaries and and wetlands that skirt the coastline near the Proserpine River. You won't need binoculars. These crocs are easy to spot basking on the banks of the river, maintaining a comfortable body temperature.  www.crocodilesafari.com.au

If ever you wanted to meet the Australian coat of arms (hint: emus and kangaroos), Billabong Sanctuary in Townsville is how you do it.

Go for the interactive wildlife shows with the cute and cuddly native animals, but stay for the headlining act, the "Rock the Croc" experience to get a waiter's view down the jaws and into the gullet of a 400kg crocodile as it propels half its body out of the water at the sight of a chicken drumstick.  That jaw is so powerful it could crush a whole water buffalo in one chomp.  www.billabongsanctuary.com.au

Boss Hog by name, Boss Hog by nature. So, it goes without saying, this big guy's a must-see attraction when you visit Currumbin Wildlife Sanctuary on the Gold Coast.

He's big (almost five meters), he's heavy (800kg) and he takes no prisoners especially when it comes to food.  Once a wild croc with an appetite for the finer things in life, Boss Hog, was caught in the wild in the 1980s after killing a Brahman stud bull worth more than $10,000.

His plea bargain was to live out his days at Currumbin Wildlife Sanctuary with fresh meals delivered to his door.  Dinner's aren't as big these days, but there's no problem with his appetite. At 12:30 every day, one lucky visitor gets to pole feed chicken to this mighty eating machine.. www.cws.org.au

This Press Release is supplied courtesy of Tourism and Events Queensland. For more information, please go to www.queensland.com or www.blog.queensland.com. For images, please visit teq.lookat.me.com.au. And last, but not least, if you use this material, it would be awesome if you could email us, let us know and, where possible, we'd be happy to amplify the content through our online channels.