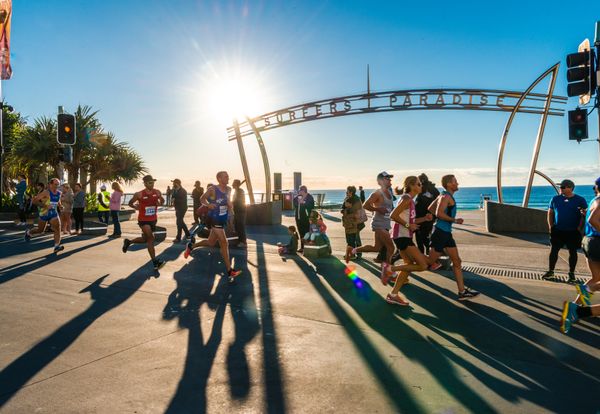 TESTING. TESTING. 1.2.3. It's not just about the end game here, the Gold Coast is gearing up for a jam-packed year of test events in the lead up to the GC2018 Commonwealth Games and for the sports nuts in the bleachers (and on the road), check out some of our box office action.

The world's best triathletes will descend on the Gold Coast for a leg of the ITU World Triathlon Series. The sun, surf and sand are the perfect foundations for some exhilarating racing. Age Group triathletes can experience the ITU course for themselves with the Jewel Gold Coast Triathlon – Luke Harrop Memorial on the following day. Be part of the action as the elites begin their campaign toward the 2018 ITU World Championship and Commonwealth Games. http://ap.ironman.com/triathlon/events/asiapac/multisports/gold-coast.aspx#axzz3QpMPx9y0

One of badminton's most prestigious world championships adds yet another feather to the Gold Coast's elite sporting cap in the countdown to the 2018 Commonwealth Games. It marks the first time Australia has hosted the tournament in its 25-year history. More than 1500 of the world's top players, hailing from 45 countries, will travel to Queensland for the event, expected to be televised to a global audience of more than half a billion people. www.sudirmancup.com.au

Bowls Australia returns its largest and most prestigious bowling event, the Australian Open, to the Gold Coast. Making the most of the stunning backdrop, the week-long competition will see over 4000 bowlers from around the world compete at 14 clubs across the Coast for their share in the AUD$250,000 prize purse. Bowlers from all categories including Bowlers With A Disability and Junior Bowlers will compete. www.australianopenbowlsaustralia.com.au

Pitted as Australia's premier road race, and the first marathon in the country to hold an International Association of Athletics Federations (IAAF) Road Race Gold Label, it's hard to beat this course based on pure scenery alone. They say if you want to post your personal best, the flat, fast course which hugs the Gold Coast's beaches and Broadwater, is the place to do it. Held annually on the first weekend of July, more than 27,000 participants compete in a variety of races including the Gold Coast Airport Marathon itself, Wheelchair Marathon, ASICS Half Marathon, Wheelchair 15km, Southern Cross University 10km Run, Suncorp Bank 5.7km Challenge, and Zespri Junior Dash 4km and 2km races. So esteemed and established is this event, 2017 will mark its 39th year. www.goldcoastmarathon.com.au

If Commonwealth Games sports aren't your thing, check out the other events lighting up the Gold Coast this year.

GRIFFITH OPERA ON THE BEACH - AIDA

Calling all Divas! The Gold Coast is guaranteed to strike a chord as the only destination in Australia to showcase world-class opera on the beach. Enter Opera Australia's production of Aida on Coolangatta Beach. Swap your shades for opera glasses and hit the beach for just six performances, including mezzo-soprano Sian Pendry among the stars. Sun, surf and soprano!  https://opera.org.au/whatson/events/aida-on-the-beach

The Gold Coast roars into action each October when the Virgin Australia Supercars race into town for the Gold Coast 600. On track, the highlight will be the PIRTEK Enduro Cup final in which supercar drivers battle it out on one of the world's toughest street circuits to claim the ultimate endure racing title. The world-renowned Super Stadium Trucks will also ramp up the on-track action with the international spectacle joining Porsche Carrera Cup, V8 Utes and Formula 4, supporting all the Supercar action. The Super Stadium Trucks, dubbed 'the monsters on wheels' generate speeds of up to 220km/h, jump man-made ramps, and fly 100 metres through the air, two storeys off the ground. Off track, events are just as explosive with a huge concert line-up, which in 2016 included including Aussie electro sensation Peking Duk, Birds of Tokyo, The Rubens and The Living End. www.supercars.com

This esteemed golfing event on the Gold Coast hits a hole in one every time. Boasting a total prize pool of $1.75million, it attracts some of Australasia's best golfers who compete at the RACV Royal Pines Golf Course. Consisting of the Green and Gold nines, the championship course boasts tight fairways, undulating greens and immaculately manicured swales, with each nine having its own distinctive challenges. If all that's double Dutch to you, don't worry. You'll probably recognise the names of a few past champions including Greg Chalmers, Adam Scott, Robert Allenby and Peter Senior. www.championship.pga.org.au