Queensland Ingredients: What Sets Us Apart 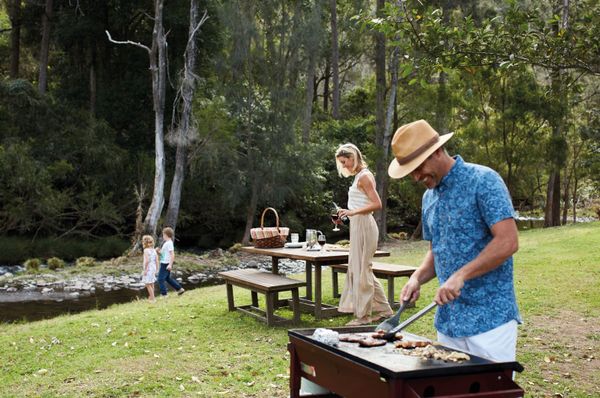 Surely, it's the sunshine, or the refreshing tropical rains, or is the clean air itself? When it comes to unique and flavoursome food ingredients, there's definitely something in the water, and soil, here in Queensland which ensures we deliver some of the most innovative produce on the planet. From seafood to fruit and nuts and beef, you can travel the globe in search of something similar, but there's some food that is simply Queensland to a Q.

Some people refer to these as the “poor man's lobster” but there is nothing paltry about tucking into a bug, plucked fresh from Brisbane's Moreton Bay. The United Nations Food and Agriculture Organisation refers to this delicacy as the “flathead lobster”, in Australia it's officially the “bay lobster” but mention a Moreton Bay bug and even a Sydney socialite with salivate in anticipation. Once cooked, these fleshy creatures can be eaten cold and served on their own or in a salad (Asian herbs and spices make this a delicious Modern Australian dish), or warm, with a mornay or chilli cream and garlic sauce. You'll have the memories of Moreton Bay in your mind and mouth for ages after eating one of these.

Don't be fooled by its official name of The Kensington Pride, or you could be tricked into thinking you were in the old Blighty. Here in Queensland, where it originated, it's known as the Bowen Mango, named after the Whitsunday town in which the first tree was planted.  Bite into one of these babies and it's like Queensland has exploded on your tongue with its sweet, juicy flesh. In fact, nothing quite says summer until you've stood in the back yard and enjoyed the sticky sensation of mango juice roll down your chin. Enjoy this fleshy fruit on its own, or add it to a salad, curry or chutney. You may recall that Hugh Jackman and Nicole Kidman spent much time in Bowen while filming the movie Australia. We can't be certain, but surely they ate a Bowen mango or two.

There are prawns and then are Mooloolaba prawns. Once you've wrapped your mouth around the word Mooloolaba, head straight to a seafood shop, or restaurant which stocks these delicious creatures trawled straight from these Sunshine Coast waters. Fresh, fleshy, salty and colourful, these are some of the most coveted prawns in the country. While the word Mooloolaba is said to originate from the Aboriginal word mulu, meaning snapper fish; or mulla, meaning red-bellied black snake; we're pretty sure the modern interpretation means prawn. You can do pretty much anything with a great prawn, but we reckon keep it simple. Grab some fresh white bread, an avocado, a lemon, some salt and pepper. Peel your prawns, whack them on the bread, and you have one of the best meals you're ever going to eat. Even better, do it while looking over the ocean, at Mooloolaba, of course.

There's not a Queensland kid alive who didn't grow up in the 1970s with a hammer or a brick in one hand , and a bunch of macadamia nuts in the other, smashing the hard shells (and once or twice their fingers) trying to extract the nut inside. Sure, it was hard yakka, but it was worth it. While you probably won't find too many kids doing this these days (someone invented nut crackers since then), the nutty flesh remains as coveted as it did back then. Also known as the Queensland nut, this species signifies all that is good about the Sunshine State. Yeah, we can be a little tough on the outside, but it doesn't take much to crack open our exterior and you'll be delighted with what's inside. Macadamia nuts have made somewhat of a resurgence in restaurants in recent years, and you'll find them in all sorts of recipes, but one of the coolest ways to enjoy this treat is to eat a macadamia nut ice-cream. Mammino Gourmet Ice Cream at Childers, on the Southern Great Barrier Reef, makes one of the best around.

For centuries, Queensland's Aboriginal people used to travel for hundreds and hundreds of kilometres to the Bunya Mountains in Southern Queensland Country to gather, meet and celebrate the bunya nut harvest. While this ancient tradition is no more, the Bunya Mountains remain one of the most beautiful spots, with its giant bunya trees and rainforests packed with walking tracks, cosy cottages and an array of wildlife. Bunya nuts, which are similar to a chestnut, have made their way into the vernacular and restaurants in recent times. While some use them in baking cakes, one of the most interesting uses of the nut is a Bunya nut pesto which is made around the South Burnett region. Mixed with a bit of Macadamia nut oil, and it doesn't get much more Queensland than that.

OK, so it's becoming apparent that we're a bit nutty in Queensland, but in the nicest possible way. The last word in nuts belongs to the Kingaroy Peanut, grown in Southern Queensland Country. Clearly there's something in the rich, fertile soil here, as you will find nuts galore. And while these nuts are lovely on their own, the fine folk at The Peanut Van in Kingaroy have probably come up with the most uses for this food source. You can have them pretty much any way you like, and by this we're talking Salted, Kurry, Hickory Smoke, Barbecue, Salt and Vinegar, Chicken, Garlic, Chilli, Chilli & Lime, Mexican Delight, Mussaman Curry, Toasted, Dry Roast, or Horseradish. There's also a range of sweet-flavoured Kingaroy peanuts including Ginger & Honey, Honey Roast, Butterscotch and Caramel, Chocolate Coated and Cinnamon Sugar.  And that's before we even get to the recipes themselves. Best to head there yourself. Make sure you're hungry.

A combination of rich volcanic soil, high rainfall and humidity makes Buderim on the Sunshine Coast the ideal place in which to grow ginger, something it has been doing since before World War One. These days, Buderim ginger is on the tip of tongues around the globe, as is considered one of the world's finest gingers. There are so many uses for this product, and one of the best ways to experience this is to head to Buderim Ginger itself, a tourist experience which tells the whole story of this fascinating spice. There's ginger drinks, sauces, jams and lollies, as well as loads of sweet and savoury recipes in which you can use ginger.

It would be remiss of us to mention Queensland products without reverting to the world-famous rum which put Bundaberg, in the Southern Great Barrier Reef, on the map. In fact, it was an oversupply of molasses after the sugar from the Queensland canefields was extracted, which lead to the rum being manufactured. And the rest, as they say, is history. Not far from the Bundaberg Rum Distillery, you'll find Bundaberg Brewed Drinks, home to that other refreshing export, Bundaberg Ginger Beer. Besides drinking these brews, you'll find plenty of innovative recipes. I mean, who ever heard of a Queensland Christmas without a Bundaberg rum ball?

As the crow flies, it's not that far from the Queensland capital, but Crows Nest has been making its own mark since it established its own soft drink and syrup flavouring factory in 1903. Formerly known as Crows Nest Cordials, it has since changed to Crows Nest Soft Drinks and is best known for its black, sweet Double Sarsaparilla. There's 17 soft drink flavours on this menu – most of them containing no preservatives, as well as 6 coffee syrup flavours; 15 milkshake flavourings; 11 ice-cream toppings; and 17 types of cordial. Savour this sweet story of success and survival, the beauty of Queensland bottled in all sorts of colours and flavours.

There are so many inspiring beef stories around Queensland, home to some of the best primary producers in the world, but if we had to select just one, it would be that of Christina della Valle, who sailed into the Whitsundays 20 years ago. Fast forward and Christina is now one of the country's few producers of beefalo – a cross between American Bison (buffalo) and cattle. This curious blend produces a lean, healthy red meat which is low in cholesterol and high in protein. Christina also produces free-range Berkshire Gold pigs. All of the animals here are grass fed, and there are no hormones involved, so you have the truest taste of Queensland, infused with some serious innovation.