The Great Barrier Reef: Why It's The Best Managed Reef In The World 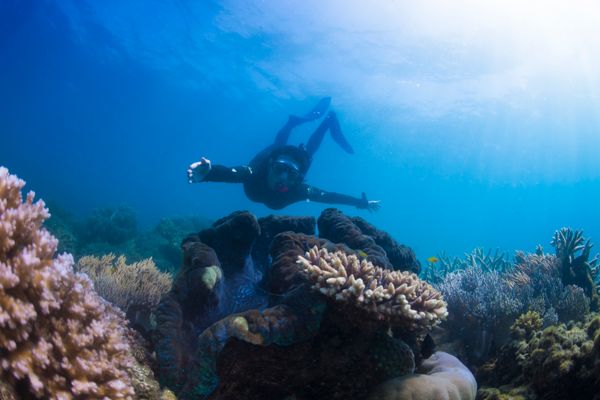 The reef's biodiversity is so incredible that UNESCO noted: “If only one coral reef site in the world were to be chosen for the World Heritage List, the Great Barrier Reef (GBR) is that site.” It joined the list in 1981.

The Great Barrier Reef is at the heart of a vast network of protected marine areas. Every day, Australians across all levels of government, community groups, tourism operators, stakeholders, schools, industry, volunteers and passionate citizens have a role to play in ensuring it continues to be one of the best managed, protected marine areas in the world.

Over the past 40 years, GBRMPA has used the best available scientific information - with input from marine managers, researchers, experts and traditional owners - to manage nature's biggest single living organism.

Reef HQ Great Barrier Reef Aquarium: GBRMPA's state-of-the-art education centre is home to the world's largest living coral reef aquarium, which spawns like the real thing. About 40 volunteers are inducted every year, primarily to educate and engage with visitors.

Since opening the Reef HQ Aquarium Turtle Hospital in August 2009, the hospital has rehabilitated and released more than 70 sick and injured marine turtles back into the Great Barrier Reef Marine Park – this is done at a cost of around $6000 per turtle.

Reef Guardian School Program: Launched the same year as Finding Nemo, the Reef Guardian Schools program is pulling out all stops to cultivate the next generation of eco-warriors. Experts work with local schools, community groups, councils and industry to encourage them to take action to ensure the long term action to ensure the long-term health of the reef.

Eye On The Reef: This environmental monitoring and assessment program enables anyone who visits the reef to play an active part in its long-term protection. All assistance is invaluable – whether you have five minutes to spare or can commit to regular surveys – to help build a broader picture of reef-wide ecosystem health and resilience. For those with more time on their hands, online training packages have been developed for Rapid Monitoring Survey and Reef Health and Impact Surveys. Alternatively, simply download a smartphone app to send in real-time sightings of marine animals, reef health and incidents.

Understanding Dwarf Minke Whales: In 2003, GBRMPA joined forces with researchers and tourism operators to better understand the biology and behaviour of dwarf minke whales which visit the northern Great Barrier Reef in winter months. As part of this, tourists who join operators endorsed to conduct swim-with-whales encounters automatically moonlight as citizen scientists, with each operator required to provide data to the Minke Whale Project (James Cook University).

Reef 2050 & The Great Barrier Reef Biodiversity Conservation Strategy (2013)
Reef 2050 is a long-term sustainability document provides an overarching strategy for protecting and managing the Great Barrier Reef across the following themes: biodiversity, health, heritage, water quality, community benefits, economic benefits and governance. GBRMPA and its stakeholders have openly acknowledged that some parts of the reef are under pressure and this document maps a way forward to improve the health and resilience of the reef amongst key stakeholders - government, environment groups, community and the traditional owners on a shared pathway.

GBRMPA has won a myriad of awards recognising excellence in protected area management. This includes the prestigious Tourism for Tomorrow award (World Travel and Tourism Council, May 2007).

GBRMPA also works in partnership with tourism companies on a number of innovative initiatives that involve the ongoing protection of various marine sites. These programs include:

Sightings Network: Tourism operators, crew and their guests report any unusual or significant sightings of marine-life on the Great Barrier Reef to the GBRMPA. This may include sightings of whale sharks or events like coral spawning or algal blooms. GBRMPA uses this information to assist in its monitoring and management of the marine park.

High Standard Tourism Program: Through this program, GBRMPA encourages tourism companies to adopt sustainable and responsible practices when engaging in tourism activities on the Great Barrier Reef. As part of this program, the GBRMPA rewards tourism businesses that are certified through Australia's ECO Certification program – a best practice program based on the principles of economic, environmental and social sustainability.

Operators Leading The Way In Reef Conservation
Sworn to lifelong protection of the reef that is their lifeblood, these tourism operators are turning their skills to conducting valuable research in the name of conservation.

Quicksilver Cruises' Reef Biosearch: One of Cairns' most popular day cruise and dive operators, Quicksilver Cruises has the largest team of marine biologists outside of government agencies. Created in 1986, Reef Biosearch's aim is to provide education and awareness through research into both the natural and man-made impact on the reef.

Previous research has involved water nutrient level testing and monitoring, giant clam population mapping and mortality (after all they're one of the Great Eight iconic wildlife attractions on the Great Barrier Reef), as well as jellyfish research.

Research on the Minke Whale Project started in 1996 when the first field studies commenced aboard John Rumney's then exploration and adventure vessel, Undersea Explorer. As well as direct university and PhD led study, the Project relies on partnerships with tourism operators, industry bodies and regulators like the Great Barrier Reef Marine Park Authority (GBRMPA), not-for-profits and community organisations to gather data and records.

Here, visitors to the reef and the tourism operators themselves play an important role in the data collection aspect of the research; photographs and sightings by the public are added to the research catalogue.

Mike Ball Expeditions' Nautilus Study: Mike Ball Expeditions partners with research bodies to help monitor environmental conditions and data collection. As part of these programs, Mike Ball staff report on coral bleaching and Crown-of-Thorn sightings for GBRMPA, and make contributions to the Eye on the Reef and Reef Guardian efforts, among others.

In 2012, Mike Ball Expeditions partnered with Central Queensland University's nautilus capture and release program, to monitor behaviour and develop conservation practices for this ancient cephalopod, which is considered to be a 'living fossil'. Although typically they live at depths between 150 to 400 metres, Tropical North Queensland's Osprey Reef attracts nautilus, and other pelagic species like octopus and squid to much shallower depths.

Mike Ball's Spoilsport vessel assists the nautilus research program by operating expeditions to Osprey Reef, where divers set traps to capture nautilus for observation and tagging before releasing them back into the wild. Divers must be experienced to take part in the choice of four or seven day expeditions.

Through the EMC tourists are actively helping to protect the reef for generations to come. All revenue is channelled into management of the Marine Park, including education, research and policy development. This revenue formed up to 20 per cent of the Marine Park's total operational expenses, at $52.450 million in 2015.

Research and Projects – Decoding the secrets of the reef
The Great Barrier Reef is arguably the world's largest scientific laboratory. Projected investment in the coming decade is estimated at more than $2 billion for research and management activities on the reef and in the adjoining coastal catchments.

GBRMPA works closely with Australian Institute of Marine Science, The Great Barrier Reef Foundation, The Reef & Rainforest Research Centre and James Cook University, but the reef is also home to a network of internationally-acclaimed research stations (see list below) and countless other field study projects on the reef (by the scientific community, tourism operators, corporate and citizen scientists), making it the best studied tropical marine eco system in the world.

The team at the Reef HQ Great Barrier Reef Aquarium have initiated a highly successful coral propagation program that is now a routine part of Reef HQ Aquarium operations. Current research studies are looking at minimising environmental impacts at Reef HQ Aquarium, Reef Recovery; Control of algal outbreaks; Hammerhead shark husbandry; Turtle DNA collection; Sponge Reproduction: looking at how we can farm sponges sustainable; investigating how damselfish offspring learn to escape predators and is this passed down from parents; as well as the development of an Underwater Coral Guidebook.

What Else Is Australia Doing To Ensure Long-Term Sustainability?

Queensland is also taking action by…