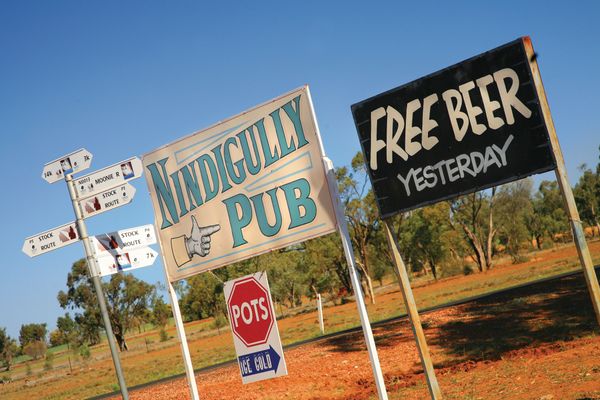 Queensland, and Australia in general is well known for its quirky place names, many of them originating from local Indigenous dialects. Wrap your tongue around some of our fabulous offerings in Southern Queensland Country.

Goomeri
Allegedly derived from the Aboriginal word meaning “broken shield” Goomeri, in the South Burnett, is best known for its annual Pumpkin Festival. Enjoy a handmade pie year round at The Pumpkin Pie Cafe or head to the Olive Shop at Springbrook Farm, about 30km from town, to stock up on local olives, marinades, relishes and oils. Joe's Grand Hotel Goomeri has also been totally renovated to its original art deco past and the Fork Inn B&B is decorated true to its period history.

Toogoolawah
Toogoolawah was settled in the early 1900s as a service town supporting the local dairy industry. Today you can stop in at the historic Nestle condensed milk factory, which has been transformed into an art gallery and cultural precinct. This picturesque town in the Brisbane Valley is also a popular place for sky divers and flight enthusiasts.

Toowoomba
These days Queenslanders refer to Toowoomba as the Garden City but the local Indigenous meaning is less than flattering. The Aboriginal translation means “swamp” or “where the water sits down” which is a far cry from today's darling of the Darling Downs where you'll find organic food, edgy art, eclectic coffee shops and more than 150 public parks.

Wondai
Meaning “dingo” or “native dog” Wondai in the South Burnett is a town that celebrates its heritage. The award-winning South Burnett Timber Industry Museum showcases the region's early settlement and includes a Woodcrafters' Workshop and gift shop where you can buy locally produced woodcraft. Be sure to try a local wine at one of the historic hotels dotted around the district.

Nindigully
While no translation appears to exist for Nindigully, don't let that stop you from going to this charming town. More specifically head straight to the colourful Nindigully Pub where the 1999 Australian film Paperback Hero, starring Hugh Jackman and Claudia Karvan, was filmed. Perched on the banks of the Moonie River, the pub was built in 1864 and has been a top spot for a beer and a yarn ever since.

Kaimkillenbun
Situated 24km from Dalby at the foot of the Bunya Mountains, Kaimkillenbun is the longest single place name in Queensland. Locals call it “the Bun” which is sort of fitting, given it's believed to mean “open mouth” in Indigenous dialect. It's also where the little-known Nicole Kidman movie Chase Through The Night was filmed. Check out the historic Bun Pub while you're in town.

Girraween
The Aborigines called it “place of flowers” and Girraween lives up to its reputation with its beautiful National Park. Located right on the border, 260km south-west of Brisbane in the Granite Belt, you'll find plenty of blooms here in the spring. But it's the granite and boulders you'll most remember, particularly the iconic Sphinx formation. Cool your walking feet in crisp creeks, after tackling some 11 marked trails.

Esk
This town doesn't have any Indigenous language origins, rather, it was named after the River Esk in Scotland and England. These days, locals call it Picturesk, which is fitting for this pretty little town. There's some lovely cafes as you drive down the main drag and those who love a good, hearty country race meet should head out here for some old-fashioned fun.

Texas
You're not in Kansas anymore Dorothy but you are in Oz. Texas, Australia to be precise. While this tiny town – two kilometres from Queensland's southern border from NSW - is mostly dedicated to the farming industry, it's a lovely drive worth doing, if only to see how Australia interprets the word. For great coffee and food, head to the Creek House Café, which also has a full garden nursery and gift shop out back.

Goondiwindi
Locals call her Gundy, but the Aborigines named her after the “resting place of birds”. You're bound to find an abundance of birdlife along the River Walk here. While in town, check out the Gunsynd Statue and Museum, dedicated to the Goondiwindi Grey who won the hearts of race goers in the 1960s and 70s.  There's also plenty of shopping and dining options in the vibrant town centre.

Chinchilla
We can promise you a Chinchilla thriller here at least around the biennial Melon Festival time. Considered the melon capital of Queensland, if not the entire nation, you can also go bushwalking, fishing, fossicking and camping in this pretty place, named after “jinchilla” a termite resistant cypress pine.

Cambooya
Derived from the Aboriginal word “yambuya”, Cambooya is the home of the Bull and Barley Inn, which is said to have its own resident ghost. Geoffrey Rush's grandfather once owned the general store opposite the pub. Just down the road, at Emu Gully, head to Cowboy Up Trail Riding, where owner Peter Gould taught Hugh Jackman and Nicole Kidman how to ride a horse for the movie Australia.

The Booie Range
Local Aborigines used the word Booie for carpet snake but you're unlikely to come across too many on your travels out here. Along the Booie Range you will find fantastic wineries, cafés, and boutique accommodation. Check out the Hillview Cottages, high on the range, with its old dairy, church and cottage, all of which have been converted into quirky accommodation with an historic story.

* Operators included are representative of the range available. This list is not fully-inclusive and individual operator information may be subject to change without notice.