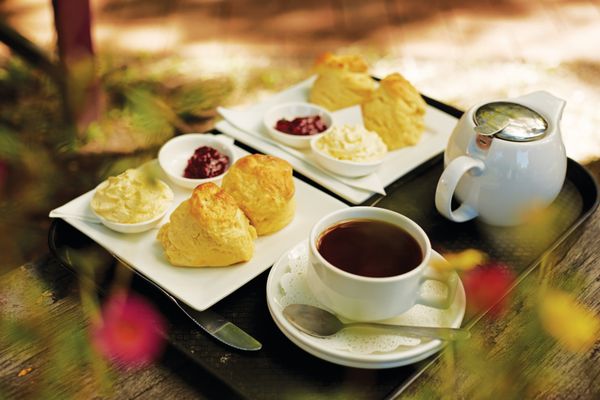 If gastronomical adventures fuel your passion for travel, Mackay offers an unexpected foodie's paradise – from degustation dining in an intimate city cellar to fire-side a la carte amid misty mountain tops, not to mention High Teas en route to the beach or in the middle of a sugar cane field.

“I always tell people who don't know me that I'm the cleaner,” jokes Adrian Connors.

At 28, he's built his dream, establishing a string of world-class hospitality venues, bursting with “Wow-factor” and drawing crowds in their droves. A hip and classy restaurant, funky bar/tapas lounge and slick corporate catering business, all firmly grounded in his hometown of Mackay.

It's the dapper pin-striped shirt, however, that gives him away; this delightfully energetic yet unassuming chef-turned-restaurateur, who prefers to describe himself as an “entertainer” with a dash of “funster”. One who has been tempted, but so far turned down approaches from big city developers to recreate his magic “down south”.

Quite simply, “making people happy” is the order of the day – and night – at Adrian's deliciously yet irreverently named restaurant, BURP, which has a minimum two-week waiting list for a Saturday night booking; alongside his bar, The Dispensary; and sought-after NE Food that deals in corporate catering and functions.

The Mackay boy – one of five sons of Australian country singer/songwriting legend, Graeme Connors – has never sought fame or fortune. Instead, he revels in the fact that visitors are “blown away” by what he serves up.

“If there's one thing I want to be known for, it's that I just know how to create an experience… the Wow-factor,” says Adrian.

In Mackay, his establishments have become foodie institutions.

Downstairs, in The Dispensary, there's a cellar that not only resembles The Holy Grail for wine aficionados, but doubles as a jaw-dropping degustation dining space for up to 10 people.

Upstairs, there's a superbly stocked whiskey lounge, with the back deck ideal for sipping Moet Ice Imperial atop fresh raspberries, strawberries, blueberries, cucumber and mint. An experience you'd have to travel another 200km for, with Hamilton Island being the next port of call for a taste of this oh-so exclusive bubbly.

Indeed, since its introduction to Australia four years ago, Moet Ice Imperial – the world's first champagne specifically designed to be served with ice, without flattening taste or bubbles – is only distributed to venues (bars, restaurants or hotels) that meet specific top-shelf criteria and are situated close to the beach or water.

As Moet Hennessy Australia's Juliet McInnes explains, the driving passion behind the brand is to create an 'experience' that smacks of a sun-kissed, carefree summer holiday – something she says Queensland pretty much created the prototype for.

Currently, only venues like Adrian's, which epitomise the same classy yet chilled-out exclusivity, have been given the distribution nod. Australia-wide, this adds up to just under 50 venues – and, in Queensland, no more than 15.

It's the kind of exclusivity that Adrian reiterates is not about any personal kudos, but that Wow-factor experience he wants to create for clients.

And that's without even glancing at BURP's menu. In fact, Adrian's reputation precedes him to the point that many customers don't even open it, and simply ask “Can you just feed us?”

“Of course, no worries,” Adrian says, grinning widely, adding that in doing so he's also challenged people to become more daring in their tastes, whether converting them to eat oysters (his are flown in from Tasmania and freshly shucked) or serving up chicken livers.

“For me, that's really beautiful, to be able to put food out, knowing what's best for the day and encouraging people to try something new and amazing.

“And there's no reason why you can't have that kind of quality in a town like this. It should be an expectation of customers. Our customers should be pushing us to do greater things, and they have been from the word go.”

Close to a decade ago now, the word “go” involved Adrian and his wife, Vanessa – then both aged 19 – starting a catering business from the back of their car, yo-yoing between parents' kitchens, as they quickly climbed the ladder from private dinner parties to corporate clients.

“Dad actually does our entire wine menu – he was just downstairs sorting out the wine cellar for me. It's a passion for him, and he finds some amazingly interesting wines and that's awesome.”

Of note, the list includes a comprehensive portfolio of Penfolds wines, including the very best vintages of Grange Hermitage, and pretty much the same with Henschke Hill Of Grace. The most recent acquisition was several bottles of Penfolds Bin 170, an extremely limited release Kalimna Shiraz to celebrate Penfolds' 170 year tradition.

“If you want something amazing to try, we also have these Reserve Selection Amarone by recently deceased legendary Italian winemaker Giuseppe Quintarelli,” says Adrian.

“I don't know how, but we managed to acquire two bottles of the 2000 vintage and they're spectacular – obviously, being so rare, means they come with a spectacular price tag. So, they will be waiting for a customer with a very special celebration.

“Originally we focused on Australian wine only, but as our experiences have broadened and our customers have challenged us, we have grown the cellar to be, if not the finest in North Queensland, up there with the very best…"

Equally spectacular are Adrian's plans to extend his foodie reach to include gourmet day-tripper experiences. As he says, it makes perfect sense, with Mackay offering a jumping off point to awe-inspiring destinations, from pristine rainforests to golden beaches and little-known island idylls

Off the grid – don't miss a smorgasbord of other unexpected foodie haunts in and around Mackay, including:

Coffee Devine: a church-turned café surrounded by sugar cane fields on the Mackay-Eungella Rd at Pinnacle, the only route from Mackay to platypus-spotting in Eungella National Park. Like the film, Field of Dreams, Nicole Lethlean believed that if she built a café in the 1914 church, people would come. High Teas are a specialty and everything is cooked on site, with most ingredients also grown in Nicole's vegie patch. Her husband Mark, a one-time shearer, is a dab hand as a pastry chef, with the café also doubling as a show space for stunning local art works, for sale at a fair price. The coffee is sourced from nearby Proserpine and the sugar, of course, is from Mackay.

The Old Station Tea House: this 110-year-old former railway station is the last thing you'd expect to find on the beach road to Cape Hillsborough, where no railway track has ever run. Michele and Dwayne Shea bought Marian Station 20 years ago, relocated it to 231 Cape Hillsborough Road, and converted it into a popular café that oozes old world charm. An Aladdin's Cave of collectables and antiques, including 1950s tea sets used for High Teas and Devonshire Teas. Michele also makes “the best carrot cake this side of the Great Dividing Range” (made with extra pineapple to keep it moist).

Possum's Table (Broken River Mountain Resort): a standout licensed restaurant, matched by the resort's club house feel and cosy fireplace. Chris Ayre, one of the resort's two directors, once spent his life “flying a desk”, running luxury hotels and overseeing new five-star builds around the world. He fell in love with Eungella 12 years ago and decided to bring a five-star experience to the range. One thing he vowed never to skimp on was “exquisite food”. A promise that holds true in the resort's a la carte restaurant.