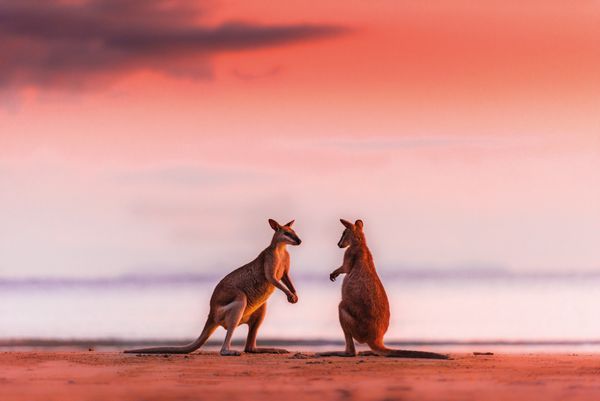 “We wander for distraction, but we travel for fulfilment.”
— Hilaire Belloc

There are no flies on this beach, just the constant overhead traffic of butterflies.

Yes, butterflies! They patrol Cape Hillsborough beach in swarms. Not to be swatted at, their tiny ethereal wings cast imposing shadows over a billion confetti-like sand balls that tickle underfoot; the work of equally frenetic crabs at low tide.

Welcome to Cape Hillsborough National Park – nature's melting pot, just 50km north-west of Mackay, where rainforest meets the ocean, and visitors are guaranteed to share the beach with mobs of resident wallabies and kangaroos.

Taking its place as Australia's youngest volcanic region, Cape Hillsborough was formed from a series of eruptions 30 million years ago, when lava flows covered the area, creating the dramatic rhyolite rock and cave formations that book-end Casuarina Bay.

Cape Hillsborough Nature Resort sits on this bay, surrounded by national park on three sides and an expansive stretch of sand literally flecked with gold. Namely, golden flecks of Mica, a natural earth mineral, which, according to ancient legend is best to walk on barefoot for therapeutic powers said to aid arthritis, stiff joints and even headaches.

I have no headache to speak of, but my ears do pound, thanks to the constant flutter of butterflies. Approximately 25 different species, including the magnificent Ulysses and swarms of Blue Tigers inhabit the national park.

For Park Ranger 005, Brian Kunst, this is Paradise and his work place rolled into one. The best job in the world, he says.

It's a Sunday, and I'm following his advice to walk the “big four” – a clutch of national park tracks based around Cape Hillsborough Nature Resort.

First on my list is Andrew's Point track. At high tide, this involves a 5.2km return hike or, at low tide, a mere 1.5km stroll, with one leg of the track being the beach. I go for the latter, with the added bonus of being able to access Wedge Island.

Children are already tinkering in rook pools that lead to Wedge Island, an outcrop of volcanic rock, popular for snorkelling and fishing enthusiasts.

Walking on to Andrew's Point lookout, 268 metres above sea level, I pass ancient caves that could shelter members of a ghost bat colony. But it's the butterflies that again stop me in my tracks; colourful kamikazes that hurl themselves into wind streams, Cirque du Soleil-style, dipping and weaving like miniature kite surfers.

Below, something rustles in the bushes: perhaps one of 17 types of skink or maybe a legless lizard or fawn-footed melomys.

It's hard to know where to look on this track. The scenery is mesmerising – a passage through cool remnant rainforest that opens to eucalypt forest along the top of the ridge – matched only by bursts of birdsong, against the throbbing percussion of crickets and cicadas.

More than 130 species of birds have been identified in the national park. I'm sure I spot a Spangled Drongo; a glossy black bird with iridescent blue-green spots (or spangles). A bird that's intrigued me ever since I read its name on the running order of more than 40 birds recorded on the album, “Songs of Mackay”.

I play the CD on the drive from Mackay to Cape Hillsborough; the perfect accompaniment when motoring through lush valleys and sugar cane fields, winding coastal roads and mountain tops.

One-time Mackay resident Kim Kirkman – perhaps better known as the Queenslander who co-owned and directed Australia's internationally acclaimed music ensemble, The Ten Tenors – recorded, composed and produced the album as his “gift back to Mackay… a gentle, healing place”.

Kim tells me the album tracks a day in the life of Mackay, from waves breaking on the beach to the dawn chorus of crickets and cicadas; the trill and whoop of soloists among endless birdsong; midday crackle of cane fires; an afternoon thunderstorm; the raucous dusk chatter of lorikeets and fruit bats; and a finale of barking owls as night falls.

It took seven months to record and produce – an experience that Kim says opened his eyes to the incredible diversity of fauna and wildlife in and around Mackay.

Time, is exactly what Park Ranger 005 recommends to appreciate the pure beauty of Mackay's national parks.

“The thing is to just sit, listen and observe, even for 15 minutes,” he says. “You'll be surprised at what you see.”

A few days earlier, on a walk through the Hidden Valley (Yuibera trail, to use its Aboriginal name), Brian is not so keen to linger on one section of the track, adjacent to large circular piles of leaves. The kind my father raked up for me to run through as a kid.

“No, I wouldn't be doing that,” Brian says. “They're brush turkeys' nests. Have you heard of 'scrub itch'? Well, the nests are also home to scrub mites, which are very fond of warm places. Some people are scrub itch flavour and some aren't. Me, I'm definitely scrub itch flavour.”

As we walk on, swarms of Blue Tiger butterflies perform aerial displays, close enough to touch.

Brian also tells me Hidden Valley, a 1.5km rainforest circuit which opens on to the waters of the Great Barrier Reef, has great historical significance to the Yuibera tribe, the first inhabitants of the area, pre-dating European settlement.

He shows me ancient remains of a stone fish trap and, later, on a walk through the Diversity Boardwalk (a 1.2km track that meanders through Melaleuca woodland, mangroves and open eucalypt forest) he points out the largest “midden” he's ever seen.

Ancient middens, Brian explains, were formed when Aboriginal people collected shellfish from mangroves, roasted them over open fires, ate the flesh and discarded the shells onto a pile. The people also gathered to trade food, produce and tools, with the possibility too of meeting future husbands or wives.

Not everyone is lucky enough to have Park Ranger 005 as their personal guide – although many visitors who return to Cape Hillsborough year after year know Brian by name.  He's possibly the happiest chap I've had the good fortune to meet.

In fact, 007 has nothing on him, although Brian does tell me there are a couple of 007s in the state, but they're “pretty specialist” and rarely seen on the beat.