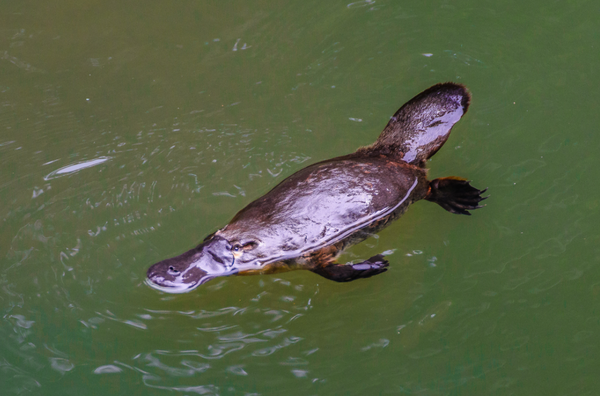 For centuries, the platypus – the most peculiar of all Aussie icons – has beguiled and befuddled anyone lucky enough to encounter it. Shelley Thomas goes in search of “Old Man Platypus”, only to discover a world-first scuba dive with his descendants in an equally intriguing location. Smack bang in the middle of Queensland's sugar cane country.

A township nestled in Australia's sugar cane capital, on the doorstep of the nation's largest continuous stretch of sub-tropical rainforest.  Finch Hatton, 80kms west of Mackay is arguably the last place you'd expect a seasoned PADI scuba diving instructor to set up shop.

“It sounds crazy, right?” quips Luana, the brains behind a unique ecotourism venture, Rainforest Scuba, offering a world-first opportunity for people to experience a freshwater scuba dive with platypuses in Oliver's Pool.

It really is a magical experience when you first see a platypus – particularly when sitting quietly, watching them underwater.

“The great thing too is that platypuses are not at all bothered by scuba divers, because we're dark and blow bubbles just like they do. I was over the moon when I first encountered the girls at Oliver's Pool.”

The girls, as Luana affectionately calls them, are what she refers to as three “resident” female platypuses: Penelope, Laticia and Anita.

Dr Tom Grant, a biologist studying the platypus, based at the University of New South Wales, chooses an entirely unscientific term – “mind blowing” – to describe what he witnessed at Oliver's Pool.

“In the 40 years that I've been studying platypuses, I've never seen anything like it,” Dr Grant says matter-of-factly. “You can even stand on the banks before it gets dark and watch a platypus dive to about two metres or more and forage around on the bottom, pushing things aside and actually get into feeding. That's unbelievable!”

Ironically, he learned to scuba dive back in the 70s, when he first started studying the platypus and wanted to observe its underwater behaviour. He soon gave up. The problem being that everywhere he dived was in “pretty turbid water”; a common feature of platypus habitats, solely located on the eastern side of Australia.

“It's normally the kind of water in which you can hardly see the end of your arm,” he explains. “I think in all the time I went diving back then, I saw one platypus that swam close to me and another one on the surface, which I actually didn't see until it touched my mask and we both got a shock at the same time.”

“I saw males and females grab each other's tails and circle around. I don't think I've seen that more than twice before. I saw one male chasing another and watched three or four episodes of platypuses getting up on logs or out on the bank to groom.”

The next day, sitting with Chris Ayre, a director at Broken River Mountain Resort, two platypuses appear at one of the viewing platforms, including the smallest one Chris reckons he's ever seen in 12 years.

It's well past 9am. A time considered outside recommended platypus spotting hours – generally falling an hour or so before dusk and the same period after dawn. It's at these times that people are most likely to see platypuses diving to forage for prey (insect larvae, shrimp and worms) at either end of all-night feeding sessions.

Chris knows there's always the chance that platypuses will emerge from their burrows at different intervals during the day, particularly around mating season, which starts a couple of weeks earlier in Queensland, running from late July to September.

Oddly, David says the high tourist footfall worked in his favour: “Platypuses, which in many places are very, very shy, at Eungella are habituated to people. They're seen almost guaranteed every day.”

The only drawback, he adds, is that the water is too murky to film below the surface.

Back at Oliver's Pool, I'm standing on the banks sizing up river pebbles that I can see perfectly on the bottom.

I spot a cormorant perched patiently above. An opportunist that dives alongside platypuses, dining on small fish and shrimp flushed out by his companions' foraging – a fascinating game of tag-team.

While Mr Cormorant is clearly unruffled, I desperately scan the water for any sign of Penelope the platypus and friends. Ever the optimist, Luana takes pains to explain that she can only ever promise a chance of seeing “the girls”, particularly during a daylight scuba dive. A bit like flipping a 20 cent coin.

On this occasion, the odds are not in my favour. But that's the beauty of nature and, like so many others, I'm hooked for life.

Penelope: you're on my “bucket list” to come back.