Time Out For High Flyers In Mackay 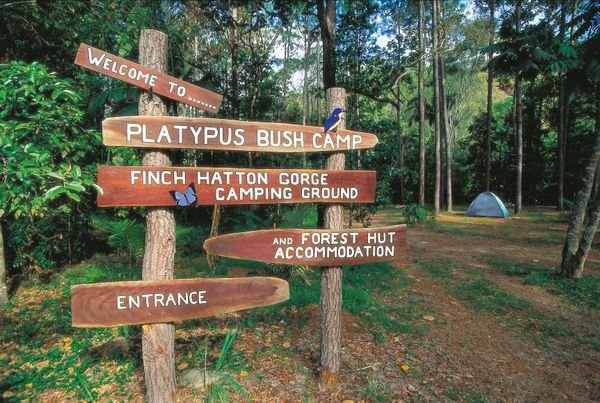 It's the kind of thing that happens in the movies. Indiana Jones meets Avatar, strapped to a high wire and suspended above an ancient rainforest… although minus the evil Hollywood sub-plot. Shelley Thomas overcomes a mild aversion to heights for the ride of her life.

“The idea did come straight from the movies,” says Dave Lowe. Not Indiana Jones or Avatar, but the 1992 film Medicine Man starring Sean Connery as a researcher who uses a flying fox to harvest a cancer-curing flower in the Amazon rainforest.

“We watched that a dozen times, and I got really excited about the possibility of setting up a flying fox, which some people call a zip line, that puts you in control of your speed.

“In the movie, they've got a thing where they also lift you up and down. I had to simplify that because it was going to be too complicated, but otherwise it's just like the movie.”

As Dave talks my knuckles turn whiter and my mouth feels like I've swallowed the Sahara. I gulp hard and force a smile as he whizzes off down the cable, through palm tops and “camps” of resident fruit bats aka Flying-foxes.

It's not the Amazon, but Finch Hatton Gorge, home to pristine rainforest, eclectic wildlife and waterfalls – all within an hour's drive of Mackay.

Dave and his wife Donna – one-time Brits who separately travelled to and, as fate indeed had it, met in Australia close to 30 years ago – launched their Forest Flying ecotourism venture in 2002. It was the first flying fox experience of its kind, putting “flyers” in control of speed, thanks to Dave's uniquely designed hand braking system.

No small feat for a man who previously earned a living as a cabinet maker in Hull, Northern England.

Armed with a “can do” attitude and nerves of steel, Dave simply bought a book on tree climbing and a bow and arrow with heavily-weighted fishing line, which he fired over the canopy and between tree tops in order to pull rope, then cable, into position, 25 metres up.

“I'd be standing on branches to fire the fishing line,” he says.

“Once the cable was up, there were a couple of places it was on the wrong side of a tree, so I fed a second cable out and as I was pulling it along I came to one big dead branch that the cable was hooked up on. It broke and I dropped about five metres, like a bungee.”

I try not to think about this as Donna hooks me up on the first leg of the 350-metre cable, assuring me she felt just as nervous on her first go. Initially my plan is simple: to make it in one piece to the mid-way sky platform, where Dave awaits.

No sooner have I clenched my teeth and silently shouted “Geronimo”, I forget my fear of heights as I stare into a thousand blinking eyes. I pull my hand brake and come to a stop, hanging out with resident Flying-foxes; vegetarians, like myself, that feed on fruit and blossoms rather than insects.

It's hard to explain the sense of calm and freedom. I kick my feet like a child, listening to the creek below. There's the smell of rain on the horizon and the flutter of brilliant blue Ulysses butterflies. I feel relaxed enough to hold on to the harness with one hand, while I take photos with the other.

Dave later tells me there are bird-eating spiders in this rainforest.  “They are actually a type of tarantula,” he says, as images of Indiana Jones and the Temple of Doom spring to mind.

“They mostly burrow under rocks and keep to themselves. But one year, one got in downstairs and I put an ice-cream container over it and a piece of paper underneath, you know to take it outside. I didn't want to kill it. And it was nudging it across the floor… a two-litre ice-cream container!”

“I remember one of our first customers was a girl from Finland who had never seen rainforest in her life. It's amazing to watch the transformation in people. The rainforest really has a magical effect.

“I know I've seen some incredible things, like a Wedge-tailed Eagle swoop down and snatch a bat mid-air and fly off. I also saw a Spectacled Flying-fox give birth a few years ago. She caught the baby by the chord and yanked it back up under her wing – born bungee jumping!”

For Dave, living in the rainforest is a realisation of a long-time dream. He came to Australia to “escape the rat race” and lead a green, self-sufficient life.

As part of that, he teaches people about rainforest plants and “bush tucker”. On a guided walk to the forest flying platforms, I taste the tiny translucent white fruit of a Native Mulberry and learn about everything from Native Pepper to Sandpaper Figs, the fact that Sword Grass seeds can be ground into flour and the “robust fiddle head” of a Tree Fern tastes a lot like asparagus when boiled.

It all adds to the real-life “Medicine Man” experience.

Harness up for the ride of your life: www.forestflying.com

Fast fact:
Flying foxes or zip lines (as they are commonly termed in the United States) have drawn thrill-seekers from as early as the 1700s. A British stuntman earned the nickname “Icarus of the rope” when, in 1730, he zipped down a rope attached to the top of London's St Paul's Cathedral, blowing a trumpet.