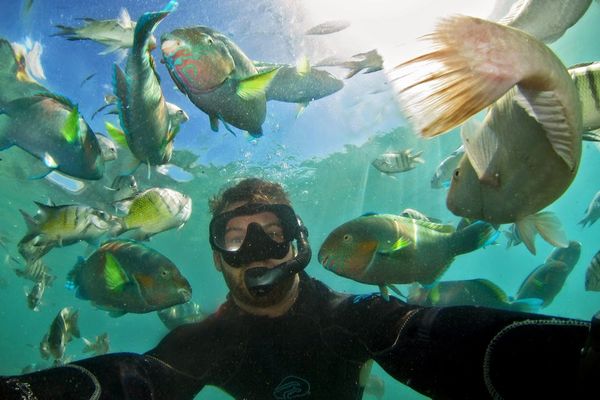 Village Roadshow chose to film DC Comic's Aquaman blockbuster on the Gold Coast not realising that Tropical North Queensland already has their own version.  He may not wear tights, be able to breathe underwater, swim at astounding speeds nor telepathically communicate with marine life, but Daydream Island's Johnny Gaskell is certainly living the life aquatic and that's enough for us.

"Seals don't wear SCUBA gear, so why should I?”

Nine simple words that succinctly sum up the non-tanned man behind the wetsuit on Daydream Island Resort's Living Reef – Marine Biologist Johnny Gaskell or “Johnny Fish” as his cheeky workmates call him.

Look below the surface and you'll quickly see Johnny is as fanatical about the scaly, thorny and wet critters as The Crocodile Hunter was about his Aussie natives.

Look deeper still and you'll note his Facebook profile pic shows him nose-to-snout with a seal. An Instagram page that reads like a storyboard for 'Fifty Shades of Ocean Blue'.  And we're not even going to mention his Youtube page that has holidaymakers the world over going weak at the knees.

All in all, it's pretty surreal stuff for a boy who grew up in the landlocked city of Bendigo – a town known more for its gold rush than its gold fish – in Australia's deep south.

“As a kid I used to spend hours studying the fish and river animals,” Johnny said. “I used to catch them and watch them. Then I realised there was an ocean and something in me shifted and poor fresh water got left behind.”

So, at age 18 he was shipped off to Warrnambool – on Victoria's south-west coast to study science and fisheries management. He walked away with his science degree and a Bachelor of Education, which in turn led to a career moonlighting as a tour guide/dive master with Ningaloo's gentle, but gargantuan, whale sharks (on Australia's western coastline). Similar work followed on boats in Port Phillip Bay and at Victoria's popular Melbourne Aquarium.

Then, it was time to answer the call of the Great Barrier Reef and move to Queensland. For forever.

“I'd been to The Whitsundays 15 years prior, had done a lot of diving and spent time on the SCUBA liveaboards.  The Whitsundays definitely captivated me – there are so many islands around here and they are all unique and wonderful.”

“Honestly, living here you never get sick of exploring new places but, on the off chance you did, you just go back to the places you love.”

“I've even convinced most of my friends to be pretty into the sea,” he said. “They're not as hard core as I am, but they're getting there when they come up to Queensland on holidays.”

Johnny's natural flair for photography – he's bagged a swag of prizes for his fishy portraits and exquisite underwater captures – has helped entice friends and family to visit him and inadvertently led to him dabbling in video, a hobby that's become his latest obsession.

“My love of video is brand new,” he said.  “It's really developed in the last year-and-a-half -  mainly because you can really capture animal behaviour on film. You can't do that as well in photography, it's just a single unbelievable moment in time.”

In turn, his foray into video has also spawned a new interest. On land.  According to Johnny, there was nothing in the commercial world that adequately captured the crackles and rumbles underwater, so he created the soundtrack himself.

“I like to write songs on my keyboard and I've even recorded voice for one or two to go with the footage I've shot,” he said.  “A few people have listened and they've laughed a lot – they thought it was funny that I was singing because my mum is a singer and I definitely haven't inherited her tones.”

Whilst Johnny is writing the soundtrack to his life on Queensland's Great Barrier Reef in his spare time, he's also juggling a day job looking after one of the world's largest man-made living coral reef lagoons. A job that, more often and not, requires him to suit up (in wetsuit, not Aquaman cape) and head out with enthusiastic snorkelers and divers onto the Great Barrier Reef.

“One really cool thing that we've recently developed – our pride and joy really – is our 'Reef After Dark' program at Daydream Island. We basically jump into the ocean at night time and live stream what we see onto a giant screen for guests.”

“Generally people come to the Great Barrier Reef to the thousands and thousands of reef fish that sit in and around the coral reef,” he said. “It's a different world as the sun goes down.  The fish go deep into the reef structure and hide amongst the staghorn and other stony corals and that's when the night predators – big crabs, featherstars (which stand on the end of corals and try to grab everything), sharks and rays – go for a cruise to pick up some dinner.  With Reef After Dark, it's all captured on video for the folks back on dry land.”

“We usually get really close and yep, this is work,” he laughs.  “You should come up – bring your family – and I'll take you out and show you my reef.”

“I had my cousins here last week and they wanted to experience one of the days they kept seeing on my instagram page (@johnnygaskell).  So we did and it was unreal.”

When chatting about his lifelong love affair with all things aquatic, Johnny emphatically denies that he's an ocean nerd or that his oceanic obsession is bordering on maniacal. This is all despite the fact that he once holidayed for fun on Queensland's Lady Elliot Island and barely left the water and also developed an app identifying sea creatures in his spare time.

“Find a better word than nerd,” he jokes.

Well, there's always Aquaman <cue superhero music and a requisite grimace from Johnny> and there's the very bookish 'thalassophile'. But, however you couch it, it all boils down to Johnny living the life aquatic atop one of the world's most treasured natural wonders – the Great Barrier Reef.

“Life,” he says, “Really doesn't get any better than that.”

This Copyright Free Biography is supplied courtesy of Tourism and Events Queensland and is for media use.