Throw off the bowlines: Ahoy Whitsundays! 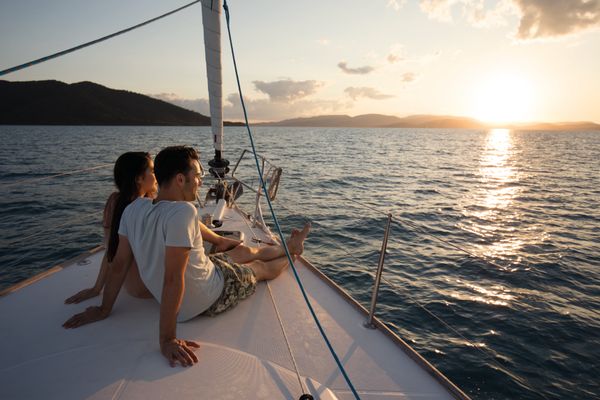 'Twenty years from now, you will be more disappointed by the things you didn't do than those you did. So throw off the bowlines. Sail away from safe harbor. Catch the wind in you sails. Explore. Dream. Discover.' – Mark Twain

Ahoy there! You may need to win the lottery to secure naming rights on your own yacht. But don't dry-dock a 'bucket list' dream to sail off into the sunset.

Australia's #1 sailing mecca, the Whitsundays, promises a bareboat adventure beyond your wildest dreams, punctuated by no less than 74 palm-fringed islands in the Great Barrier Reef's ultimate playground – also the safest cruising area in the Southern Hemisphere. The ultimate freedom ride, where you're the skipper and family and friends step-up as crew.

You don't even have to know how to sail to cast off on this adventure. Comprehensive tuition is all part of the package: check out #GOBAREBOATING! – a collective of five bareboat charter companies, showcasing more than 140 power boats, sailing monohulls and catamarans for hire. The choice is yours.

And, like ships passing in the night, you might just share anchorage with superstars of the ilk of Mariah Carey or even Captain Jack Sparrow himself, aka Johnny Depp, both of whom have set sail around the Whitsundays.

While five to seven nights sailing is ideal, the Whitsunday region is so accessible that even a long weekend adventure is do-able (bareboat charters generally span a minimum three nights' hire). So brush up on your sailing lingo and start packing:

For those short on time, flying direct to Hamilton Island is a great option. That said, most bareboat charter companies are based out of Airlie Beach, a 30-minute drive from Proserpine's Whitsunday Coast Airport.

Wherever you set sail from, be sure to stock up on provisions and consider whether you'd like to pimp your bareboat ride with optional extras, including stand-up paddle boards, fishing lines, scuba gear and even über-luxe helicopter and seaplane tours.

An ideal first stop on your three-night voyage is Nara Inlet, a stunning fjord-like wonderland at the southern end of Hook Island (so beautiful, in fact, that Peter Pan might trade Neverland for this idyll), also renowned as the region's most protected overnight anchorage.

Boasting superb fringing reef at the mouth of the inlet, it's perfect for snorkelling, with the secluded bay also doubling as a jumping-off point to step ashore – and back in time – to marvel at ancient Aboriginal cave paintings, dating back some 8,000 years, in steep wooded hills.

During rainy season (summer in the Whitsundays), Hook Island is also famed for rock pools and a cascading waterfall. Perfect for a refreshing dip before returning to flop and drop on deck as the sun goes down.

That said, even in winter, average day-time temperatures hover around the mid-20s, with June to September drawing an annual pilgrimage of humpback and pilot whales which calve each year in the calm, protected waters of the Whitsundays.

Fishing is also permitted at Nara Inlet for those keen to dangle a line or simply ogle at the sunset. Even the loo has 360 degree views!

After a leisurely breakfast, set sail for Butterfly Bay on the northern tip of Hook Island. A designated green zone, this area of the island falls under World Heritage listing, making it one of the best spots for snorkelling in the Whitsunday archipelago. Expect to come face to face with giant Maori wrasse, schools of parrot fish and the full colour spectrum of reef fish, not to mention majestic manta rays.

Once you've surfaced, a picnic lunch or afternoon tea beckons ashore, where more wonders await in the form of colonies of butterflies. Meanwhile, for diving enthusiasts, there's the option to meet up with dive vessels that operate in the area. If this rocks your boat, best to discuss and book ahead via your charter company.

Alternatively, and particularly for fans of hit American TV series, Modern Family, which shot its 2014 'Australian vacation' episode on One & Only Hayman Island resort, there's an opportunity to explore the island, lunch at the exclusive five star property ($175 / 10am to 3pm / strict dress code applies) or enjoy a quick dip in the resort's unique hexagonal pool. Most recently, Australian actor, Chris Hemsworth, aka Thor, vacationed with his family at the resort. Take note, you can anchor overnight only if staying at the resort.

No trip to the Whitsundays is complete without stepping foot on world-famous Whitehaven beach on Whitsunday Island. Be sure to pack a selfie stick: Whitehaven Beach holds the title of being Australia's most photographed beach and was named the South Pacific's best beach in the 2015 TripAdvisor Travellers' Choice Awards.

For the best views of Whitehaven Beach – a 5km stretch of pure white silica sand – anchor at Tongue Bay and tender across to the beach for a short bushwalk up the hill to the lookout across Hill Inlet. For movie buffs, the seaplane chase in 2008 film Fool's Gold, starring Matthew McConaughey and Kate Hudson, was filmed here.

This destination is worth a full day of exploring and relaxation. So, drop anchor for the night and do as much or little as you like in Paradise. You can even book a heli flight from Whitehaven Beach (talk to your charter operator).

For the perfect finale to a Whitsundays sailing getaway, there's no better place to rediscover your land legs than on Whitsundays' most glamourous island, Hamilton Island, also the location for laugh-out-loud scenes from Aussie classic Muriel's Wedding.

Hot tip: If you happen to be planning a holiday in August, don't miss Airlie Beach Race Week (staged a few weeks before big brother, Audi Hamilton Island Race Week), counted in a line-up of more than 116 of Australia's best events in the best destinations, as showcased on Tourism and Events Queensland's It's Live! In Queensland calendar.

Did you know? The pristine white beaches and turquoise waters of the Whitsundays also give rise to some serious carb-loading events. So, if you live to run like Forrest Gump in some of the world's most spectacular destinations, look no further than the annual Hamilton Island Endurance series, including the Great Whitehaven Beach Run; Hamilton Island Triathlon; and Whitehaven Beach Ocean Swim.