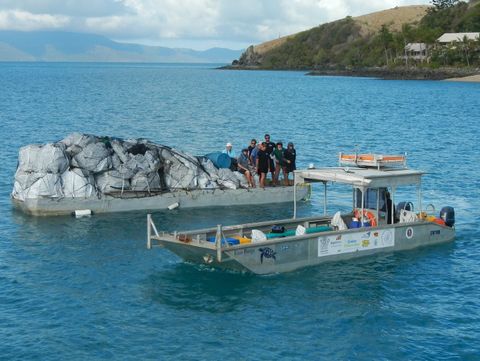 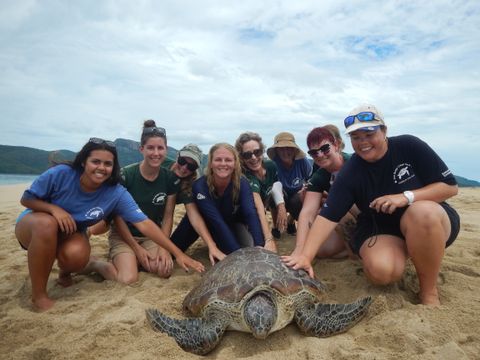 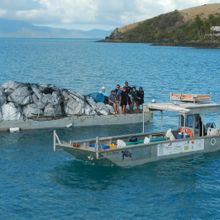 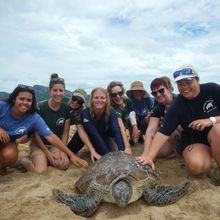 Queenslander Libby Edge is waging war on plastic in and around The Whitsundays, and she's not alone.  Her environmental epiphany came back in 2009, shortly after she watched a 60 Minutes documentary about ocean litter around the Hawaiian Islands and was relieved that her backyard – The Whitsundays – wasn't in the same boat… or so she thought.

Two weeks later she found herself on a remote beach that was littered with plastic.  For Libby, this discovery was a life-changing moment and one that has since seen her use her husband's marine salvage equipment – or as she calls it, his amazing armada - and marshal a small army of like-minded souls to make a difference.

And thus, Eco Barge Clean Seas Inc. was born with a mandate to remove flotsam and jetsam to reduce its impacts, improve the look of the beaches and waterways, save the lives of marine animals, and from a long-term perspective, to educate and reduce land-based litter and littering behaviour in the tropical north.

As Libby says: “Marine litter is one of the most threatening, but also the most solvable pollution issue currently affecting the world's ocean and waterways. “

Most tourists flock to the sheltered and pristine islands of The Whitsundays, but there are 36 bays along the south eastern coastlines that are exposed to prevailing southeast trade winds, which wash up ocean junk on their shores.  After eight years in the business, Libby knows which beaches will suffer after the big winds and acts accordingly, often with international backpackers volunteering to see the reef and learn a thing or two about how to protect it.

From humble beginnings, Libby and her team have significantly expanded their operations with expeditions to the southern Whitsunday islands and beyond - Blacksmith Island, Goldsmith Island, Keyser Island, Linne Island, Thomas Island and Tinsmith Island.  Other key environmental initiatives include:

WHITSUNDAY TURTLE RESCUE CENTRE: Eco Barge together with Fauna Rescue Whitsundays launched a centre to ensure that any sick and injured marine turtles were given the care they need. A related program sees local volunteers reporting on turtle stranding events in the Whitsunday region.

CLEAN STREETS AND CREEKS PROGRAM: According to Libby, the most effective way to reduce the impact of litter is to prevent it entering the environment. With this program, land-based litter is removed in a series of clean ups – 24 to date - that target rubbish found on local streets, creeks and foreshore areas to prevent it washing and blowing into the marine environment.

MACKAY COASTAL CLEAN UP: This program is aimed at local businesses, families and individuals and essentially coordinates the removal of marine debris from beaches in the Mackay region. The sixth successful clean-up was held in May 2015 and has seen around 25,000 kilograms of litter removed from beaches.

These days, a typical working week sees Libby seeking out sponsors, reporting and monitoring… and then four times a month magic happens as she takes her eco barge, volunteers and two crew on the Whitsunday Island's bays and beaches and collects the plastic and debris that is thrown and/or blown away.

She'd go more often if she had the sponsorship.

The impact of this environmental work has been far-reaching: Libby has been a state finalist in the Australian of the Year awards; has received funding from Reef Catchment and 'SunSuper Dreams For A Better World' grant; and she is an Eco Ambassador teaching school children about the reef and appointing Reef Guardians to spread the conservation message.

From a tourism sustainability perspective, Libby has also partnered with local businesses, like Cruise Whitsundays – the largest marine tourism operator in the region – to continue her good work both with the marine clean-up and rescuing stranded marine turtles.

It is work that's helping her patch of the Great Barrier Reef flourish, but one that comes with an even greater personal reward - Libby describes whale breaches, turtles popping their heads to say hello and manta rays surfacing near the barge.

“Each trip we are approached by either turtles or whales, it's almost like they are coming up to the barge to thank us for helping them.”