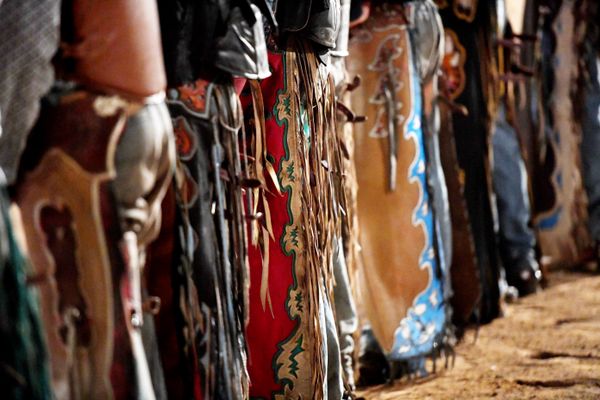 Guaranteed: words you'll never hear on the global Professional Bull Riders (PBR) circuit. Once the chute goes up, time-out breaks don't exist (aside from the occasional broken bone or two) and counting to eight is the ultimate test of endurance.

Queenslander Budd Williamson, 31, something of a veteran on the PBR circuit in the US and Australia, knows it all too well. Celebrating a decade as a professional bull rider, he's on the line-up at Australia's only PBR Iron Cowboy Townsville (17-18 November); one of just three in the world, outside Dallas and Brazil.

Famed as the toughest PBR contest on the planet, the Iron Cowboy format requires the winner to face a whopping four or five of the fastest, biggest bulls in two days, with the aim of staying on for eight seconds. In elite endurance stakes, the bull riding equivalent of IRONMAN triathlons, albeit a cowboy-vs-bull endurance contest (with both considered elite athletes).

Raised on a cattle and sugar cane farm in the rural township of Ayr, 85km south of Townsville, Budd looks every bit a cowboy. But looks can be deceiving.

Sure, he lives for bull riding and holds on to the goal of being crowned world champion, but outside the ring works as a barber, practices Pilates and helps on his parents' farm.

“It keeps me pretty busy, but bull riding is what I live for – it's not the kind of sport you get into as a hobby,” says Budd, shrugging off a litany of injuries: 11 broken ribs, two punctured lungs, a broken collarbone and shoulder/jaw/face reconstruction.

“As a kid, I grabbed every chance I could to climb on something and pretend I was a bull rider – a bucket, dogs, the barrel set up on the farm. I started riding calves when I was four and worked up the ranks to bulls by the time I was 14.”

“It was my sister who introduced me to Pilates about eight years ago before it became so popular,” Budd says. “She opened a couple of Xtend Barre Pilates studios in Sydney.

“The first few times I thought what am I doing in a class full of girls and at the end of the class they're doing it better than me!”

Soon enough, Budd was hooked on Pilates and yoga, and although initially laughed at by other cowboys on the bull riding circuit, has influenced many others to give it a go.

“Riding bulls, you do get injured a lot and need to diversify your training. Pilates and yoga are great to build flexibility and help you remain cool, calm and collected, which is one of the most important things when you get on a bull.

“If you're not calm before you pop in the chute or if you're going at things aggressively, the bull will sense it.”

That said, it's not uncommon to spot Budd limbering up with a few Pilates or yoga moves in the stalls before a competition. He also packs his cordless clippers.

“It comes in handy being a barber,” Budd says, having learned the trade from his father and grandfather before him, who set up the Ayr barber's shop in 1944.

“I'll set up on the side of the road so the other cowboys can have a haircut, which also helps with the entry fee. Bull riding is never going to make you rich, unless you're at the top of the game over in America.

“But it's important to look good when you're out there in front of the crowds.”

Yes indeed! Even for eight seconds or less.

No bull! Done in 8 seconds
What else can be achieved in 8 seconds? In barely a blink of an eye (1.7 blinks, to be precise, in 8 seconds)? Find out here – guaranteed to blow your mind for more than 8 seconds. No bull!

Dust off your cowboy boots: PBR Iron Cowboy Townsville (17-18 November) is just one of more than 100 of Australia's best live events in the best destinations, as showcased on the It's Live! in Queensland calendar.

Townsville: A Town of Firsts
Townsville is not just home to Australia's only PBR Iron Cowboy event and stomping ground of beloved rugby league team, the Cowboys. It also lassoes quite a few world firsts:

Need more inspo? How about 100 things to do in Townsville? For further reading, check out our free e-book on 'Secret reef experiences' from Townsville.

For more information and photos of Budd Williamson please contact: