Australia's Wildest Bachie Has High “Hope” For His New Bird 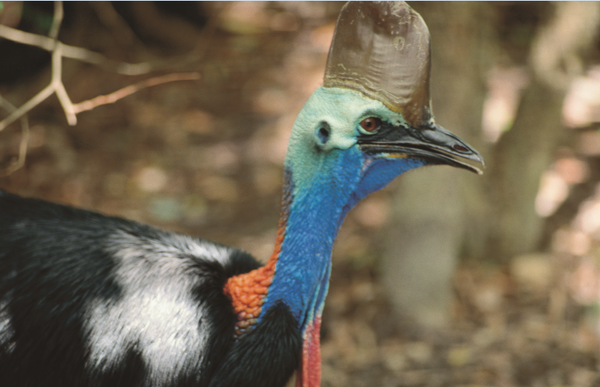 Move over Bachelors Ritchie, Blake and Tim aka #TheBachelorAU, Townsville's wildest bachelor has his eye on a fine, young bird and the courting season premiered at exactly 9.30am this morning.

Only this love game wasn't about a buff bloke meeting a svelte young chick in a glam gown slit to the waist, in the Townsville show of courtship, it was 33 year old Yarabah, Billabong Sanctuary's resident wild cassowary locking eyes - and feathers - with Hope, a three year old captive-bred female cassowary.

But, it wasn't a buff bloke meeting a svelte young chick in a glam gown slit to the waist, in this show of courtship, it was 33 year old Yarabah, Billabong Sanctuary's resident wild cassowary locking eyes - and feathers - with Hope, a three year old captive-bred female cassowary.

Jeremy Hurburgh, head bird keeper and Billabong Sanctuary's own Osher, explained that just like the production of a certain prime time reality show, match making at the Townsville sanctuary has been going on behind the scenes for some time.

“Cassowaries are a threatened species and with mortality hot spots from vehicle strikes, the problem is only getting worse, so successful captive breeding is vital to the cassowaries' survival as a species,” Jeremy said.

“Yarrabah is one of the 31 male and 34 female cassowaries on the Southern Cassowary Population Management Programme. He has successfully bred and we thought he would be the perfect match for Hope, a three year old sexually-mature female who came to the Billabong from Perth Zoo as part of the breeding programme.”

In a move to match the fall of the Berlin Wall, the fence separating the resident cassowary pair came down at 9.30am this morning allowing avian action to begin and the Casanova cassowary, Yarabah, to show his moves.

And it worked. Mr Hurburgh reports that while it took a while for the pair to realise they could cross the now invisible, eventually Hope did trot off to Yarrabah's side of the enclosure and the two have been hanging around together ever since.

“Hope was standing up nice and tall, a sign of dominance and authority. Yarabah was quite submissive, following her around and pecking her back. We have high hopes for an early mating,” Mr Hurburgh said.

In the wild, if a female enters the male territory during mating season, the male displays evident signs of courtship. No roses here, the plumage goes up and the male cassowary begins to slowly circle his love object.

Should our Casanova cassowaries prove lucky, Hope will lay a clutch of light bluish-green eggs in a scrape in the ground and then trot off in a quest for more bachies, leaving Yarabah to do the hard work and incubates the eggs for two months before raising the chicks for a further nine months.  During one season, a female cassowary will mate with two or three males.

Yarrabah, aged 33, is a wild caught cassowary with a heritage from the aboriginal community of Yarrabah south of Cairns and a proven track record of fertility. He came to Billabong Sanctuary from Currumbin Sanctuary on a breeding loan. He, along with a male from Featherdale Park in Sydney, is the oldest males in the programme.

Up until now, a fence has divided the enclosure separating the pair.

Cassowaries are a threatened species and with mortality hot spots through vehicle strikes at Mission Beach and dog attacks, the problem is only getting worse, so successful captive breeding is vital to the cassowaries' survival as a species.

Billabong Sanctuary is one of 32 wildlife parks and zoos Australia wide in the Southern Cassowary Population Management Programme.  Historically, there has been a lack of consistent breeding on non kinship birds in zoological institutions.  There are 31 male cassowaries in the programme and 34 females and in the past 5 years only 16 births.

The cassowary breeding season extends from June to October.  The breeding age for females in the breeding programme has been identified as 3 – 46 years and for males 4 to 35 years.

Cassowaries will live in excess of 60 years in captivity.

Word Count: Author: Shelley Winke.  This Copyright Free Story is supplied courtesy of Tourism and Events Queensland and is for media use. For more information, please go to www.queensland.com or www.blog.queensland.com. For images, please visit http://teq.lookat.me.com.au/ . If you wish to reproduce this content in the online space, please contact the Tourism and Events Queensland Publicity Team. And, last but not least, if you use this material, it would be awesome if you could email us, let us know and, where possible, we'd be happy to amplify the content through our TEQ online channels.