11 Marine Animals You've Never Heard of Found on the Yongala 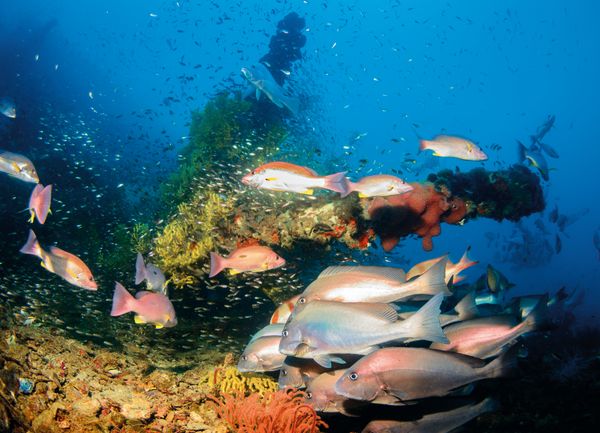 Sit down and watch Nemo and everyone's an expert when it comes sea turtles, manta rays and clownfish.

But, unlike the animation, there are thousands of fascinating creatures that call the Great Barrier Reef Marine Park “home” and it's worth getting to know a few more. One of the best places to do this is the SS Yongala wreck, a luxury passenger vessel that tragically sank in in 1911 with 122 passengers and crew aboard.

Thanks to strong currents transporting plankton past the site, hard and soft corals have clung to the ship's structure, protecting the hull and attracting an astonishing variety and volume of marine life. The SS Yongala is now one of Australia's most celebrated bucket-list dive sites. Here are 11 marine species you'll find on the Yongala.

Grasp a line and descend 15 metres to the top of Yongala's stern to spot round-faced batfish (Platax teira), a curious species known for close encounters with divers. This silver, grey, or brownish fish looks more like a striped pancake than a bat.

Approaching the stern you may encounter a wall of chevron barracuda (Sphyraena qenie), a schooling fish with an elongated silver body boasting around 20 black, chevron-shaped bars.  See them again at the end of your dive as you pause for safety stops on the return ascent.

Veer starboard (the wreck lists to this side) and explore the engine room and visible toilet. Here, you may encounter olive sea snakes (Aipysurus laevis), a sturdy, inquisitive, flat-tailed species that feeds around the wreck in between swimming to the surface to breathe. While venomous, they do tend to be docile.

Continue towards Yongala's bow and at 109 metres from the stern, you may notice a curious creature swimming alone or alongside giant trevally.  The Humphead Maori wrasse (Cheilinus undulatus) is two-to-three metres long, big-lipped blue fish named for the protruding hump on its forehead. Its most interesting feature, though, is the female's ability to change its sex to male as it ages.

Look up! Spotted eagle rays (Aetobatus narinari) could be cruising above you. This beautiful, shy species has a dark dorsal surface covered in white spots, a white underside, several venomous stingers near the base of its tail, and a thick, adorable head with a long snout.

They don't take song requests, but you may spot these gold-coloured, triangular-snouted rays, also known as Eastern shovelnose rays (Aptychotrema rostrata) resting in the sand at 28 metres or trolling the wreck.

As you reach the bow of the wreck, keep an eye out for Queensland groupers (Epinephelus lanceolatus). These green-grey to grey-brown curious giants grow to 2.7 metres long and weigh over 400 kilograms. Crayfish are their main prey, but they also eat small sharks and juvenile sea turtles.

Swim along the hull and return to Yongala's stern for giant morays (Gymnothorax javanicus) -  the largest of all Indo-Pacific moray eels - hiding among the coral. The eel's body is mostly brown with brown spots, its head is yellow to brown, and its smile is wicked.

Proceed to the top of the wreck where lovely white longfin bannerfish (Heniochus acuminatus) search for food. This fish has two broad black bands, yellow dorsal and caudal fins, and a long, tapering dorsal filament, which adds an elegant element to their underwater dance.

The graceful marbled ray (Taeniura meyeni) often cruise this section of the wreck. This ray has a circular disc with a black and white mottled pattern on its upper surface and grow to three metres long and 1.7 metres wide.

With 11 new species under your weight belt, there's no need to wait for Dory to brush up on your Reef biology!