Townsville… A place of history and learning 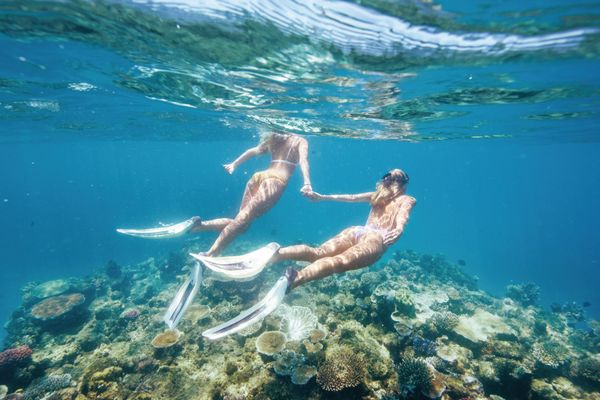 In the heart of Queensland's tropics, overlooking some of the most beautiful stretches of the central Great Barrier Reef, the story of the world's biggest living organism truly comes alive.

Townsville is easily the first place keen minds go to learn about the marine environment alongside those who are passionate about sharing their knowledge. The Reef HQ Great Barrier Reef Aquarium – a 660,000-gallon coral reef exhibit and the world's largest living coral reef aquarium – houses an impressive collection of native marine wildlife. But it's not all static displays and interpretive panels: visitors can play a part in the conservation of turtles on the reef thanks to the onsite Turtle Hospital – a dedicated facility, where sick and injured turtles are cared for and rehabilitated.

Visitors who want to give back to the reef, can immerse themselves in nature through a volunteer program and join the researchers from James Cook University on Orpheus Island. Accommodation is free and you work for your supper.

Below the surface, Townsville has earned serious diving stripes thanks to the rich underwater encounters around the SS Yongala shipwreck. The story itself is a sad one of lives lost, but over time, new reef life has grown up and around the rusting hulk, giving the site an added natural dimension. Filtered sunlight reaches into the depths to reveal an aquatic masterwork of astonishing beauty and diversity, where an incredible array of marine life head in and around to feed.

Giant groupers hang beneath the stern and schools of giant trevally congregate around the wreck, while sea snakes glide harmlessly past you on their way to the surface. You can also spot turtles lazily feeding, gracefully sweeping the rays and thousands of other creatures on the coral-encrusted vessel.

While SS Yongala's been grabbing the lion's share of the diving limelight, Townsville locals are now letting the world in on another fabulous secret, Lodestone Reef. This little-known patch of the Great Barrier Reef is home to big schools of trevally and boasts large colourful coral bommies. And best of all, if it remains a loosely-kept secret, you'll have this little patch of paradise to yourself.

But don't be fooled, Townsville's nonchalant façade also belies a sophisticated foodie scene, which takes full advantage of the bounty of seafood on its shores and is on a par with cities in the southern states.

Immerse Yourself In Nature

World Class Aquatic Adventures
If wreck dives and coral reef islands are your bag, get yourself to Townsville in North Queensland and start exploring.

Site: This stunner is a visual alternative to Wheeler Reef (while it regenerates after Cyclone Yasi) and is located just two hours offshore from Townsville.

Wildlife: Big schools of trevally and a myriad of colourful reef fish are common while turtles, stingrays, whitetip and blacktip reef sharks are often sighted.
Hot Tip: Instagram followers will suffer FOMO just from looking at the colours on this reef.

**This site was damaged during Cyclone Yasi and is in the process of regenerating. See Lodestone Reef as an alternative dive spot**

Hot Tip: This site is rated as one of the best night dives on the reef, with moray eels, epaulette and whitetip sharks and bull rays. During the day, explore the myriad of gullies, canyons, caves and swim throughs.

Site: This site is ranked as one of the Top 10 dive sites in the world and is located 24m underwater, off the coast of Townsville.
Location: Townsville.
Dive Type: Shipwreck / Reef.
Depth: From 15m to 33m.
Visibility: From 10m to 12m.

Skill Level: Advanced.
Known For: One of the best wreck dives in the world, at 110m long, the SS Yongala is one of the most intact shipwrecks (the rudder is intact, though the propeller has rotted) and intriguing maritime mysteries. The BBC's Monty Halls described it as “the greatest wildlife wreck on earth”. It is known for its sheer proliferation of marine life – every available space on the smooth hull is covered – with a coral reef formed around the vessel, offering divers the best of both dive worlds.
Wildlife: Expect to see manta rays, bull sharks, eagle rays, barracuda, giant groupers and all manner of fish. The main feeding action is at the top of the wreck where divers will see Queensland grouper, the largest bony fish on the reef at this site.

Hot Tip: The dive site is easily accessible 30 minutes from shore via the Yongala Express.

It's Live! In Queensland