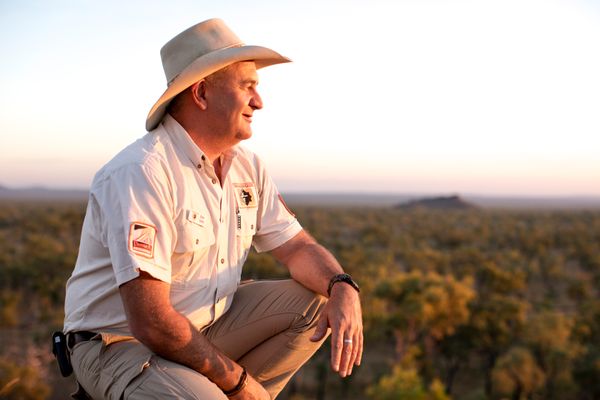 "You know what it's like when you walk past the window of a jewellery store,” says Bram Collins, a strapping Aussie bloke with a drawl like leavened dough rising softly with expectation.

“You see amazing things and then you spot something that makes you open the door and go in. Tropical North Queensland has that same power. It's a store that gets you in.”

Once inside, Bram reckons the best kept secret is the Undara Experience, a geological attraction that de-myths one of the best preserved and largest lava tube systems on the planet; a place some four hours' drive west of Cairns and somewhere he calls home.

Bram first set eyes on the underground formations as a seven-year old when he and his father happened to be in the area fighting a bush fire; the irony of stumbling on a geological treasure made from volcanic fire - because of a bush fire - is not lost on him.

“Dad took me down here and it was huge; 18 meters high, 25 metres wide, collapsed on both sides with massive fig trees growing out of parts of it,” he says referring to the entrance to the Undara Lava Tubes, dubbed the Archway, a magnificently chilly cavern cooled by giant fig trees that transpire moisture like a huge evaporative air cooler.

“Some of the trees were so big, they would have been here when Cook sailed up the coast of Australia.”

Bram's second visit to the Archway was in 1990 as a young adult, and since then he's been on a mission to explain the Archway and the rest of the Tubes to travellers.

“I remember walking in and going, 'Wow, I've been here before',” he says referring to that second encounter. “I had a great sense of de-ja-vu. Once you've seen the archway, you'll never forget it.

Visitors on Bram's (or any of the Savannah guide's) two-hour Archway Explorer Tour hear more scientific explanations than an episode of Big Bang Theory. The story goes that a violent volcanic eruption some 190,000 years ago saw enormous volumes of 1200-degree molten hot lava – probably enough to fill the Sydney Harbour in just six days – spew over the landscape carving deep hollows in the ground. Four to six weeks after the eruption, the walls and roofs around the hollowed areas cooled and hardened, leaving 100 kilometres of perfect arterial action behind. These are the Undara Lava Tubes.

There's also the Wildlife at Sunset tour which is more skewed to David Attenborough buffs than Big Bang Theorists. Asking Bram which he prefers is like asking, “what's your favourite: breathing in or breathing out?”

One is a lava experience where you hear about the history of the lava tubes as well as the history the Collins' family and the local Aboriginal people. The other focuses on Australian wildlife, and in summer, offers the chance to see hundreds of thousands of micro bats flying in and out of the cave.

“The Wildlife at Sunset tour is incredible, especially in summer”, says Bram “It's almost like you are an insignificant observer. There's something incredible going on all around you and it continues despite your presence; snakes feeding, birds swooping down catching bats and there you are in the middle of a feeding frenzy, feeling completely safe.

For Bram, the whole Undara Experience is a totally remarkable experience.

“Even after seeing it tens of thousands of times, even after being a tour guide for 27 years, every single time it takes my breath away.”

It is indeed the rare treasure in that Tropical North Queensland store.